Surely one test of a friendly sidewalk or other place to walk is whether there is need for a safety railing or bollards. Of course, over a river, cliff, or other vista, a railing might be necessary. But who likes to walk along a highway, where there is no vista?

Unfortunately proposed along a State highway, the Downtown Welcome Center has great design work from CB|Two, but without additional work on the walking environment, it risks being insufficiently inviting and effective.

Other interesting agenda items are:

Continuing the debate on the Downtown Economic Improvement District

The intergovernmental agreement on the walking and bicycling connectivity study for the Kroc Center.

Councilor Dickey confirmed that the proposed smoke-free parks ordinance was tabled from the October 25th meeting and will be carried forward, meeting date TBD. 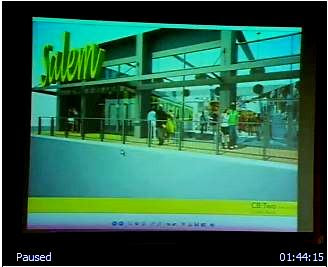 (Screen captures from CCTV stream of October 11th, 2010, Salem City Council meeting)
Walking along a highway is exactly the weak spot in the Go Downtown Salem proposal for a Welcome Center in the Liberty Parkade, across the street from the Conference Center. (Here's the first impression, and a few more photos, from the Oct 11th Council meeting.)

The signing is lovely, the design is jazzy and modern - but the safety railing emphatically says, "it's not safe to walk here." 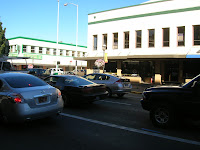 The problem is not information. The problem is the traffic moat formed by highways 99E and 22: four lanes of Liberty, the dual turns from Liberty onto the Parkway, and the four lanes of Ferry/Parkway. Without traffic calming or choosing a different site where the bollards are not necessary, the design work will be for naught. 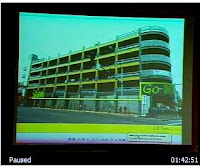 Here's an elevation from farther away. You can see the string of bollards along the Parkway/Ferry. "Go Downtown" and "Salem" is bold and attractive.

Here is the current streetview for reference. 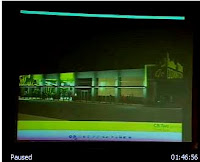 At night the interior would stand out from the parking garage - though the upper floors of the garage won't be quite so dark. Still, note the horizontal line of the safety railing.

At the October 11th Council meeting, Councilor Nanke suggested that a skybridge between the parkade and conference center was the solution, as he was reluctant do to anything to encourage increasing numbers of people walking to use the crosswalk on Ferry and thereby impede auto traffic. Getting people off the sidewalks is not the solution; rather, getting more people on the sidewalks is! 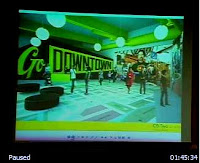 Fortunately, the interior is another matter. The best part of the proposal might be the interior. The map, perhaps keyed to historic properties, looks great! You can imagine giving directions by walking across the map, a full kinesthetic experience.

The proposal is also caught up in deliberations about the future of the Downtown Economic Improvement District. In an addendum to the October 25th meeting, officials from Pioneer Trust Bank suggested that

The EID assessment itself is not popular among the downtown property owners we have had discussions with....Since the EID became effective, vacancy is up while rental rates and property values continue to slide....Go Downtown is widely perceived as an assessment funded event planning service.

Luring people from the Conference Center into the downtown core is a real problem and deserves attention. CB|Two has done terrific work, and it would be sad to waste it. But it is difficult to argue that without traffic calming and improvements to the walking environment, a fancy welcome center in this location can do the job by itself.
Posted by Salem Breakfast on Bikes at 9:15 AM

I think you should have bollards installed. They will provide crowd control where needed; and they also can be used for safety and security. If you are concerned about design or style, check out McGraw-Hill. Even though I work for them, I have to say I have never seen so much information about bollards from one company. There are so many choices that you will definitely be able to find ones that appeal to people.