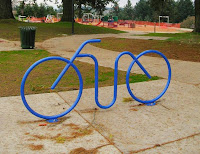 Lone Oak Park will be the newest park in Salem, so new, in fact, it doesn't have name yet. Situated on Mildred Lane at the crest of the hill overlooking the Battle Creek hollow, it is lovely without being fancy or showy.

It is also somewhat isolated. It is, in fact, at the city limits and on the edge of the urban growth boundary.

In an area still being developed and distant from most destinations, it has a very low walkscore of 12 on a scale to 100, meaning it is highly "car-dependent." Schools are not also very walkable, either requiring significant travel on roads without sidewalks or requiring crossing busy arterials at intersections uncontrolled by traffic signals and marked crosswalks.

It is in transition. But in addition to transitioning from less to more developed, it could also be changing in the way it is developed.

Writing in the Statesman on Saturday about the park, Elida Perez notes

"They didn't want too much." Residents wanted the area to be a neighborhood park and were concerned that providing too much parking would take away from that charm. Mildred Lane SE will have room for 10 parking spaces.

This concern with charm and with limiting parking suggests the neighborhood might be interested in becoming more walkable.

A sign of its transitional development is the abrupt end to bike lanes and sidewalks. 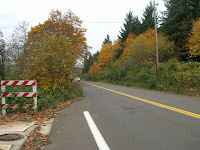 Here is the bike lane and sidewalk on Lone Oak, just north of Mildred. It just ends! 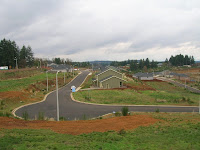 Lone Oak was a narrower, more rural road, but as part of the Southern Heights development, the road was widened to current standards, which includes bike lanes and sidewalks.

Mildred is even more baffling. 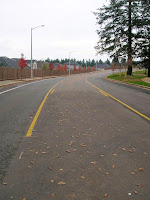 Mildred has a three-lane cross section its whole length, but there's hardly any place to turn! The center turn lane is superfluous. In this view the park is on the right and the fenced development to the north on the left. 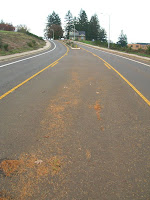 Here is just a bit down the hill. 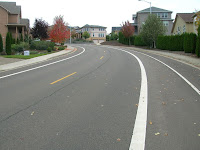 Just around the corner, and part of the Creekside golf course development, Lone Oak has a two lane cross section with bike lanes and a parking strip. No turn pockets, even though the many driveways make for lots of left- and right-turn possibilities!

Apparently the City is "thinking ahead." Mildred is formally classified as a "minor arterial," and Lone Oak a "collector." Arterials are meant to handle more traffic and the prevailing standards call for a three-lane cross-section. 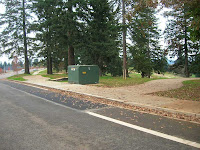 When Mildred first went in, however, there was a bike lane on only one side of the road - it didn't meet standard.

You can see a new patch of asphalt where the bike lane terminates. It appears that as part of the park development they may have widened the road slightly and will then stripe it with a bike lane.

Anyway, the roads here make no sense. This is a car-dependent, suburban bedroom development that is connected to nothing. No movies, no restaurants, no cleaners, no grocery stores, nothing. 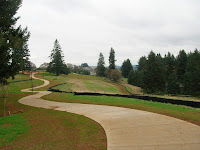 Fortunately, now there's a park. A gracefully serpentine path sits on a grassy shoulder and looks down over the small creek valley and the lightly forested hillside. Even with the exposed soil of the path bed newly seeded, some fencing, and scattered bits of construction debris, it is charming. 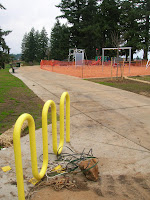 Unlike many parks there are bike racks in two places - nice to have from the very start! A wave rack is near the playground. 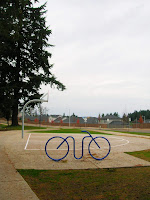 Not far away, by the basketball court, is an art rack in the form of a bike. This one is visible from the road and is a nice touch - though the parking strip may conceal it once cars come.

Though the neighborhood is clearly focused on car travel, Lone Oak Park is set up for walking and biking. This is encouraging. The area looks like a good candidate for the new Neighborhood Center Mixed Use zoning. At a crossroads it could use a coffee shop and a neighborhood grocery or deli. It needs a small commercial cluster to walk to - a neighborhood hearth and gathering place. A there there.
Posted by Salem Breakfast on Bikes at 12:15 PM