The Election: The Road Construction Lobby Paves History in Addition to Roads

National politics is not the Breakfast on Bikes forte - hopefully others will chime in with thoughts - but clearly the election promises change. 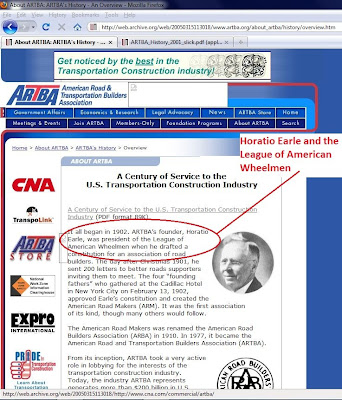 Thanks to the waybackmachine, we can visit an old, and now revised, history of the road construction lobby. The American Road and Transportation Builders Association, ARTBA, used to highlight the role of the League of American Wheelmen in their origins. Horatio Earle had been president, "Chief Consul," of the League and wanted to shift emphasis from racing to road improvement.

Some time in the later aughts, ARTBA updated the website and removed reference to the League. They erased the role of bikes.

Established in 1902 at the Cadillac Hotel in New York City, ARTBA is the oldest and most respected national transportation construction-related association. ARTBA founder Horatio Earle, a Michigan public official, was the first to articulate the need for a federally-built network of Interstate highways. Earle called it the "Capital Connecting Government Highway System," which he said, would "connect every state capital with each other and the Nation's Capital-Washington, D.C." [bold added]

In anticipation of the election results, ARTBA published a "grassroots" advocacy pamphlet. Among other things, the pamphlet calls for road construction firms to ask legislators to oppose efforts on climate change legislation:

Vigorously oppose the Kerry-Lieberman energy/climate bill approach that would impose new fees on motor fuel at the refinery level for non-transportation investments like rebates to utility users for higher utility bills.

With the election, the House's effort to reauthorize the Federal Transportation funding bill (SAFETEA-LU, or whatever other Byzantine nomenclature they concoct!) will now look much different, and ARTBA obviously aims to have a major say.

BikePortland has a long note about the loss of Minnesota Congressman Oberstar, Chair of the House Transportation and Infrastructure Committee. Oregon Congressman DeFazio will also lose his chairmanship of the Subcommittee on Highways and Transit.

Getting funding for bicycle, walking, transit, rail, and most things other than road expansion are likely to become much more difficult.
Posted by Salem Breakfast on Bikes at 12:15 PM

BikePortland has some thoughts on Kitzhaber here, and thoughts from national bike advocates here.