In the late 1890s, bicycles were advanced ground transportation technology, and the Army wanted to see how they could replace horses and improve mobility.

The Army formed a group of volunteers from the 25th Infantry, one of four African American regiments active from just after the Civil War through World War II. 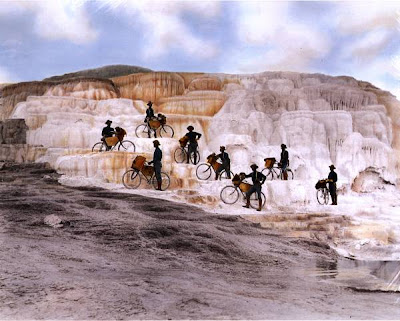 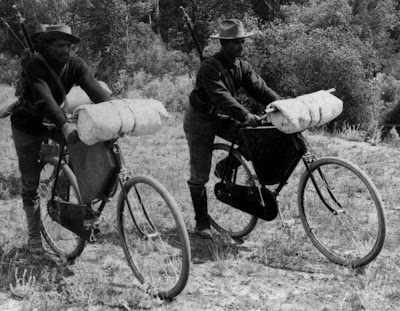 (Detail from Army History Journal [exact credit unavailable - click through for enlarged picture], but presumably from the University of Montana, Mansfield Library - see different print of same image here.)
Mike Higgins has blogged each day of the 1897 trip to St. Louis and has links to accounts of the other trips.

The next year, the Spanish-American war intervened and by the early 1900s, it was clear the automobile offered even more for troop movements and mobile gunnery.

Though it didn't last long, the Bicycle Corps is a fascinating episode of history in so many ways: Westward expansion, African-Americans and race relations, the technology of warfare.
Posted by Salem Breakfast on Bikes at 7:00 AM

Email ThisBlogThis!Share to TwitterShare to FacebookShare to Pinterest
Labels: Other Bike Fun, Veterans