Friday's B on B: Elegy for a House 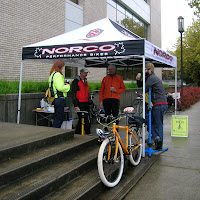 Cory brought the pop-up and heavy rain held off on Friday! We had a nice turn out on a misty morning. This is just before packing up, when the light was finally good enough for a shot.

One of the interesting things we saw was the crowd finishing up the demolition of a house directly across the street. Dump trucks were bringing fill dirt and a crew appeared to be distributing it. 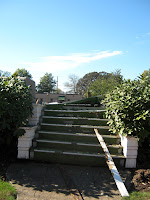 Last month, earlier in the demolition process, the basement was full of sticks and shards of lumber, but the stairs remained.

Unlike some demolition projects around the city, this house was not obviously in bad shape.

Google Streetview shows it clean and kept up. It was a charming reminder of the old neighborhood before the Capitol Mall expansion.

The woman who lived there used to sell a small amount of produce from her porch. She had a basket for payment on the honor system.

It is sad that the house could not be moved and reused, and that it was more convenient and presumably less expensive to demolish it. Elsewhere in the city, cheaper, modern construction will replace it in the pool of housing stock. That house will likely have fewer transportation options and be farther from grocery stores, commercial districts, and employment centers.
Posted by Salem Breakfast on Bikes at 12:15 PM

We were talking about that house on Twitter a few weeks ago, wondering what in the world had happened. Someone had heard a rumor about insects.
And then last week I spotted a ranch style house on the southwest corner of Kuebler and Lone Oak, being prepped to move.
I guess that's a good thing.

It would be reassuring if something was indeed "wrong" with the house and it wasn't just a waste of a good house!