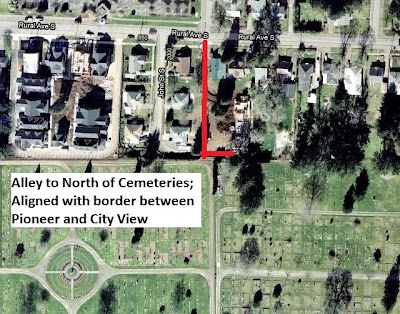 Top of mind for people who bike is a request for vacation of right-of-way just north of the Pioneer and City View Cemeteries.

City Staff asks Council to postpone consideration of a small segment of alleyway so that it can be evaluated for a connection through the cemeteries as part of the update to the bike plan.

This is great to see!

At the same time, the history of the alley is fascinating. In 1985 a pathway had been considered, and a city staff report mentions that there was a

possibility that it [the relevant portion of the alley] might be incorporated into the proposed Cemetery Bikeway which would provide bicycle/pedestrian access through the cemetery between Rural and Hoyt Streets.

The project soon became dormant, and after 20 years, in 2004 some proposed a pathway. Apparently it was decisively rejected!

It's good the City is willing to revisit the concept, and it will be interesting to learn more about the reasons for the rejection in 2004/05 and how the climate might have changed in the mean time.

A path through the cemetery could benefit not just the Fairmount neighborhood, but also those in the Candelaria, Salem Heights, and Sunnyslope neighborhoods who might wish to use a low-traffic route that avoids Commercial and Liberty streets. 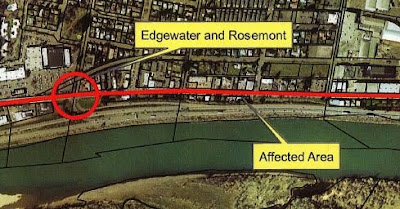 Public works would like to fund a road widening project at Rosemont and Edgewater through Transportation System Development charges. It's too bad that the increased mobility on this street can't be met by improved bike, ped, and transit rather than increased auto capacity. Pumping more cars through it could diminish the effectiveness of the new sharrows.

The proposed publically-funded project would widen Edgewater Street NW on both sides of Rosemont Street NW intersection to provide left-turn lanes. Widening would occur primarily on the south side of Edgewater to minimize impacts to business properties. Rosemont Avenue NW would be widened at the intersection to provide a southbound left-turn lane. The project would replace the existing signal with a new traffic signal and would provide signal interconnect from Wallace Road NW, along Edgewater Street NW, to the intersection with Eola Drive NW. The project is proposed to be funded entirely through TSDCs over three fiscal years, with design and right-of-way acquisition beginning in FY 2011-12, continued right-of-way acquisition and construction in FY 2012-13, and final construction and installation of the signal interconnect occurring in FY 2013-14. Total cost of the project is estimated to be $1,300,000.

The report on greenhouse gas reduction is telling:

The Council Legislative Committee has identified that a degree of uncertainty remains as to whether the targets recommended by OLCO can be realistically achieved....[planning efforts] will depend in large part on the state providing additional and sufficient funding and support for both scenario planning and engaging the public on the costs and benefits of reducing greenhouse gases.

Salem Electric intends to donate $10,000 towards one or more electric car charging stations.

The noise ordinance will be considered.

The legislative committee report's always good to read, but there's nothing in it directly on transportation.
Posted by Salem Breakfast on Bikes at 12:01 PM

Council voted to proceed with rather than postpone the alley vacation. So there will be a formal hearing. Using the alley is not the only way to connect to path through the cemetery, so it doesn't necessarily kill the path concept. Will have more later.