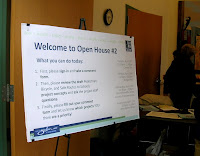 This past week the Bike and Walk Salem project held four open houses to present the draft proposals for biking, walking, and safe routes to schools.

The one at the West Salem Library was crowded at times, and folks attending included West Salem City Councilor Dan Clem (here talking to Bob Cortright in yellow). 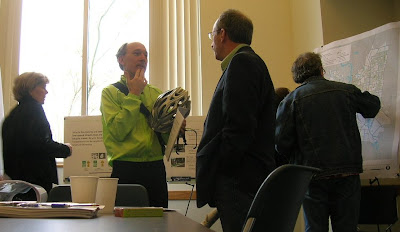 The map for West Salem naturally was of interest to many people, and conversation focused on not merely what was desirable, but also on what was feasible in the near-term.

Creating an effective crossing on Wallace is something of a keystone. Glen Creek, the railroad right-of-way, and Edgewater all are important and logical crossing points. All are problematic.

One potential crossing that may not have received enough attention is Taggart.

Taggart has a light, and at least on a map, offers open space and much easier connections than an over- or undercrossing at the railroad. Purchasing easements or right-of-way would likely be much cheaper as well.

Since Wallace is a State highway and the intersection with Glen Creek is going to be dramatically widened in the next couple of years, a pragmatic near(er)-term solution might be to focus on Taggart and connections immediately on the east and west of Wallace along Taggart.

Do West Salem readers have additional thoughts?
Posted by Salem Breakfast on Bikes at 7:00 AM

Taggart would work. City would need to create a buffer at Taggart and Wallace to reduce right hooks. Maybe our first bike box! It's a dangerous right turn toward Les Schwab..not ideal. Lots of cars in and out of fast food alley. I still think a ped/bike bridge attached to HWY 22 bridge at Edgewater would be the best option. I am thinking the bridge would be used for ped/bike stroller folks that are walking from all the great bike friendly shops on Edgewater to Wallace Marine Park. Bike commuters would use Glenn Creek.

A Taggart crossing is the only option for me when I am trying to get myself over further to Walker and up the hill. I can tell you the current situation is better then nothing but it's wild with folks making right turns while I'm going along on the sidewalk. The other side of Taggart is also interesting... Can't say it's my favorite part of the commute so far. I am for a ped / bike bridge attached to HWY 22, too. As a novice commuter, I am not comfortable mixing it up with cars unless they're going twenty-five miles an hour or I'm in a cycle track or wide bike lane.

I like the idea of bike boxes at Taggart!

It would be interesting to see concept drawings for the overpass - cantilevered, I suppose, out from the existing HWY 22 structure? The "official" plan for a third bridge would probably wipe it out, though. (See the slide on p.38 here - it's not included in this set.)

The trouble is, while an overpass would likely be the most attractive option and, as you say Melinda, the best for attracting family bicyclists, it would also be the most expensive. So it seems like some kind of nearer-term and less expensive solution would be helpful. If it would cost $5M, could you spend $500K on Taggart and $4.5M elsewhere in the city?

Not sure there's a high-quality solution...but maybe a "good-enough" one?

Bike boxes and other systems to increase bicycle / pedestrian visibility would be the ticket if the price tag is too high for the bicycle / pedestrian bridge. (Something is better than nothing.) The parking lot entrance to Les Schwab, before you even get to Taggart, is most concerning to me. Folks on Wallace turning into this parking lot area in the morning are typically taking that right turn fairly quickly. (I don’t know how that can be remedied.) As for the rest of the improvement plans, I would love to see bike boulevards, especially in the downtown area so folks could move more easily around town and on to work / running errands. (I do love the Sharrows on Chemeketa; although sometimes I do get confused looks when I take the lane on that road. I wonder how many drivers really understand what those mean in Salem?) The cycle track along Mission would also be fantastic but that’s coming from a novice who likes calm waters and who will go out of her way to avoid mixing it up with fast moving traffic.