When Gabe Klein came to town, he marveled at Salem's broad right-of-ways and the inefficient ways we used them.* 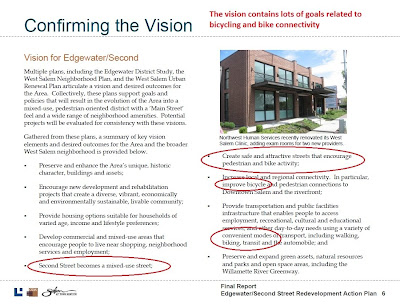 The Edgewater/Second Street Action Plan calls for improved conditions for people on foot and on bike, but you wouldn't know it by the plan the Board approved for Second Street. 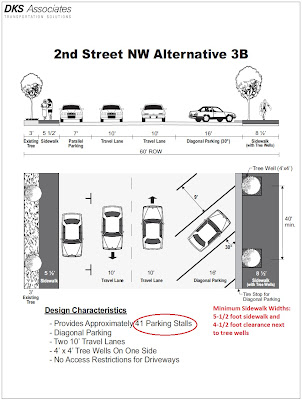 The Board recommended skinny sidewalks and maximum car parking for a section of Second Street NW between Rosemont and Gerth (below, cross-hatched in green). The new road space comes from taking out the railroad right-of-way, currently a gravel patch in the middle of the roadway.

The matter will go before the full Urban Renewal Agency on Monday night.

The Staff Report (8mb pdf) also contains an option supported by a minority on the board. It has larger sidewalks and uses only parallel parking.

But the fact remains that the new right-of-way created by paving over the railbed will be devoted to private car storage rather than to improved facilities, connectivity, and amenities for the public on foot and on bike.

It's hard to know what to say when the language in the Action Plan is so clear and the details in this road design so disconnected from the plain meaning of the Plan. It does underscore the importance of political support - the walking public's not calling loudly enough for wider sidwalks.

In any case, without the railroad connection between Patterson and Wallace, and across Wallace, Second Street is not a key bike connection, and the road could be restriped at some later time. More crucial is comfort and the east-west connectivity along Edgewater (retrofit ideas here).

On the 11th, Councilor Cannon pulled the alley vacation by the cemetery off the consent calendar and Council voted unanimously against staff recommendation. Meeting minutes here, and video here [choose April 11, 2011 --> agenda 4.3(d)]. There will be a full public hearing on the vacation later in the year. A connection to the alley is not the only way a path might go through the cemetery, so the loss of this alignment would not be a total show-stopper. Still, it was disappointing to see Council so quickly override the staff recommendation.

A hearing for adoption of the Capital Improvement Program (summary). Here's a longer discussion.

It was nice to see that a planning variance will require new Bike Parking at a clinic on 1810 East Nob Hill.

The City is moving forward with other plans for space in the Liberty Parkade instead of a Go Downtown Welcome Center (for history see here and here).

* Earlier this week new Chicago Mayor Rahm Emanuel announced that Klein would become his Director of Transportation.
Posted by Salem Breakfast on Bikes at 11:00 AM

This is really disappointing. Who should we contact from the Urban Renewal Committee? My email to my Councilman did not seem to help. Can you help me find the public document that states how each member voted? I assume it's in the minutes? I share the same concern about voice. I know many people that are concerned about this issue but probably never voiced their concern. Democracy only works when we speak up!

I understand Council voted 5-3 for the skinny sidewalks and diagonal parking. (Will need to confirm, however.)

Will probably have a follow-up at some point...