Baseball couldn't be any more thrilling just now. The same can't be said of the City.

Rather than swinging for a home run, the City seems intent on bunting for an infield hit. You want to say, "Go big or go home!"

Earlier this week the Flex Fund proposals generated some good discussion and critique.

Alas, none of them hit a transportation tri-modal trifecta. Instead of projects responding to the lure and requirements of this particular funding source, they look like projects bending and twisting in search of funding, awkwardly shoehorned into the grant criteria.

The purpose of the Flex Fund program, a State administered program of Federal road funding, is

to support sustainable non-highway transportation projects...that positively impact modal connectivity, the environment, mobility and access, livability, energy use and the overall operation of the transportation system.

The accent is clearly on transportation. But both of the City proposals are located in parks. A parks project that served transportation needs could be an excellent separated facility for people who walk and bike, but to say the City's two projects are for transportation is a stretch. 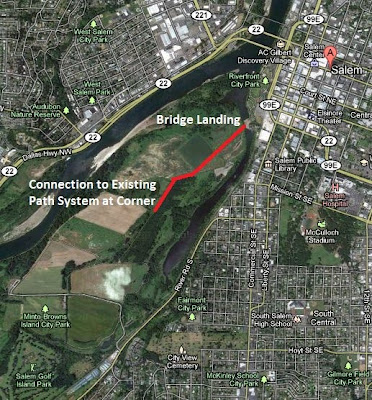 The marquee project application is surely the path to Minto Park on the Minto side of the bridge across the slough. People seem generally lukewarm at best to this project as a year-round transportation corridor. As a recreation trail, it's great, but as the map shows, it is not likely to generate significant numbers of new biking and walking trips for errands or work, especially during the winter when it will dark during the commute. For some it will be more attractive than the path along River Road, and they will shift trips to the new facility, but it's hard to see how the path and bridge will be a generator of new trips. This is a Parks project, not a Transportation project.

More information is out on the path between Glen Creek Road and the Union St RR Bridge in Wallace Marine Park:

Design of this project is complete; however, costs associated with both design and construction are exceeding original estimates. The additional costs arise from unanticipated archeological and environmental testing requirements and the cost for pedestrian scale lighting to match the existing lighting on the Union Street Railroad Bridge path system. The amount needed to complete construction is approximately $97,000. Enhancements to the project design (benches, park/trail way-finding signage, landscaping, trash receptacles, etc.) could be included in the project for an additional amount of approximately $47,000. If grant funds are not received, the City will need to identify another source of funding to complete construction of this project (approximately $97,000)....

Adding amenities to the project design, such as benches, park/trail way-finding signage, landscaping, trash receptacles, etc., will enhance the user experience of the completed project. These elements may also make the grant application more competitive.

It is important to remember that the transportation problem here is access across Wallace Road, not connections within the park.

Nevertheless, the Glen Creek trail is a shortcut inside the park - considered as a transportation project it's a solution in search of a problem. And do we really need benches and way-finding there? These seem like superfluous elements added as sweetener to the proposal. Here too, it's really a parks project, and not a transportation project. 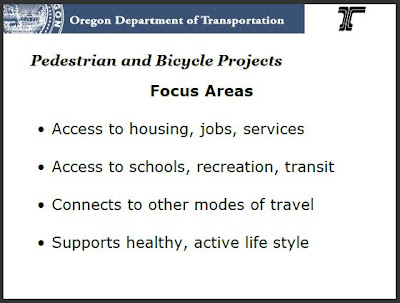 Both the Glen Creek and Minto trails are weak on access to housing, jobs, services; weak on access to schools and transit; and weak on connecting to other modes of travel. They do provide access to recreation and help promote an active lifestyle, but this just underscores their weakness as transportation projects. (Slide from September 8th presentation on the Flex Fund program.)

Finally, the agenda has new information on a Cherriots application for Flex funds. It appears to have three pieces:

The Salem Area Mass Transit District is committed to correcting the construction deficiencies in the downtown transit mall. The District considers public transportation essential to the vitality and livability of our community. Transit brings jobs, employers and employees together, which benefits the economy. Repairs to the transit mall would greatly enhance our downtown environment.

The Salem Area Mass Transit District is proceeding with a site selection for the South Salem Transit Center. The transit center is the second in a series of strategically located transit centers planned by the District. It will provide convenient connections to routes throughout South Salem with transfers to the rest of the service area.

Interestingly, this doesn't appear all that multi-modal, either. It would be nice to have bicycle parking and other facilities included in the bus stop project as a way to encourage bike use for trip end connections.

Withdrawing a Mixed Use Zone 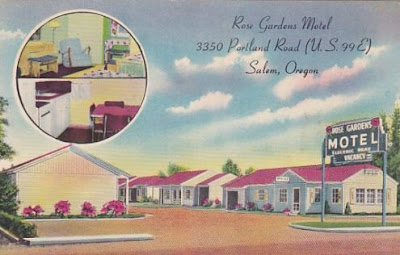 You may recall the old Rose Garden site on Portland Road. The motel was leveled and it's now an empty field and focus site for redevelopment. Councilor Dickey proposes to take it out of a special mixed-use overlay zone.

After considering the property is not located on an intersection; its lack of development over the past ten years; and recognizing Important community elements In the Portland/Fairgrounds Overlay Zone would still be in place; the NGRAB [North Gateway Redevelopment Advisory Board] made a motion to recommend the requirements of the Rose Garden Mixed-Use Area be removed from this property.

In light of the difficulties still in fully realizing the North Downtown/Broadway district as a neighborhood full of mixed uses, perhaps it does make sense to loosen requirements on this more problematic site.
Posted by Salem Breakfast on Bikes at 7:00 PM

Excellent analysis, Eric. Is it too late to get the application process on track with a real transportation project this grant cycle?

Can WE submit an application ourselves? We have some sense of what we want to do (from our Bike Walk Salem plan) and the costs assoicated (from Alta Planning). Seriously, we should consider submitting a 'community-driven' proposal.

Ichiro once said of a competitor, "I hope he arouses the fire that's dormant in the innermost recesses of my soul...I plan to face him with the zeal of a challenger."

That's a really interesting idea, Jen. I think working on a citizen/community grant application could help rouse the City's dormant fire and zeal!

It could also be good to learn more about the challenges on the staff side of assembling an application. Sometimes it seems like it all should be so simple, but of course the bureaucracy - Federal, State, and local - imposes complications and conditions. By doing an app more of us would better understand the process.

It might also be a story the press would find interesting.

As for this round, The Flex Fund apps close on the 20th, and I think it would take too much time and effort to do one well now. Unfortunately we're up against the deadline, and I am not optimistic the City will be able to get off a substantial revision or new app. I wish the City had the projects queued up in August/Sept or earlier so we would have more lead time for substantive debate and modification.

But the Transportation Enhancement program closes next May....

Maybe we do one for that?

And...Cherriots? Do you know anything more about the Cherriots app, Jen?