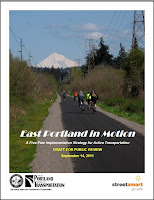 Though sometimes we look to Portland for examples in bike infrastructure and bike culture, in a lot of ways Portland's not a very good example. The central city retains the streetcar grid but during the streetcar era, Portland was always about 10x larger than Salem, so Salem's grid is very much smaller. And then there are also the demographics and economy.

East Portland, to the East of I-205 corresponds much more closely to Salem, and a look at the just-released East Portland in Motion five-year plan for active transportation might be helpful for those of us interested in Bike and Walk Salem. 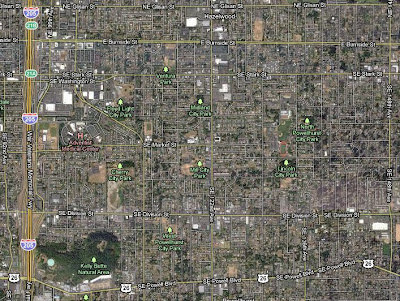 As you can see, in east Portland the grid breaks down; more disconnected and curving kinds of street plans appear. Strip malls and development along busy arterials suggest the mid-century growth of much of these neighborhoods. Many of the neighborhoods started as unincorporated county land, and lack sidewalks and other streetscape elements. 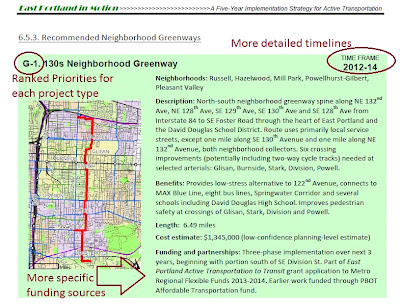 But they've also managed to do some of what we'd like to see in the Biking and walking chapters of the new TSP - and don't yet see. Here are ranked priorities for projects; timelines more specific than 1-10, 10-20, and 20+ project horizons; and funding strategies.

So why can't we do it here?

(The cover image shows what I think is the Springwater trail. It extends through east Portland [pdf map] and out to Gresham and Boring. I couldn't easily find the funding source for the original acquisition around 1990, or the early construction circa 1996. Some later rounds have been funded by the Transportation Enhancement program.

If the trails through Forest Park are used for recreation almost exclusively, and the proposed Sullivan's Gulch corridor is envisioned with commuting top of mind, the Springwater functions as both: Closer in southeast, it works well as a commute corridor and farther out, like in the picture, it works mostly as a recreation trail. It would be interesting to know more about how it was pitched during the early funding phases.)
Posted by Salem Breakfast on Bikes at 7:00 AM