The Minto Path Flex Fund application roused a good bit of debate and conversation. Since the question at the center of it was the extent to which it would function as a transportation corridor, a comparison might be useful.

Yesterday Portland's Flex Fund applications came out. One of them is also a segment of multi-use path.

The Sullivan's Gulch corridor follows a rail right-of-way and the Banfield highway. It connects east Portland to Hollywood, to the Lloyd District and downtown. It's a separated facility that clearly connects homes to jobs and business, and is obviously a transportation project, something that makes it easier to make trips by bike instead of car.* 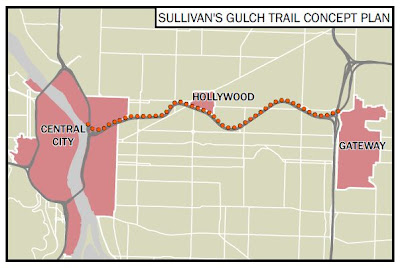 BikePortland lists the other applications, each of which links homes to jobs and business, and many of which have a multi-modal component.

They include:* Here again is a map of Salem's separated path system. 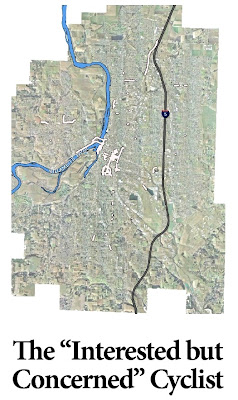 The limits of its connectivity should be obvious.

There's not structural (or visionary!) thinking about where people live and where people work and how to connect them easily by bike. Instead, we shoe-horn the bike facilities into the left-overs, odd and little used spaces.

(If you come across news items about other apps, drop them in the comments. It might be interesting to look at more of them in advance of the review committee's winnowing.)
Posted by Salem Breakfast on Bikes at 12:01 PM