Property Along RR in West Salem to Change Hands

Oregon Fruit Products, an important cannery in West Salem along the Salem, Falls City, and Western railroad, which connects to the Union Street Railroad Bridge, has been sold. 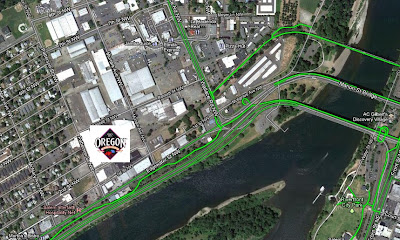 According to the press release from last weekend,

After more than 76 years of local family ownership Oregon Fruit Products has announced that the company will transition to new ownership, according to the company’s president, Joe Peterson.

The new owners are a family run investment company lead by Ed Maletis, best known for their ownership position in Columbia Distributing, the largest beverage distributor in the Pacific Northwest.

Coincidentally, both Oregon Fruit Products and Columbia Distributing were founded in 1935 and third generation family members Paul Gehlar and Ed Maletis represent the current ownership of each company, respectively.

Paul Gehlar said in selling Oregon Fruit Products that it has been important to value the contributions of the employees and growers while creating new opportunities for the company and its partners. The goal has been for the business to remain in the heart of Oregon’s fruit growing region as well as to secure the best possible position for current employees and local farm producers.

With change comes opportunity. Opportunities also sometimes close. It will be interesting to learn more about the prospects for connectivity here for people who walk and bike.
Posted by Salem Breakfast on Bikes at 7:00 AM