The City's announcement for the "continued" Public Hearing on the alley fragment* by the cemetery is out (though not yet to the web). Maybe the thing that's the hardest about it, is that should be a no-brainer. The vacation criteria are so easily answered - there is no compelling public need, only a private wish - that to answer otherwise is to wander (and wonder) with Alice:

Humpty Dumpty smiled contemptuously. 'Of course you don't — till I tell you. I meant "there's a nice knock-down argument for you!"'

'When I use a word,' Humpty Dumpty said, in rather a scornful tone, 'it means just what I choose it to mean — neither more nor less.'

'The question is,' said Alice, 'whether you can make words mean so many different things.'

'The question is,' said Humpty Dumpty, 'which is to be master — that's all.'

Fortunately, the hearing will be pretty limited and narrow, and at least formally it should not get side-tracked by questions about Pioneer Cemetery and its capacity for an increment of walking and biking traffic.

The alley is not in Pioneer Cemetery, and there is no formal plan for a path in Pioneer Cemetery.  The alley is also a dinky east-west fragment*, not by itself continuous with anything.  If Council says "no" to the vacation, as it should, no path will suddenly spring into existence.  The alley fragment is an island, and requires a bunch more stuff to happen before it forms a path connection.

(It is easy to get distracted by side issues!  The alley and whether a connection might pass through the cemetery is an important question, but the path alignment is a question separate from the matter of vacating the alley, not to be decided at this time.)

Here are the relevant criteria, the only substantive matters on which Council will deliberate:


b. Does the proposed vacation restrict the City’s compliance with the State Transportation Planning Rule (TPR) and the Salem Transportation System Plan’s policies on transportation system connectivity? A proposed vacation should not limit, nor make more difficult, safe and convenient pedestrian and bicycle access to community activity centers such as schools, parks, shopping, and transit stops. Additionally, local street connectivity, traffic circulation, emergency vehicle access, and accessibility to transit service should be maintained within and between neighborhoods.

d. Is the right-of-way proposed for vacation part of or near a planned transportation improvement? Rights-of-way that have the potential to be used for a future transportation project should not be vacated.

e. Does the vacation of the right-of-way satisfy a compelling public need? Issues that address health and safety concerns may outweigh the transportation criteria listed above and should be given proper consideration.

And here's the nut: A connection between Hoyt and Rural might need the alley. Therefore, until a connection is fully planned, the alley should not be vacated. And that's what was in the original staff report over a year ago:

It is possible, of course, that the final alignment for a connection would not need the alley. At that point, the alley can be vacated. But until then, vacating the alley is premature.That's all Council is asked to find.

But if you want more detail...

First, criterion b: Residents of the Fairmount neighborhood currently can only reach LifeSource, the French Press, Venti's, and other shopping by walking or biking on south Commercial. A connection between Hoyt and Rural would create a low-traffic alternative - one that is less difficult and more safe and convenient for many. 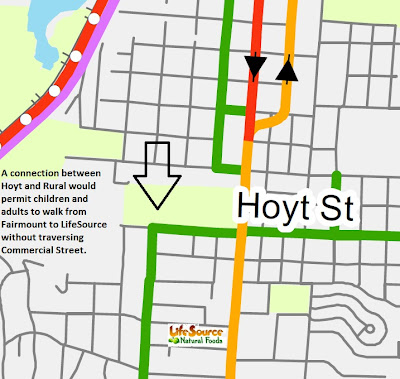 Equally, residents in the Candelaria neighborhood cannot reach the Library and downtown destinations without walking or biking on Commercial. A connection bewteen Hoyt and Rural would create a low-traffic alternative.

Noting that neighbors would like more transportation choices here, the adjacent neighborhood associations have both been in support of a connection between Hoyt and Rural in this area.  Sunnyslope has formally opposed the vacation, and SCAN supports delay until an alignment is chosen.  (SCAN also meets tonight at 6:30pm.)

Vacating this alley would eliminate a part of one potential alignment and would "limit" and "make more difficult" planning for a "safe and convenient pedestrian and bicycle" connection between Hoyt and Rural.  It would hamper low-stress connections to "community activity centers such as schools, parks, shopping."   It should not be vacated.

Criterion d.  Since at least the 1980s, transportation plans have contained proposed and planned connections bewteen Hoyt and Rural.

The current Bike and Walk Salem plan also contains a connection at a conceptual level of detail. A connection is not planned in sufficient detail to specify an alignment.  Nevertheless, the alley "right-of-way [has] the potential to be used for a future transportation project" and should not be vacated.  To meet this criterion, all that's necessary is potential, and it is met!

Criterion e. The only reason to vacate the alley is to accommodate a private development.  One of the developers said in January, "We could lose significant open space.  Our community at Pioneer Alley would be bisected with a 14-foot wide access way [actually a different alley, one running north-south, not the east-west one involved here], wasting our common area and imposing public access within 3 feet of windows of one home.  The garage of our relatively newly constructed home...could be rendered inacessable.  [another home] might have to be moved."

It's hard not to conclude the development has already appropriated the "common area" and may even be "squatting" on public property!  The developer knows there are public alleys there, and it's not at all clear why they deployed houses as if the alleys weren't there.  Vacating the alley serves a private desire, but not a "compelling public need."

The public need is to retain flexibility and options in formally planning an alignment for a connection between Hoyt and Rural.  Until the connection is planned, and we know we either need or don't need the alley, this alley should not be vacated. All we are talking about is retaining it as an option.  Nothing is being formally planned.

Appendix on the Remnant, Fragmentary Nature of the Alley

* One thing that is important to note is that by itself, the remnant alley is not sufficient. The segment in the red box below has apparently already been vacated, or was never public to begin with.  (In the map at very top, compare the alley to John Street - it doesn't connect just now.)  This is one reason why I have argued that a connection through City View should be considered - and, if the map is accurate, seems to have been the preferred concept in 1988 as well. 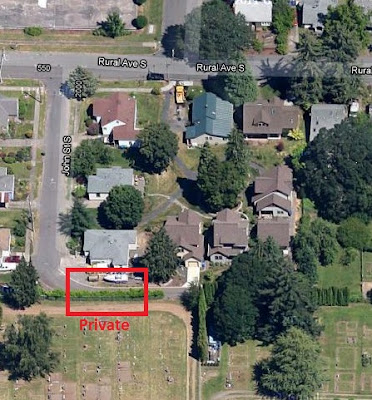 For the complete series of posts - and lots of other maps and historical trivia - on the cemetery and alley, see here.

1) Do not vacate the remnant alley under question.

2) Arrange a swap: Give up the central north-south alley (blue) that is giving the Pioneer Alley development anxiety about encroachment, and in exchange acquire an easement across the privately held driveway. (Pioneer Alley apparently feels they would need to build a new driveway, in yellow, but I don't see why everybody couldn't share the blue east-west segment - cars and people on foot can share that space.) 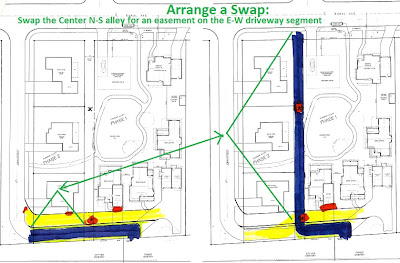 Such a plan preserves maximum flexibility for a connection through either Pioneer Cemetery or through City View - matters that would require additional negotiation and planning. (Map with yellow and blue from Pioneer Alley testimony in January; my comments in green.)
Posted by Salem Breakfast on Bikes at 7:00 AM