Today City Staff sent out the unsurprising news (presumably because of budget cuts) that they will no longer be providing staff support for the Vision 2020 project.

As far as I knew, the Bicycle and Pedestrian workgroup was the only part of the project still meeting regularly. Other groups may have met intermittently, but most groups had disbanded within months or a year or two after the release of final vision document, the action plan.

In the past year the bike/ped group had definitely lost energy and momentum, and there may be more to say on the critical side of the ledger.

But Vision 2020 was an ingredient in the final decision for sharrows on Chemeketa, Commercial, and in west Salem. A different Vision 2020 workgroup was behind the colorful new signage downtown.

While it's hard to say it really accomplished anything truly visionary, it did do some nice things. So, Cheers! 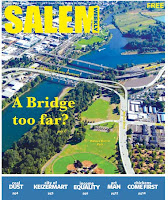 Salem Weekly's cover story this issue is a look at the River Crossing project.

Check it out - and perhaps more importantly, give it to your friends and colleagues for whom perhaps the bridge materials are new.

Measured by dollars, it deserves at least 10 times the scrutiny.
Posted by Salem Breakfast on Bikes at 12:01 PM