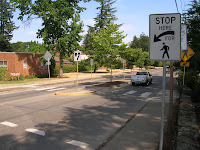 Great news! The City's gonna do a crosswalk education and enforcement action. From the blurb:


As the weather becomes warmer and days become longer, we typically see more pedestrians out and about at various times of the day and night, and pedestrian safety issues become even more important. As a result, the Salem Police Department traffic unit will be conducting pedestrian safety enforcement and education campaigns throughout the City on Wednesday, June 27.

The campaigns will utilize plain clothes officers who will be crossing streets at crosswalk locations throughout the City, and video cameras will be used to record violations. Those who are contacted will be able to view the violation on video.

Marked crosswalks may be located at or between intersections and are recognized by solid or dashed white lines. Oregon Law also states that every intersection should be considered to have a crosswalk, whether marked or not. Additionally, a vehicle may not legally pass another vehicle that is stopped at a marked or unmarked crosswalk for a pedestrian. Failing to yield to a pedestrian in a crosswalk and for passing a stopped vehicle at a crosswalk are class B violations and carry a fine of up to $260.00.

This will be one of several campaigns to be conducted by the Salem Police Department Traffic Control Unit to address pedestrian and crosswalk safety through education and enforcement.

I love the video component!

Remember, too: When you are on a bike, you must yield also to people on foot in marked and unmarked crosswalks! 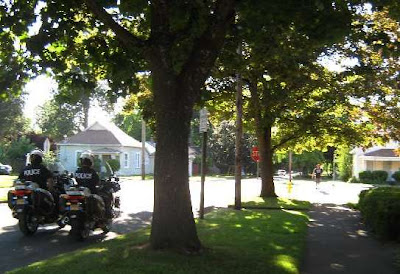 Here they are! Saw them in at least two marked crosswalks on 17th - including Chemeketa and 17th, where a motorist struck a blind person walking in the marked crosswalk.
Posted by Salem Breakfast on Bikes at 6:00 PM