Bridge Congestion Measures and Chamber in the News 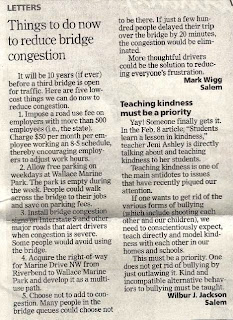 Mark Wigg has a letter to the editor in the paper today with suggestions for immediate traffic demand measures:


1) Impose a road use fee on employers with more than 500 employees, (i.e. the state). Charge $50 per month for every employee that works an 8-5 schedule thereby encouraging large employers to adjust work hours.

2) Allow free parking weekdays at Wallace Marine Park. The park is currently empty during the week. People could walk across the bridge to their jobs and save on parking fees.

3) Install bridge congestion signs on Interstate 5 and other major roads that alert drivers when congestion is severe. Some people would avoid using the bridge.

4) Acquire the right-of-way for Marine Drive NW from Riverbend to Wallace Marine Park and develop it as a multi-use path.

5) Choose not to add to congestion. Many people in the bridge queues could choose not to be there. If just a few hundred people delayed their trip over the bridge by 20 minutes, the congestion would be eliminated. More thoughtful drivers could be the solution and they would reduce everyone’s frustration.

In so many ways the City should immediately begin implementing the measures - for people in cars, on buses, on foot, and on bike - outlined in the Alternate Modes Study. Relative to the cost of the bridge, the measures are very cheap indeed, and we might all find ourselves pleasantly surprised about how effective they all could be, exceeding the miserly baselines assumed by the outdated modeling.

The Oregonian also has a piece on construction debris, noise, and general unpleasantness at the Sellwood Bridge site.


From inches-thick drifts of pulverized concrete to decreased property values to chest-thumping, round-the-clock noise of cars and trucks thundering over a troublesome new bridge joint, Adkins and dozens of others living in the bridge's shadow find themselves, very literally, left in the dust.

"Someday, this is going to be a great new bridge," said Adkins, gazing at the sprawling construction site from his river's edge patio. "But for right now, for the next three years, it's going to be unbelievably awful."

The impact on neighbors is not necessarily by itself a reason not to undertake construction of a good and necessary project. Those projects just need better mitigation built into the schedule and into the budget.

But the deleterious impacts on neighbors should remind us not to undertake big projects lightly or to undertake unnecessary projects. We have to be sure we need and want them.

Also, in a move that may help to explain more of the Chamber of Commerce's activism for a big new bridge and highway, the Chamber announced the "First Citizen" for 2013.

And he would be Scott Casebeer, president of Capitol Auto Group.  The Auto Group recently moved to new quarters on the Parkway, and a big bridge could offer easy access to Polk County customers for new cars.

It would be interesting to know if the prospect of a bridge and highway extension factored into their plans when they decided to move from Mission Street to the Parkway.

In any case, so much of the Chamber's interest is for auto-oriented businesses, deployed on the edges of Salem (or as with the casinos, even far away from urban boundaries).

For the Chamber, the emphasis is not so much on Salem but on a very generously defined "Salem Area." And right now it is not arguing for things that will benefit the city of Salem.

Mark Wigg has some wonderful ideas. I especially like the one about free parking at Wallace Marine Park. That should be done tomorrow! We shouldn't underestimate the impact of doubling parking meter fees. Many, many state employees still drive solo to work and park at meters. This might change their behavior, finally. I would love to see many state employees who live in West Salem park at Wallace Marine and walk over the Union St. Bridge to work.