City Club Talks Streetcar - But are we Missing Simpler Solutions?

Streetcars are really difficult to assess. On Friday the Salem City Club will discuss them.

On the one hand, 100 years ago Salem enjoyed a pretty good public transportation system. Streetcar lines covered much of the city, and several railroad lines filled in the gaps.

More than this, no single transportation choice dominated minds or streets the way the drive-alone trip dominates today. Back then, horses, bicycles, streetcars, and a small number of autos filled the roads. If the past has a lesson, it is not the specific technologies behind the choices, but rather the robustness of possibility and diversity of choice. Streetcar was a critical part of that.

Here you can see the streetcar network in black circa 1920, at the peak of service. Lines went out south Commercial, 12th street, State street, Chemeketa and Center Street, 17th street, Summer street, and Fairgrounds road. The Southern Pacific; Oregon Electric; Geer; and Salem, Falls City and Western railroads are in blue. You'll recognize the line up High Street and Broadway and the tracks uncovered last summer.


Unfortunately in Salem, little is left of the network - or of the commercial buildings that used to line them.

There's magic in them streetcar neighborhoods!

But on the other hand, the modern return on investment may not be so great.

Unfortunately, while there has been Federal monies floating around for modern streetcars, and the prospect of more makes the idea for Salem especially attractive, these funds are for capital expenses only.

As we are seeing in Portland, as transportation budgets shrink, there's a problem for operating funds. One factor in Trimet's diminishing bus service is the operating expense for the streetcar and lightrail lines. Agencies are taking money from one thing to fund another.

It's also not clear how much they actually increase transportation services and mobility in net. The streetcars may just cannibalize resources. There have been many jokes in Portland about how it is faster to walk than to take the streetcar.  Light rail also stops too frequently, especially downtown.

People who bike have also found the streetcar tracks quite hazardous, and Portland Bureau of Transportation and the Streetcar have not done sufficient mitigation in most cases.

Out of the Third Bridge brainstorming, one idea that has been floated is for a streetcar.

On Friday the 22nd from 11:30 AM - 1:00 PM, at Mission Mill the Salem City Club will discuss "Streetcars and Such: Extending the Downtown Vision," the fourth and final installment in their series, "Looking Ahead: Grassroots Ideas for Downtown Vitality, Transit and the Future of Salem."

The program and speakers:


The streetcar proposal is intended to be a broad-based preliminary idea for public consideration, and will be presented by three City Club members: Allan Pollock, Bob Krebs, and Russ Beaton. Allan is, of course, the executive director of Salem Keizer Transit (Cherriots), and Bob serves on the Board of that organization. He is retired from ODOT, where he served as the head of rail-based planning for Oregon. Russ is an economist emeritus from Willamette University, where he long taught urban land economics and was involved in many local and regional economic and land use issues.

As mentioned before, the concept is just at the brainstorming stage, so perhaps it is premature to comment on it. Nevertheless, it seems to me to share some of the same problems that the big highway and bridge has: Relatively speaking, it may be overkill, too complicated and too ambitious and too costly of a solution.

It could also dampen other modes of travel.

Two of the key streets, Chemeketa and Union, bicycle advocates hope will become family friendly bikeways. Putting down streetcar tracks, as we have seen in Portland, creates problems. I fear the rail lanes here would cannibalize rather than complement bike lanes, especially on Union and Chemeketa. 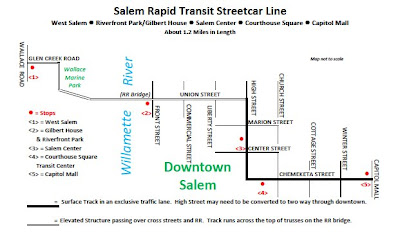 Double-decking the Union Street RR Bridge would also put a lid on the bridge, and even in the rain, one of the things I like about it is its openness. I'm not real excited by the prospect of a roof there.

Finally, is Salem really dense enough for streetcar right now?  It seems to me that what made the streetcar work circa 1900 was that we hadn't yet gutted downtown with parking lots and single-use office buildings. I suspect we need more redevelopment downtown first.

In any case shouldn't as a rule we prefer simple solutions to complicated ones? Biking, walking, busing and staggered start times are easier and less costly to implement at the moment.  And in the absence of compelling argument these should be preferred to more difficult and more costly solutions like streetcar.

At the same time, we should be brainstorming vigorously, throwing lots of ideas against the wall to see what sticks and holds up.  Maybe there's a streetcar configuration that does make sense.  Streetcar certainly seems to spur more transit-oriented development than bus lines or bike boulevards - though the results aren't always as clear-cut and robust as some proponents have argued.

If you're interested, check out the City Club talk!
Posted by Salem Breakfast on Bikes at 7:00 AM

Interesting note in the Oregonian about the Portland Streetcar failing to meet revenue targets:

"Initially, the Portland Bureau of Transportation had projected the streetcar fares would bring in about $1 million annually -- or 11 percent of the $8.9 million operating budget. However, since mid-September, "the fare box revenue are taking in about 55 percent of what had been expected by this time," according to the analysis.

The report suggests that the Transportation Bureau will need to figure out a way to increase the revenue. Otherwise, the operating funds will have to come from general transportation revenues, meaning another program area could face cuts."