Got kids or know families who have kids who go to Claggett or Weddle schools?

Because of the unfortunate siting of the Kroc Center, getting kids from Keizer to it is a huge challenge - and a surpassingly costly one, it looks like.

The Salem Parkway Kroc Center Access Feasibility Study is holding an open house at Clagget Elementary School on the 3 alternatives advanced to the final round of analysis. 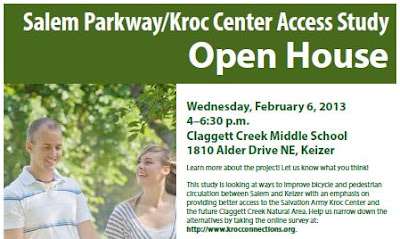 The operative question for parents is - would you really send your kids by themselves on bike, on skateboard, or on foot across these things? And if so, are any of them worth the cost?

The high-medium-low cost estimates range from $16 million to $2 million and it's worth repeating that this is an excellent example of a transportation cost that got externalized out of the initial site and building costs when the center was plopped down in an industrial wasteland. Something like this should have been funded through a System Development Charge!

If large numbers of youth wouldn't use the proposed bridges and pathways, it is almost certain that we could better invest money at or near schools for improved walking and biking.  There are real questions about the return on investment. 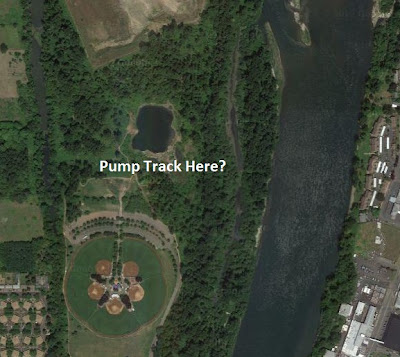 The Salem Area Trails Alliance will be presenting concepts for a "family friendly pump track, jumps and xc trails" in Wallace Marine Park north of the softball fields.  This could be a link in the wider trail system proposed by SATA for the river and Eola Hills, as well as a terrific urban facility for off-road biking!

You might recall the driver who crashed into the Salem Alliance Church building on Fairgrounds and Hood.

Apparently it's not uncommon. The news story cites at least four other instances.

At the last Grant Neighborhood Association it was a topic of conversation:


Tim is continuing to work with the City on the placement of a barrier at Hood Street and Fairgrounds Road, but it is going slowly and he is getting some resistance. The building repair costs are now estimated to be $140,000. Also, SAC's insurance company is threatening to drop coverage if no protection is put into place. This building is occupied, at times, by 4-5th graders and also a Grant School after-school program. It is time to write and deliver the NA's letter to Peter Fernandez at the City. 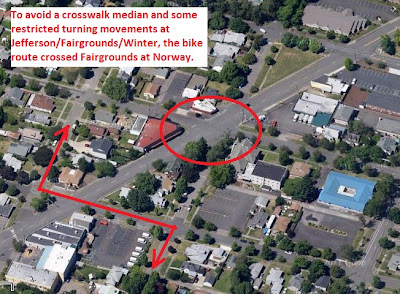 In Bike and Walk Salem, the north-south route along Winter Street was adjusted to cross Fairgrounds on Norway instead of the seven-legged intersection of Winter/Fairgrounds/Jefferson. Earlier there had been proposed a crosswalk, pedestrian median, and other traffic calming for this intersection, but the neighborhood objected.

Instead of accepting the straight shot that "forgives" high speeds and results in people crashing into the church building after failing to navigate the turn onto Hood at an appropriate speed, maybe it's time to reconsider traffic calming on Fairgrounds again?  A barrier does nothing to reduce the speeds, but traffic calming will!
Posted by Salem Breakfast on Bikes at 7:00 AM

Thanks for posting the information about the Open House.

For those unable to attend, the website (www.krocConnections.org) has information and an online survey to gather public opinion.

The survey ends this week, and the results will be given to the project Stakeholder Advisory Committee at their Feb 12th meeting.