Reading Sunday's profile of Michael Wolfe I thought of Arthur Moore's profile from 1948, when he was 75! 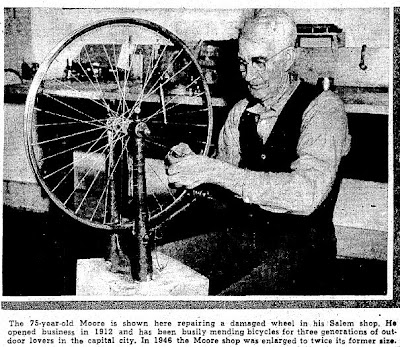 Even as a feature, it is a little embellished and the writing padded; it glows with a bit of a mythic aura. It's not advertorial, but it reads like PR. And there's no mention of brother Frank J. Moore, so its cheer might be suspect. There's also what looks like a compositional or editorial seam at the end where the reference shifts between "Moore" and "Mr. Moore."

Still, even if it might not have much value for the particulars of Salem history in the 1890s and early 1900s, it is certainly interesting as a document of the way bikes were perceived in 1948.

Do you know anything about the other details, especially about bicycling during World War II or the dancers? Downtown in the 30s and early 40s sounds like it was hopping!  Can you imagine that level of activity now?

But nevermind the historical and interpretive uncertainty!

Bicycles came to Salem to stay many years prior to 1912 when Arthur H. Moore, 6-foot-4-inch son of F. A. Moore, early day judge of the state supreme court for 30 years, decided to make a career of the wheel business. 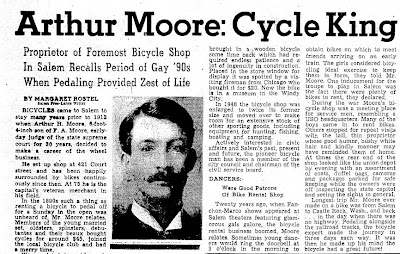 
He set up shop at 421 Court street and has been happily surrounded by bikes continuously since then. At 75 he is the capital's veteran merchant in his field.

In the 1890s such a thing as renting a bicycle to pedal off for a Sunday in the open was unheard of, Mr. Moore relates. Members of the young married set, oldsters, spinsters, debutantes and their beaux bought cycles for around $45, joined the local bicycle club and had a merry time.

Women tried to outdo each other in assembling fetching riding costumes, including sailor hats to suit the season, voluminous skirts waist high with high collars, tucks and bow ties. Salem men, too, were vain about the appearance they made as the wheeled along with the breezes whipping their checkered coattails, removing gloved hands from handle bars to doff derbies to pedestrians.

The club built a race track where the new post office stands. Events there drew large crowds of spectators and tireless participants. Favorite route for joy riders was from Salem to Turner. Club members built a special bridge by the state training school to take the edge off the hill.

Always the life of the party because of his keen sense of humor, the future owner of one of Salem's first three bicycle shops became increasingly popular with the purchase of the second tandem bike to be seen in town. It cost Arthur $140 and assured him plenty of dates with the fair sex.

Frequent passenger on the bicycle built for two was Miss Elida Ryan, whom he married in 1896.

Before going into business, Moore had been in charge of carpentering at the state hospital where he met some of his closest lifetime friends - among the attendants, he says.

After occupying a number of different locations here, Arthur built the Moore apartments at 241 North High street in 1923. Made up of eight units, the building's first floor was reserved for the bicycle store and quarters for another shop.

When the bike rental department was installed, rate for an entire afternoon was 25 cents. Today's fees still keep cycling in the class of inexpensive, healthful transportation.

Among regular callers at the bicycle shop are grandsons and great-grandsons and daughters of Moore's long-time customers and friends. They come to order new bicycles; to bring an ailing wheel for repairs, and often just to pass the time of day with the proprietor, whose blue eyes and quick smile reflect good cheer and a zest for living.

One of his Stayton friends brought in a wooden bicycle some time back which had required endless patience and a lot of ingenuity in construction. Placed in the store window for display it was spotted by a visiting fireman from Chicago who bought it for $20. Now the bike is in a museum in the Windy City.

In 1946 the bicycle shop was enlarged to twice its former size and moved over to make room for an extensive stock of other sporting goods, including equipment for hunting, fishing, boating and camping.

Actively interested in civic affairs and Salem's past, present and future, the pioneer bicycle man has been a member of the city council and chairman of the civil service board.

Twenty years ago, when Fanchon-Marco shows appeared at Salem theaters featuring glamorous gals galore, the bicycle rental business boomed, Moore relates. Sometimes young dancers would ring the doorbell at 3 o'clock in the morning to obtain bikes on which to meet friends arriving on an early train. The girls considered bicycling ideal exercise to keep them in form, they told Mr. Moore. One inducement for the troupe to play in Salem was the fact that there were plenty of bikes to rent, they declared.

During the war Moore's bicycle shop was a meeting place for service men, resembling a USO headquarters. Many of the boys came in to rent bikes. Others stopped for repeat visits with the tall, thin proprietor whose good humor, bushy white hair, and kindly manner may have reminded them of home. At times the rear end of the shop looked like the union depot by evening with an assortment of coats, duffle bags, cameras and packages parked for safe keeping while the owners were off inspecting the state capitol and seeing the sights in general.

Longest trip Mr. Moore ever made on a bike was from Salem to Castle Rock, Wash., and back...[sic] in the day when there was no highway. Pedaling alongside the railroad tracks, the bicycle expert made the journey in three days each way. It was then he made up his mind the bicycle had a great future!

Salem wasn't probably much tuned in to the latest jazz, but here's some Duke Ellington circa 1940. 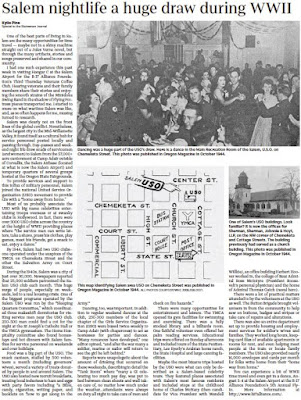 The paper today has a very interesting history column on USO clubs and the large numbers of people here during World War II. The clubs were just two blocks from Moore's shop and building on High Street.


Day-passes and weekend night life drew scads of servicemen (and women) to Salem from the 57,000+ acre cantonment at Camp Adair outside of Corvallis, the Salem Airbase (located at what is now the Salem Airport) and temporary quarters of several groups hosted at the Oregon State Fairgrounds....

By 1944, Salem had two USO clubs - one operated under the auspices of the YMCA on Chemeketa Street and the other the Salvation Army on Court Street.

During the 1940s, Salem was a city of just over 30,000. Newspapers reported that 25,000 soldiers patronized the Salem USO club each month.

Fixed the Duke Ellington clip and added a note from the paper's history column on USO clubs and activity in Salem during WW2.

Here's an old photo of the former Unitarian Church that housed one of the USO clubs, across the street from the IKE Box on Chemeketa and Cottage.