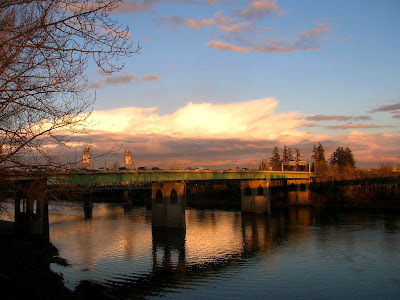 Well now. This is interesting.

Is this good data?  It cites assessments from 2009 and in at least one instance shows outdated information.  The bridge on Capitol Street over Mill Creek was just replaced and is no longer deficient. So it is reasonable to verify the data in the T4American map.

To be clear, if you look at the numerical ratings, the two bridges must be straddling a line, with the Center St. Bridge barely fair, and the Marion St. Bridge just into foul territory.  This doesn't mean the bridge is dangerous, I think.  Just looking quickly, the Winter Street Bridge over Shelton Ditch was in much worse shape - before the flooding. Now of course it is being replaced after last year's floods damaged it further.

But what is really foul is the way the current bridge conversation elides the fact that these bridges will need significant work in the not-so-distant future.  The attempt to allocate new resources to a new giant bridge and highway instead of allocating resources to the repair and maintenance of our existing bridges is bad policy!

(I don't recall seeing anything in the draft Environmental Impact Statement or Purpose and Need or other foundational documents in the process that addresses the condition of the existing bridges.  What I recall is a dubious set of traffic projections that call for capacity expansion.  However, I wasn't looking for an assessment of the existing conditions.  Maybe it's in there.   But I don't think it is.)

So at this point it would be premature to say the Rivercrossing staff and consultants are being deliberately misleading - but they might be being just a teeny bit disingenuous with allowing or helping to create unstated assumptions that the bridges are adequate.  At any rate this merits further research.

But it is clear that this is another significant argument for preservation and maintenance rather than expansion and new construction. And something that Council should be considering before jumping for a preferred alternative that is a big new expensive bridge.

It looks like staff will have a report and recommendation for City Council on Monday, April 8th, and a public hearing scheduled for Monday the 22nd.

There's a City State of Salem's Streets report out.  And - well, son of a gun! - it talks about bridges:

And, whaddayaknow, the City recognizes we have some unfunded, deferred maintenance on local bridges!


The majority of Salem’s bridges were built between 1912 and 1935, placing most of the City’s bridges beyond their planned 75-year lifespan. Only three bridges have been replaced in recent years: Center Street NE Bridge over Mill Creek, Capitol Street NE Bridge over Mill Creek, and Fairway Avenue SE Bridge over Battle Creek. A fourth bridge, Commercial Street SE Bridge over Pringle Creek, is currently being replaced. A fifth bridge, Winter Street SE over Shelton Ditch, was severely damaged by the January 2012 flood and is awaiting complete replacement in 2014....

There's an article in the paper today, but it stresses Oregon's position (not as bad as the others) relative to other states rather than relative to a desired or adequate condition: 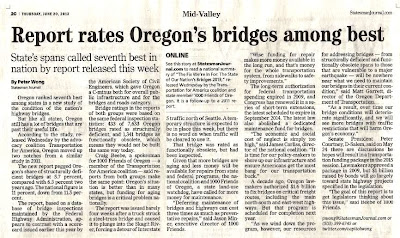 Buried in the piece:


The report, based on a database of bridge inspections maintained by the Federal Highway Administration, appears to contrast with a scorecard issued earlier this year by the American Society of Civil Engineers. which gave Oregon a C-minus both for overall public infrastructure and for the bridges and roads category.

Bridge ratings in the reports of both groups were based on the same federal inspection statistics: 433 of 7,633 Oregon bridges rated as structurally deficient, and 1,341 bridges as functionally obsolete, which means they would not be built the same way today.

Craig Beebe, a spokesman for 1000 Friends of Oregon — a member of the Transportation for America coalition — said reports from both groups make the same point: Oregon’s situation is better than in many states, but funding for aging bridges is a critical problem nationally....

"[O]ur resources for addressing bridges — from structurally deficient and functionally obsolete spans to those that are vulnerable to a major earthquake — will be nowhere near what we need to maintain our bridges in their current condition," said Matt Garrett, director of the Oregon Department of Transportation.

"As a result, over time our bridge conditions will deteriorate significantly, and we will see more bridges with traffic restrictions that will harm Oregon’s economy." [italics added]

The piece did not mention any of Salem's bridges as being deficient or sound.
Posted by Salem Breakfast on Bikes at 10:30 PM

Here's an August 2007 SJ article on the bridge inspection program. It's not clear in this piece that the Marion St. Bridge is "structurally deficient," however.

Updated with City Report on state of streets