While so far Marion County has escaped real drought conditions, this summer has been "abnormally dry" and the farther southeast you go in Oregon, drought ranks from moderate, to severe, to extreme. (There's one last rank of even worse, "exceptional drought," but you have to go to California to see that. But it's everywhere in California.)

You might remember a Climate Assessment for the US that projected a dramatic reduction in summer stream flows by 2040:

That'll impact the Santiam and its tributaries, from which Salem gets its clean, pure, "sweet mountain water." 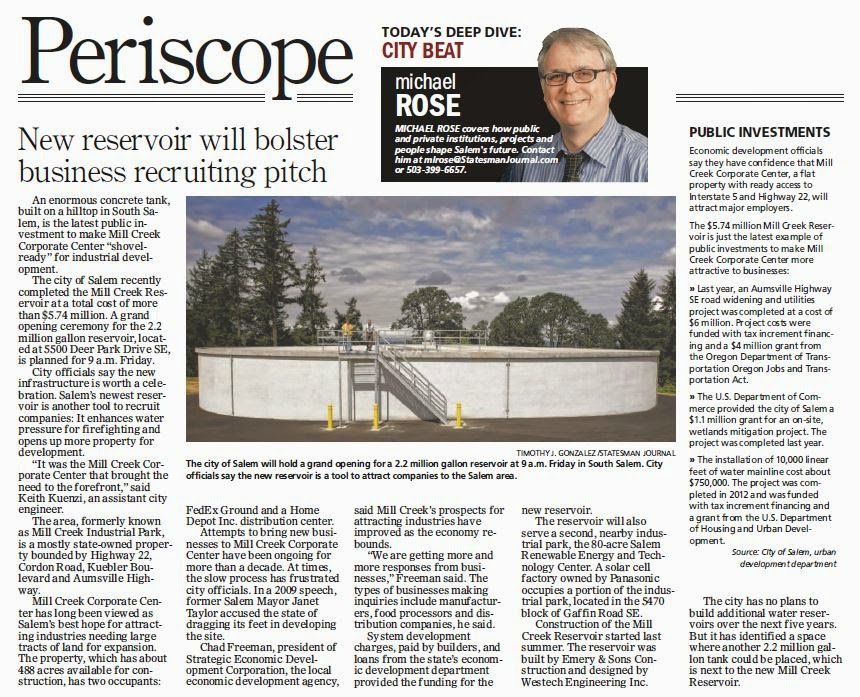 There's news today about a big new reservoir that will serve business and new subdivisions.

The city of Salem recently completed the Mill Creek Reservoir at a total cost of more than $5.74 million. A grand opening ceremony for the 2.2 million gallon reservoir, located at 5500 Deer Park Drive SE, is planned for 9 a.m. Friday.

City officials say the new infrastructure is worth a celebration. Salem's newest reservoir is another tool to recruit companies: It enhances water pressure for firefighting and opens up more property for development.

Here's its cost and some associated investments:


You might also remember the $42 million in incentives to Sanyo Solar and questions about the extent to which they will pay off.

A a couple of years ago, when SKATS was looking at possible TIGER projects, a large amount of investment was considered for this area.

There was one bundle for $12.3 million with three pieces:
In addition, another project for a little over $30 million involved Highway 22 and Cordon road:

At the center of Charles Marohn's analysis of the "growth ponzi scheme" is the claim that the property tax base of the development, both commercial and residential, enabled by this kind of "investment" in infrastucture cannot possibly be big enough to pay off the cost of the infrastructure before it completes its useful life. We will have to build new roads before the old roads are "paid off." New water mains before the old ones are "paid off." A second round of replacement usually happens before the first round of construction is paid for. It's not a sustainable model.

And then back to the water, the bedrock of sustainability.

And the cost of reservoirs and piping to service future development on the edges of the city is another reason to prefer development close-in, in locations already served by existing infrastructure.

So there are, in fact, many reasons to be skeptical about celebrating a new reservoir.

Update - wait, I forgot this great image of "dumping fertilizer on the weeds"!

“Cities and counties have essentially been taking tax revenues from downtowns and using them to subsidize development and services in sprawl,” [architect Joseph] Minicozzi told me. “This is like a farmer going out and dumping all his fertilizer on the weeds rather than on the tomatoes.” [italics added]

Email ThisBlogThis!Share to TwitterShare to FacebookShare to Pinterest
Labels: Drought and our Water Supply, Salem Government and Policy

From the paper today:

"Panasonic's solar factory in Salem is laying off 50 people, more than 1/3 of its workforce.

The layoff, effective April 15, comes about two years after the company let go of 52 workers. In May 2013, the Statesman Journal reported that taxpayers provided more than $42 million in incentives to lure Sanyo Solar of Oregon to Salem. City, state and county governments all provided tax credits, land write downs, grants and other incentives to cause corporate decision-makers to look favorably on Salem."