Later this month the Historic Landmarks Commission will deliberate on a proposal to install more public art around downtown in the historic district. 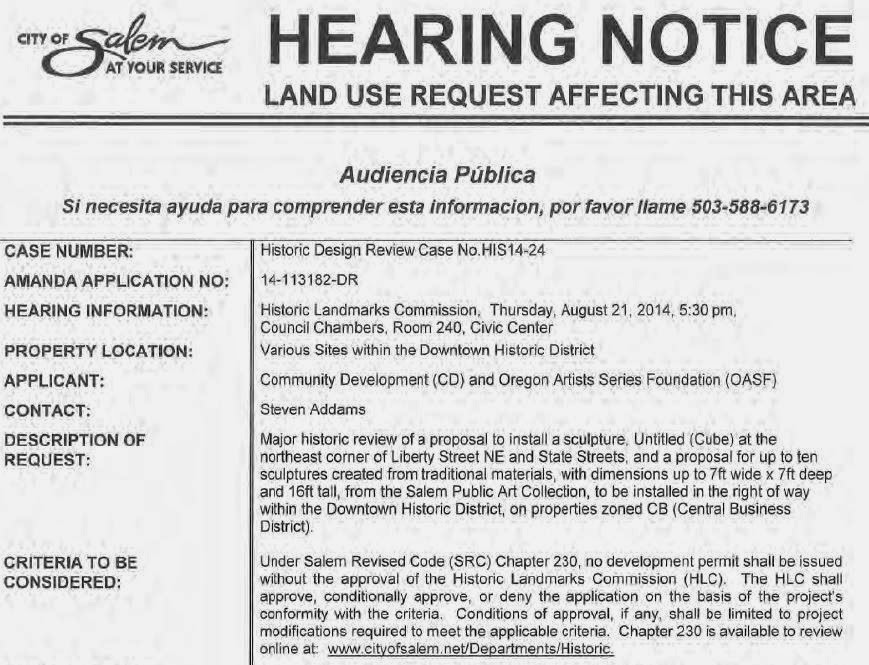 Bruce West's sculpture, "The Cube," is proposed to be relocated...

from the Conference Center to the corner in front of the newly renovated McGilchrist and Roth block.

Other works and other sites are planned to follow.


The first thing that struck me about the sites, is that they cluster too much on Liberty/Commercial and try to decorate the autocentric near-highways. It has seemed that we have to be willing to tame the rivers of cars before we will really be able to do much to make walking downtown really pleasant.

Just out of the Historic District, Chemeketa is trying to become a bikeway, and it could more easily become the superior walkway. A real boulevard for strolling and biking.

At the same time, the best historic buildings and density of small merchants are on the other streets.

And who could possibly begrudge a migration of art from the concrete wasteland sculpture garden* to the enlarged corner bulb-outs where people actually walk and congregate? Maybe passers-by will be into the weird, distorted reflections. This seems like a definite improvement in the match of site and artwork.

So - Question: Overall, is this a meaningful way to improve downtown, or is it an ad hoc and insufficiently considered proposal that suffers from a lack of overall vision on substantially improving the walking environment?

Myself, I lean towards the latter, but it's a weak, not strong, opinion. What do you think?

* Even an out-of-town visitor says "I don't know who landscaped the Salem Convention Center but it is pathetic. I...could have done a whole post about how awful it was."

It was actually a couple of days ago...

Autoism rules. So now we are going to have drive-by sculpture in downtown Salem. I think the location of the new drive-by WWII memorial on Court Street is shameful. I was on the site selection committee and was the sole dissenting vote. I said put it in the middle of Willson Park (replacing the embarrassing Goldschmidt children's sculpture) as a place for quiet contemplation, but committee opted for the drive-by location. We are making the same mistake here. Idiotic.

To place these sculptures in a car centric downtown is an insult to the artist who made them.

First we need a streetscape plan to beautify downtown sidewalks, reduce car traffic, increase bicycle traffic and make downtown pedestrian friendly and desirable. Make a place worthy of the art, and honor the artist who made it.

Salem deserves better than these small-vision one-off attempts at quality of life in Salem.

updated with note on cube installation