You may recall the note about Firehouse Crossing last fall.

It's in the news again, this time for questions about traffic impact. 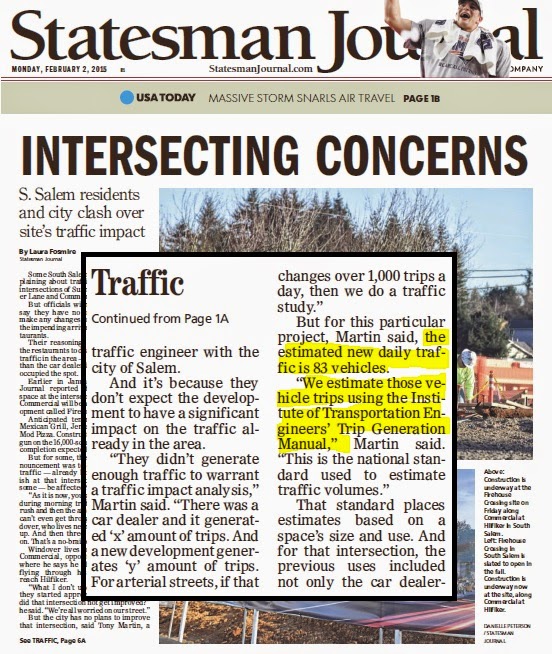 There are lots of interesting things going on in the piece. First off is the near automatic and reflexive concern about "more traffic."

It's not clear, though, what exactly is the fear:


"As it is now, you go look at Sunnyside during morning traffic and then lunch rush and then the afternoon rush, people can't even get through," said Kent Windover, who lives nearby. "It's all plugged up. And then three restaurants? Come on. That's a no-brainer."

Windover lives on the east side of Commercial, opposite the restaurants, where he says he already sees drivers flying through his neighborhood to reach Hilfiker.

"What I don't understand is, before they started approving anything, why did that intersection not get improved?" he said. "We're all worried on our street."

Maybe it's not the intersection of Commercial and Hilfiker that needed to be improved in the minds of neighbors, but the fact that off of Commercial this area lacks sidewalks. At the church and Trader Joe's the street had a half-street improvement and partially "widened to urban standards." But behind this are the old narrow streets from the era of county standards without sidewalks.

Maybe the issue here is equity and sidewalks rather than enlarging the intersection for more car traffic. Hard to say.

Also interesting is the insane precision that "the estimated new daily traffic is 83 vehicles."

That is an exact illustration of the way our traffic modeling offers false precision and needs error bars! What's the confidence interval here?

Anyway, in the big scheme, on a big road, the shift from auto dealer to strip mall is probably not that big a deal - and error bars would help with understanding this! - but even though the neighbors are also using different language, the concern about traffic is also a question about walking - have we made the development easier to walk to?

Speaking of walking, the neighborhood "Just Walk" project was announced as the recipient of a $50,000 grant to build it out further. 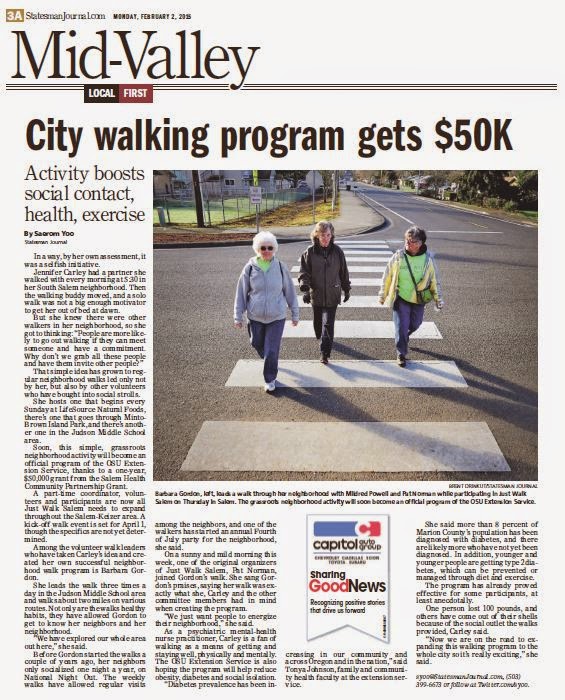 This is super exciting news.

But the choice of photo is interesting.

Even though it's not as well composed, I wish they had gone with this photo, or one taken on the same street, from the same walk:

One of the fundamental questions about projects like "Just Walk" revolves on advocacy. Here's a street without sidewalks. It's totally residential, and maybe there's a small enough amount of car traffic that sidewalks really aren't that important.

But maybe it's a problem.

Like "On your Feet Friday," "Just Walk" is a scheduled walk, an event walk. Salemites seem to like event walks, event rides - carving out separate time for an elective, recreational activity.

Looking at walking this way supports the idea, too, that one might need special shoes, special clothing, even special pedestrian safety equipment. Even as it organizes opportunities for walking, which is a great boon, it may also make walking problematic and extraordinary rather than routine and banal.

Projects like "Just Walk" could turn out to be a gateway activity, a lure to more walking and more advocacy about road engineering and land use.

But as we have seen with the bike club here, and with club riding everywhere, this narrative arc doesn't hold very broadly. Recreational riders in Salem have not jumped to bike commuting or bike advocacy in large numbers. Recreational riding is not much of a gateway.

Will, then, recreational walkers start walking to the store, park once downtown and walk all around, will walking become part of everyday life? Will they think more about how far the stores are from their homes? Will they ask for better walking conditions?

Or will the walking remain stuck in our sort-and-separate model of special time and specialized zoning? And will walkers continue to think they have to "make do" with inferior conditions?
Posted by Salem Breakfast on Bikes at 1:00 PM

When I read the Statesman piece earlier today, my immediate reaction was that the City is once again ignoring an opportunity to improve an important intersection. Where Hilfiker runs into Commercial could certainly be improved for both cars turning north onto Commercial, as well as bikes that wish to do the same. Though certainly not a great comparison, I was reminded of the intersection at Mission and Church, where the City has consistently resisted any urge to improve that pedestrian crossing - even though the hospital is providing them with the perfect opportunity to make improvements! It would be nice to see the City ask for meaningful transportation improvements at every opportunity, rather than simply citing a one dimensional traffic study as evidence that the status quo is sufficient.

Everyone relies on the ITE manual, which is probably as good at predicting reality as using a dartboard. But its the standard!

(Huh. Didn't think there was any ambiguity at all: 83 is the delta, the "estimated new daily traffic." Shoot. Sorry that wasn't clear. Have other readers read it as the total number of trips, rather than the increase, generated by the development?)

83 new trips on top of 30,000 rounds to zero change, well within day-to-day fluctuations in traffic.

That's one example of false precision.

Another is that maybe the range of estimated new trips is actually -534 to +700, with +83 as some kind of hypothetical mean. What are the magnitudes on either side of +83? And what, then, are "the significant digits"? I bet it's not any more precise than +/-100 (maybe more!).

Finally, I wonder about checking actuals against estimated - is there an assessment loop that goes back and checks the projections against reality? When we have these traffic studies that say we need to enlarge an intersection, does the City ever go back and verify the need?

And re: "It would be nice to see the City ask for meaningful transportation improvements at every opportunity" Amen!

Very hard to retrospectively validate the estimate since we all know that widening roads just Causes the latent demand to converge on the widened facility.

Although, this may change in the future, because driving has peaked. Eventually will build things where there is no demand and you will be able to prove that it was overbuilt. But is Robert Moses said just get the damn thing started and you'll never be able to turn it off. The sprawl lobby does not care about your retrospective arguments about overbuilding – they're on to overbuilding the next thing.

But in the meantime, it's Heisenberg's uncertainty principle at work:you can't measure the effect of the change without changing the effect.