It was a strange, sometimes wonderful, but mostly terrible year to walk in Salem, and the increase in people killed while walking is the top story of the year here.

In a nutshell, on August 6th at 7:30pm, folks talking a nice group walk set off in the Highland neighborhood, here pictured at Academy and Hazel.

Less than two hours later, and about two blocks away, in an unmarked crosswalk at Pine and Maple a driver struck Caroline and William Storm, killing Caroline. They were not part of the group walk, and were just out walking the dog. There's no causation here, just coincidence. But there's no denying the symbolism and tragic irony.

That's where we are, an awful blend of the wonderful and the unspeakable.

In general traffic violence and death was up statewide this year. Salem was no exception.

More than anything, it was the deaths of seven eight people, struck down in crosswalks, on sidewalks, and even in a work zone, that mattered most in 2015.

In Memoriam:
The defeat of weekend and evening bus service and the start of construction on the Minto Bridge seemed like the other top stories this year. 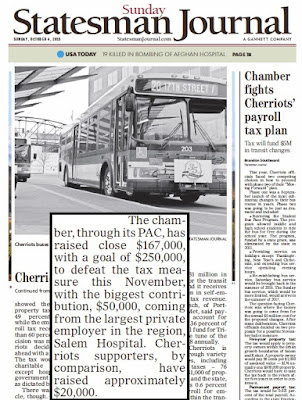 With its big-spending allies like Salem Hospital ($50,000), Garmin AT (35,000), and Norpac ($20,000), as well as unexpected allies like Venti's and Organic Fresh Fingers, the Chamber of Commerce defeated a measure for evening and weekend bus service.

Folks liked to say they supported walking, but when it came to supporting critical infrastructure that actually enables walking, they didn't walk the talk.

Cherriots also launched new routes and schedules in September, as well as a pilot ride-booking service for West Salem in June. The longer-term significance of the new Rideshare Strategic Plan remains to be seen. (See more Cherriots stories here.)

It wasn't all doom, though.

Maybe the most joyous event in 2015 was the ground-breaking in May for the Minto Bridge.

Construction had actually already started and continued through the year.

Some folks still grumble about the price tag and tied-arch design, but in a decade, the bridge will be universally loved and no one will ever say a thing about extravagance. (See more on the Minto bridge here.)

The City also had a slate of bond-funded road construction projects, and many of them contained sidewalks and bike lanes in the context of widening to "urban standards." None of these seemed like game-changers, though. Mostly it was retrofitting to legacy standards from the 1980s.

There were several other strands that seemed notable, though in many of them there was more churn than real progress or game-change.

The Convenience of Demolition

When you walk, old buildings and the histories they suggest are one of the chief pleasures of slow travel. They also incubate entrepreneurs. But in 2015 the City seemed all too eager to help destroy rather than preserve and celebrate old buildings. Here too, they don't walk the talk.

Back in February demolition began finally on Howard Hall. There continued to be trouble with tree preservation, sidewalk widths, and continued appeals on the number of parking stalls. 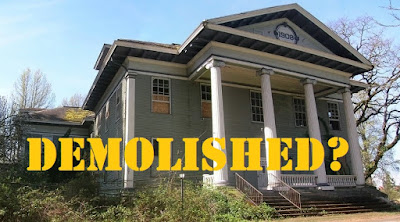 And in December they decided to do it all over again, authorizing Sustainable Fairview to demolish historic Le Breton Hall (1908) before executing the land purchase for a future park.

Redevelopment at the North Campus of the State Hospital has stalled a bit, but lots of demolition looks to be the order of the day there, as well. We will want to watch the Dome Building very closely! (For more on the North Campus see here.)

Still in the planning stages, three other projects had important pieces come together.

The City of Salem was awarded a grant to plan our first full-fledged bicycle boulevard and submitted an application to fund construction itself for crossings at two critical busy streets.

Private funding for the Wallace Marine Bike Park also was essentially completed in November with a grant from our local Rotary club.

And the Urban Renewal Agency and Downtown Advisory Board expanded funding commitments for parts of the Union St Bikeway. They also committed to basic bike lanes on High and Church Streets. (Construction on these is a few years out, however.)

Advocacy also precipitated and grew about around specific projects.

The most interesting was the individual marketing program funded by ODOT for the Grant and Englewood neighborhoods. Unfortunately, little has come out yet about how it turned out. This is from a December report to the Cherriots Board:


The campaign consisted of direct mail communication with 4500 households in the target neighborhoods asking them to complete a pre-survey regarding their travel behavior and mode choice. The survey was followed up by several newsletters with instructions on how to receive transportation options information and a free gift. As requests were received , the literature was gathered together and delivered by bicycle to the requestors’ home.

At the onset of the campaign a full time, temporary employee was hired to assist in the campaign. Her responsibilities included collecting, assembling and delivering by bicycle 600+ go-kits requested by individuals in the target regions. [She] also arranged and/or led a variety of events including a community group ride to the Salem Farmers Market, a historical walking tour, a “Little Libraries ” bike ride and hosting several tableting events.

The lead consultant (Alta Planning) is tasked with creating the final report and we will provide copies or links to it when it becomes available.

Additionally, there was the enthusiasm of the "Just Walk" project, and they did generate some new walking activity, with walks scheduled all around the city. Between April 1st and October 14th it logged 1000 walks - that's about 5 additional walks per day in a city of over 150,000.

But it is clear from both the Grant/Englewood project and Just Walk, things will take a while to grow and scale up to be a meaningful citywide change in walking habits and priorities. Demographically, the numbers round to zero. Scale is something we struggle with constantly, across every advocacy project. Even with the funding and concentrated marketing behind the Grant/Englewood project, change was difficult. Serving tens or hundreds of people is great, and makes for nice little human interest stories, but if we want structural enduring change, we have to figure out how to get to thousands. We haven't solved this one yet.

First to push the City for an application, and then to support the City after the grant award, the Salem Bike Boulevard Advocates focused on the Winter-Maple Bike Boulevard.

Doing much the same with the Wallace Marine Bike Park, the Salem Area Trail Alliance continued its work.

And the Northwest Hub continued to grow and this summer they expanded into an old Safeway on Market and Broadway.

Every little bit counts, but we're far from the tipping point, it seems.

The first phase of Pringle Square, South Block, opened, and phase two started construction. Generally the McGilchrist block renovation has seemed to be a success. New investment at the Grand Theatre has been promising. Several new restaurants opened downtown, and without seeing cranes and all for a full boil, things seemed like they might finally be at a simmer. Downtown health might seem like mainly an economic development story, but it's also a crucial transportation story about walking, biking, and busing. Downtown's health cannot depend on just cars (and it probably never did). We will know downtown is great when it feels supremely walkable, there are fewer parking stalls and surface lots, and more buildings with people working and living.

Other Things, Context, and Background Noise

The public silence and inactivity of the Salem River Crossing project team was striking. In particular, the land-use actions on the Urban Growth Boundary were supposed to have been started, but things have stalled. The monthly expenses are wasteful, but as far as the ultimate end of killing the infernal thing goes, delay isn't necessarily bad.

Peak Oil hasn't happened and instead we remain flooded with cheap gas. Not surprisingly, sales of gas-guzzlers are increasing and driving miles seems to be creeping up a bit.  ODOT's mileage fee pilot program was slow to find users. The City's new regulations on ride-booking companies weren't laissez-faire enough, and the companies decided the Salem market wasn't big enough to be worth it.

In one of former Governor Kitzhaber's final acts, he fired the Chair of the Oregon Transportation Commission. In short order he himself was forced to resign, and the story is now about Kate Brown. Governor Brown's attempt at a Transportation bill in the Legislature fell apart, and there is increasing criticism of ODOT and its leadership that could color the 2016 session.

Rain dampened Salem Sunday Streets this year, and numbers seemed down. Photos show empty streets. Cherriots seemed much more optimistic about it, but their numbers are very hard to believe:


There were a total of 65 organizations that had booths and while no official count of attendees was taken, based on food truck sales, photos from the event and table interactions it is estimated that 3500 people attended the event. While it was hoped that attendance would be higher, the day of the event was overcast and rain was predicted which we believe kept attendance less than anticipated.

In any case, until the route and event connects with neighborhoods and parks, and becomes a real open street event, as a street fair stuck in the emptiness of the Capitol Mall on a Sunday, it will remain limited.

There remains no urgency about Climate Change, and large studies like the Economic Opportunities Analysis and Housing Needs Analysis felt free to ignore climate change as an input or greenhouse gases as something to mitigate. Same goes for the Cascadian Subduction Zone earthquake. "Duck and cover" sure, but it's all on individual preparedness and not enough about our collective need to reinforce key civic infrastructure and institutions, things that cannot be done at the small level of family or business. Again, it's that problem of scaling up to system change.

In a dismissive post on the "consolation prize of bike infrastructure" in the US, somebody lifted the "sharrow" image on Chemeketa here from a 2012 post on this site. (Shh...It's our secret, nobody but us knows it's from Salem!)

Those are the things that stood out here. Did we miss something? What stood out to you?
For previous year-end reviews going back to 2009, see here.
Posted by Salem Breakfast on Bikes at 7:00 AM

This is a terrific review of 2015! I hope it is widely shared. Your insights and wisdom are greatly appreciated by many. Many thanks.

Thank you for a wonderful review of 2015. We can only hope that our new city manager Steve Powers will be successful in helping make Salem into a great city. There have been too many tragedies, e.g. the slaughter of our pedestrians, and the demolition of our historic buildings. The police facility is about to become another casualty, with its $78M? price tag, that is sure to fail, like transit. Good management and transparent government is needed.

Glad it is informative!

Seeing the story on BikePortland today about the serial bike thief and his sentencing recalled that late this fall, Salem Police said reported bike theft was up about 30%. As Portland cracks down, it is possible that some of this problem will move to Salem in addition to whatever other factors are driving growth here. This may be a bigger story even in 2016.

Added Rebecca Schoff to the list of those struck and killed while walking.