In addition to the matter of the proposed Goodwill in West Salem, on Tuesday the 15th the Planning Commission will also hear about a suite of proposed amendments to the Salem Transportation System Plan. As the Staff Report introduces them,


The currently proposed amendments are primarily housekeeping. They include:

1. Updated to the introduction (regulatory context, population and employment forecasts, and travel characteristics);
2. Updates to existing conditions in various modal elements; and
3. Recommendations to support the Chemawa-I-5 Interchange Area Management Plan (a regional project conducted with the Oregon Department of Transportation (ODOT), the City of Keizer, and marion County).

This package of proposed amendments will include changes to the following elements of the Salem TSP: Introduction, Street System, Transit System, Transportation Demand Management, Intercity Passenger Transportation, and Freight Movement. Most of the changes are textual edits; however, there are a few minor policy and map amendments. Staff is planning on presenting a package of more substantive amendments focused on changes to the capital project lists and priorities in the future.

As far as I can tell there's no great change of any significance (see correction just below), though the drift of a number of the edits nods to multi-modal change but may actually retreat from substantive change or action.

Instead of a drift away from drive alone trips, there's a drift towards them.

In the comments Jim points out, and then over at N3B they expand on, an edit whose probable significance I missed and which is actually quite consequential.

Very early in the introduction there is a paragraph on the "planning horizons." The current TSP says "proposed invements in the 25-year plan are matched to anticipated revenue sources."

The revision proposes to strike this sentence, thereby opening the TSP to "wish list" kinds of projects that have no "anticipated revenue source," and surely the greatest of these is the Third Bridge.

So this edit is something of a Trojan Horse.

But (other than this) mostly it's updating, with a lot of passages like this:

The Federal transportation laws have new bill names since the last revision, and all the language about SAFETEA-LU is lined out and replaced by new language about MAP-21.

(But guess what! This is already out of date, and presumably new language about the FAST act will replace the proposed language for MAP-21.)

Some of the outdated regulations are more interesting. Here are vestiges of an old benchmark program - and seemingly now in our prevailing regulatory scheme we don't actually have metrics to assess progress we may or may not be making on transportation.

There's also a fascinating section on reducing vehicle miles traveled that is being struck.


The State Transportation Planning Rule requires that our metropolitan region first work to hold VMT per capita to "no growth" over the first 10 years of the plan, then achieve a 5 percent reduction in daily VMT per capita after 20 years of plan adoption, with a total of 10 percent reduction within 30 years...it will be even more strenuous an effort to meet the 20 percent reduction by the year 2025...it will be difficult to achieve these reductions without a serious commitment from the community to substantially change its driving behavior, agree to pay more for gasoline and parking, and to make significant land use revisions to the Salem Area Comprehensive Plan.

So did we just give up on this? Why is this being deleted? Has a new regulatory scheme rendered this out of date? Or does the deletion simply reflect the lack of political will and community interest?

When we talk about "hydraulic autoism" here, the volume/capacity measurement is one of the key analytical pieces and ways that hydraulic autoism is formalized into our legal and regulatory scheme for transportation in Salem. 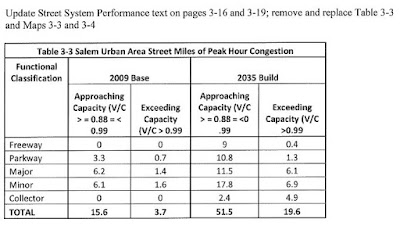 Volume-to-capacity is measurement for a firehose, not a measurement of value created by a street. In an environment whose governing analysis and metaphor is proper to a firehose, it's no wonder walking is made difficult.

A few paragraphs after the table it has a key admission:


It is important to note that even if the Salem-Keizer region is able to build all of the projects contained in the Regional TSP and many from the Salem TSP, we wil still experience more than a threefold increase in the mileage of congested streets during the P.M. peak travel period by 2035 compared to 2009. Thus, we will be unable to build enough capacity into the system to handle all the peak hour traffic demand expected in the coming years. While it is important that these projects be built to reduce congestion, we cannot completely build our way out of congestion.

And this is maybe my favorite edit in the whole thing. It used to read, "we cannot completely build our way out of congestion!" But now a more quiet period mark will do.

That is perhaps evidence that we do not feel urgency about reforming our transportation system and instead are resigned to MOAR CARS.

The revision also strikes a passage about increasing parking costs.

Because Rideshare went from the City to Cherriots, the chapter on Transportation Demand Management is in for a lot of revision.

And in the back where there's a discussion the amendments conformance with the Statewide Planning Goals and the Oregon Transportation Plan, I'm not persuaded these amendments actually address these goals in any substantive way. I don't see new policies in these edits that "aim to reduce energy consumption...[and] demand for single-automobile trips."

I don't know that all this matters a whole lot. But if the tidying-up process might have tended to highlight walking and biking and transit, instead it seems to retrench on our prevailing autoism.
Posted by Salem Breakfast on Bikes at 7:00 AM

There's a big change proposed in the Introduction that you apparently did not catch. This sentence is being deleted: "The proposed investments in the 25-year plan are matched to anticipated revenue sources." Why delete this if not to be able to add the 3rd Bridge to the TSP, since it is clear that funding for the 3rd Bridge cannot be "matched to anticipated revenue sources" that aren't a complete fantasy?

You are right! I puzzled over this sentence and ultimately decided not to remark on it since I didn't suss out its significance. The RTSP that SKATS does have a list of short-term projects that are "fiscally constrained," and a longer-term "wish list." The change seemed to be in line with that process, and I didn't think to tie it to the bridge in particular. Thank you very much for the catch and remarks.

Regarding the RTSP, the '...short-term projects that are "fiscally constrained"...' cover 20 years. Never really considered 20 years "short-term" but with the increasing time it takes to get anything funded and built perhaps you are right (and this isn't just limited to transportation projects).


To understand what the TSPs for the cities and counties in Oregon should contain, download the TSP Guidelines put out by ODOT in 2008 http://www.oregon.gov/ODOT/TD/TP/Plans/Guidelines.pdf

They also have a nice "finger guide" so you can quickly find what you are looking for: http://www.oregon.gov/ODOT/TD/TP/Plans/FingerGuide.pdf

The SKATS RTSP operates with three buckets, as I understand them, and the middle bucket is ambiguous, counter-intuitive, and confusing to me.

Anyway, it is interesting that the same standards do not apparently apply to a city's TSP.

ODOT's latest guidance (the link for the 2008 TSP Guidance) is closer to the federal rules/requirements/guidance than in the past (if I recall correctly), but still not identical.

Federal regulations require that we must constrain the project list in the RTSP to those funds that are "reasonably anticipated" to be available over the time frame of the Plan. These funds are forecast based on current and past funding levels, current legislation and consideration of how the area will change in 20 years (e.g. population growth). We can't assume new funding streams (such as a carbon tax) unless there is some justification it will likely happen in the next 20 years (the legislature is talking about one and the public opinion is for such a measure). [And no, there is no carbon tax assumed in the RTSP].

The projects in years 5-20 of the RTSP are currently identified as having the highest priority to receive the 'reasonably anticipated' funds. I'll note that that (a) the RTSP is updated every four years and (b) the priorities for each jurisdiction can, and does, change.

Projects in Appendix I of the RTSP are not part of the fiscally constrained plan are represent projects identified in planning studies by the local governments, transit and ODOT as addressing a safety, accessibility or other issue.

Of course, there are always events that happen that weren't forecast to happen. In the past 20 years or so, the amount of federal funds the area receives is higher than forecast in the 1996 RTSP (the federal surface transportation acts have increased the yearly distribution more than was anticipated, and FAST Act continues this at least for the next 5 years), even without an increase in the federal gas tax in the same time period (which most planners would've predicted happening).