As the year winds down, two more crashes on Mission Street have been in the news.

One of them yesterday evening resulted in injuries fatal today to a woman who was crossing the street.

Rebecca Schoff was the eighth person on foot to be struck and killed this year by a person driving a car.

From the Salem Police last night, the 29th:


The Salem Police Traffic Control Unit is investigating a pedestrian/vehicle crash that left an adult female with life-threatening injuries.

Today at approximately 5:43 pm, Salem Police officers were dispatched to a report of a pedestrian/vehicle crash that occurred on Mission St SE and Ford St SE.

When officers arrived on the scene, they found that 29-year old Rebecca Schoff of Salem had been struck by a Bales and Brady Tow Truck that was being driven by 35-year old Timothy Hall of Salem. Hall remained at the scene of the crash and cooperated with investigators.

The investigation showed that Rebecca Schoff had been crossing Mission St SE at Ford St SE in an area that had no crosswalks, marked or unmarked. Timothy Hall was driving the tow truck on Ford St and was turning left onto westbound Mission St when he struck Schoff while in the special left turn lane on Mission St. Schoff was transported to Salem Hospital with life-threatening injuries.

No arrests have been made and no citations issued at this time, and the investigation is continuing. Anyone with information on this crash is asked to contact the Salem Police Department at 503-588-6123.


Ford makes two T-intersections with Mission, and it seems to me there are unmarked crosswalks at the corners. So understanding the statement that the crash happened "in an area that had no crosswalks, marked or unmarked" is difficult.

In an update for the paper,


Lt. Dave Okada of the Salem Police Department clarified that while the incident occurred in neither a marked or unmarked crosswalk location, there is no law against jaywalking in the state of Oregon.


The victim from yesterday's pedestrian/vehicle crash has died as a result of her injuries. Personnel at Salem Hospital informed investigators that Rebecca Schoff passed away at approximately 3:30 pm today.

The Salem Police Department would like to remind motorists and pedestrians alike to be aware of each other along our roadways. Pedestrians should wear brightly colored and/or reflective clothing and carry lights, while motorists should be reminded to be extra careful and aware of pedestrians. Also, pedestrians should never assume that a motorist has seen them and should always look both ways before entering a roadway. Remember, be aware and drive with care, and put your best forward before crossing the street.

Another Crash a Few Days Earlier 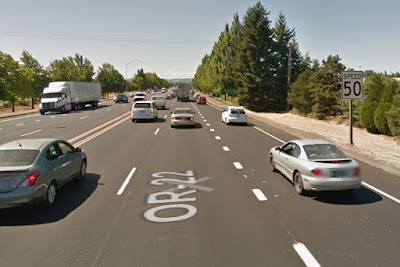 This hasn't been updated for a couple of days, but if a fatality had been involved, more probably would have come out.

The paper's facebook site also had comments from someone who claims to be a witness and suggests it was a person on bike who was struck, not a person on foot.

The intersection is where James Sinks killed Connor Jordan in 2012, when he blew a red light and struck Jordan in the marked crosswalk. (Sinks was cited "for failure to obey a traffic control device and failure to yield to a pedestrian in a crosswalk" and fined $560.)

Mission Street is eight lanes wide here (six through lanes and dual turn lanes) and signed for near highway speeds (see image at top). A crash impact at speed is almost certainly fatal to someone on foot or on bike. Hopefully this was not at speed.

Both crashes are strong reminders that Mission Street is terrible for people on foot and on bike.

A person biking in Monmouth was rear-ended and killed yesterday evening.

EMTs arrived at 6:46 p.m. and pronounced the victim dead.

The cyclist, identified as 52-year-old John Shapley, was struck from behind while riding his bike. Officials said they believed he was killed instantly....

No criminal charges have been filed. The investigation is ongoing.

Hoffman Road here is signed for 40 and 45mph. It has minimal shoulders, it appears.

Posted by Salem Breakfast on Bikes at 6:00 PM

I just want to correct Dave's incorrect statement.
Jaywalking is not allowed in the Salem downtown area.

Looks like there is a poorly located bus stop in this area too. Perhaps the stop should be near the light, so pedestrians are not challenged to cross here to catch the bus.

I agree that in major arterials we give more emphasis on letting cars go fast than we do to providing crosswalks. I note that Lancaster Drive is also very dangerous because of the limited signals where a person could hopefully be safer to cross the extra wide street.

The theory is that too many lights will slow down traffic flow, but if that were totally true then why do we have stop lights every corner downtown? Maybe we need to accept that sometimes traffic just does not need to go that fast. Lights can be synchronized so as to allow for smoother traffic flow like on South Commercial between Mission and Rural without sacrificing crosswalks.

If we need ways to get from point A to point B we could keep some roads as by-passes and not make streets serve multipurpose like commercial and highways too.

From Seattle Bike Blog via Sightline, article on recent GAO report on poor street design as factor in vehicle vs bike/pedestrian collisions.
http://www.seattlebikeblog.com/2015/12/28/congressional-report-us-street-design-sacrifices-people-biking-and-walking-to-move-cars/

Updated with sad news from Monmouth-Independence about the death of John Shapley while biking.

Thanks for the note about the GAO report.

Be careful out there tonight.

Don't recall reading about this forum on transportation here, but maybe I missed it.