Lots of interesting bits this week in neighborhood news.


The State Street Corridor study has the first survey out! 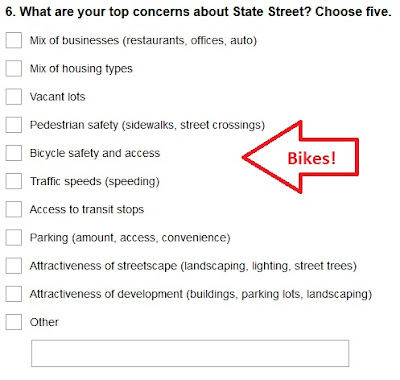 Weigh in on this important study full of possibility for reshaping State Street between 12th and 25th to be more walkable and bikeable, more vibrant, interesting, and prosperous. (For previous notes and posts on the study, see here.)

From the November CANDO minutes:


Officer Vanmeter reported that SPD makes 5 - 6 drug/alcohol - related arrests per day under the Center St. Bridge near UGM. As a consequence, Public Works Director Peter Fernandez and SPD had agreed it would be preferable to prevent the need for arrests at this location by better "environmental design", i.e., by fencing off the area under the bridge. Both Public Works and SPD recognize that this course will merely send the problem behavior elsewhere. No timeline was given, but it seemed from what was said that action was likely to be taken within the next 60 days.

This is direct evidence for the kinds of problems the ramp spaghetti associated with the Salem Alternative will introduce in the Edgewater district and Highland neighborhood.

Also from the NEN minutes on December 1st is evidence for a disconnect in Enforcement practices and Engineering/Design best practices:


[A resident] has noticed a lot of speeding traffic on 14th St. since moving there. [Another resident] wanted to know if can put speed bumps to slow traffice down...[a board member] said that 14th St. is a local collector and city will nto allow. [The first resident] said the street is narrow. [Officer] Nunez said many streets in this area are narrow and dangerous.

Great graphic by @TransPsychology we need to design our roads for the speed and behavior we desire pic.twitter.com/Tqa3IRl5I8
— Darren Proulx (@dnproulx) October 31, 2015

Narrow streets promote slower speeds and are easier for people on foot to cross. It may be a misunderstanding to describe these residential streets as more dangerous than wider streets. Also, police "do not ticket people going 6 to 7 mph over the speed limit." But for a person on foot in a 25mph zone, 7mph multiplies the probability of death by a large margin. In a car it seems trivial, but on foot or on bike it is often the difference between death or severe injury on the one hand and lesser wounds or even stopping in time on the other.

There was also more about the Ice Cream Factory at 18th and State. A mention of a prospect for a restaurant at Ice Cream factory site looked especially promising! Hopefully more will come out about this. Also because of the needs for insulation to keep the ice cream processes cold, some of the walls are especially robust and it sounded like they were excellent raw materials for the remodel and would not be demolished.

There's a couple of interesting matters at the Historic Landmarks Commission on Thursday the 17th.

The Hospital has a new sidewalk plan, and the Staff Report recommends approval on the appeal of the old sidewalk and tree protection plan.

This time the bulk of the sidewalk expansion will go on the inside of the sidewalk, on the east side of it, and not go west into the outside curb strip and into the root zone of the trees.

The appellant has also compiled several photos of what look to be careless tree protection practices at the site.

Much more optimistic is the plan for the Baggage Depot renovation for Greyhound. It's also recommended for approval.


It's also worth saying again that Leah McMillan is running the rehab design for Nathan Good Architects, and her husband is the new Executive Director at Mission Mill. This is a wonderful convergence for historic preservation in Salem.

The "modern" (but ugly) design for the bus canopy is a mismatch for the historic look of the other buildings. We should ask for something better.

"Up to two canopies are proposed to provide shelter fo r Greyhound customers during loading and unloading. In the last submittal, a glass canopy with tube steel was proposed. Because of changes on site and the need to drain water to the landscape areas, a new canopy design has been developed . This system uses both wood and metal and maintains a modern look that does not compete with the historic buildings."

I think there's a desire to make a clear distinction between historic materials and building and new additions - no Disneyfied faux-historical treatment, hence the clear stylistic difference.

It will be interesting to learn if others have the same opinion. This has seemed a minor matter, but perhaps others disagree.

In any event, though I don't know the outcome of the HLC's decision, the hearing has passed and it's probably too late for someone to argue for a more "historic look."