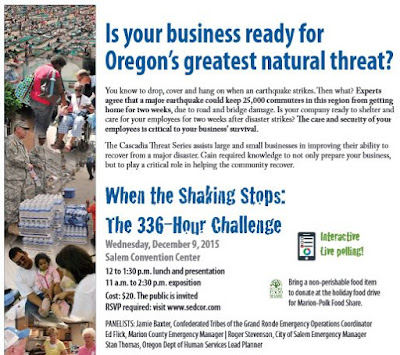 This is interesting. From the City:


The 336 Hour Challenge
Experts agree that the next major Cascadia earthquake could keep 25,000 commuters in this region from getting home for two weeks, due to road and bridge damage! Is your business ready to shelter and care for your employees for two weeks after disaster strikes? Are you also prepared at home?

SEDCOR’s Cascadia Threat Series assists large and small businesses in improving their ability to recover from a disaster. Gain the knowledge you need to not only prepare yourself and your company, but to play a critical role in helping the community recover.

The City of Salem is partnering with SEDCOR, Marion County, Oregon Emergency Management and the American Red Cross for this purpose on December 9, 2015 at the Salem Convention Center. There will be lunch and a presentation from noon until 1:30 p.m. Exhibitors will be available from 11a.m. until 2 p.m.

Admission including lunch is $20. To register and learn more go to 336 Hour Challenge.

It seems like there's some increasing realism here about the disruptions caused by the earthquake - even if two weeks seems yet on the short side. If it's as massive as they say, months seems more realistic than weeks.

At the same time, it's still about finer-grained and small-scale preparation for individuals rather than about infrastructure. So still not very much about the massive significance of preparing the Marion and Center Street Bridges. How many State employees and managers live in West Salem and won't be able to reach State offices?

If we assume that the probability of earthquake is evenly distributed, there are 168 hours in the week and 40 hours in a standard workweek. So the odds that earthquake strikes while you are at work are only about one in four - and the more likely problem is  you are away from work and you can't get to work.

It still seems like we're talking about one big camping adventure and not enough about the loss of life, critical services, and infrastructure.

Mountain Biking and other Trails 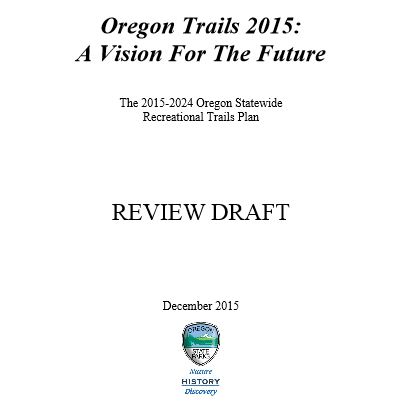 Oregon Parks and Recreation has been working on a new statewide ten year trails plan. Titled "Oregon Trails 2015: A Vision for the Future," it's out for public comment. The project site has a comment box, and they'll be taking comments until January 6th. Hopefully our friends at SATA will have some specific analysis and commentary on it, as this is right up their alley. If it's up your alley, take a look at it and let 'em know what you think!

Closer to our alley here, the project to realign Doaks Ferry at Highway 22 is having an open house and it might be worth your attention.

As I understand it, the part of the realignment is red is already committed, but now there are some additional options on the table for local access - "backage" and "frontage."

One thing that has had little discussion or visibility is that sidepath along Highway 22 and through Holman Wayside.

If the realignment project does not also include improvements and maintenance for the sidepath, it will have been a great failure.

If you travel along here often, there will be an Open House on Wednesday the 9th from 6 to 8 p.m. at the Northwest Viticulture Center, 215 Doaks Ferry Rd.
Posted by Salem Breakfast on Bikes at 8:00 PM