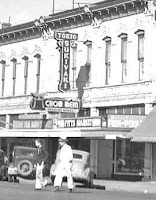 Yesterday we noted the Mill's online restaurant history exhibit. One of the most important chapters is the one on Frank Teruhiko Tanaka (1887 - 1980) and his Tokio Sukiyaki House on Commercial Street.


Business was good until international affairs led to increased hostility and discrimination against people of Japanese descent in Salem. Even before Pearl Harbor, the Tanaka family took out advertisements in local Salem publications to show their dedication to the U.S. Despite this patriotism, business dried up at the restaurant and it was forced to close in 1942. Soon after the Tanaka family was forced to leave Salem for an internment camp under Executive Order 9066....They did not return to Salem.

In the 1940/2014 side-by-side, you can see the restaurant in the middle at top, above Fitt's. The buildings on the south half of the block, especially at the corner, were heavily remodeled in a moderne style just a couple of years later, so much so that some accounts describe the buildings as new construction. In the contemporary image, you can see the lone remaining part of the Eldridge Block, which was mostly demolished for parking, and which remaining part Greenbaum's fortunately preserved.

You probably have heard before that Abigail Scott Duniway was very early, and for a brief while, a teacher at Eola, way back when it was known at Cincinnati.

There's another curious woman with ties to Eola.

Somewhere up in the old town of Eola was the house of former State Librarian Cornelia Marvin Pierce. (Is it still there?)  After she retired from the library, she married former Governor Walter Pierce, who is known to have had connections to the KKK and may even have been a member. "Reflecting on her career in 1955, [Cornelia] characterized as highlights her support of leading eugenicist Dr. Bethenia Owens-Adair, and her husband Governor Pierce's 1923 passage of Oregon's sterilization law."

Sterilization was practiced both at the State Hospital and at Fairview and the Sterilization Board wasn't abolished until 1983.
Posted by Salem Breakfast on Bikes at 12:01 PM

It's too bad that Walter Pierce is always remembered for his ties to the KKK and Cornelia is often remembered as a eugenics champion. It's too bad because those two things actually played a very small part in their stories. I don't believe there is any evidence that Pierce was ever a member of the KKK. He was strongly supported by them in his run for Governor but later had a falling out with them. He went on to become a New Deal Democratic Congressman — a strong supporter of FDR. Cornelia was his Chief of Staff and had a big influence on his progressive views. As for Cornelia, she should be remembered as the first, and by far the greatest, Oregon State Librarian. I hope people read the article in the Oregon Encyclopedia that you link to. Today Oregon has one of the best systems of public libraries in the entire U.S. (we check out more books per capita from public libraries than any other state), and that fact has a lot to do with Cornelia's early leadership.

Really? Business was good until << international affairs >> led to increased hostility and discrimination against people of Japanese descent in Salem? Are we that afraid to hold ourselves to account?

A reader has pointed out that Virginia Green has a brief discussion and a current aerial of the Pierce House, into which apparently the Pierces moved in 1954.

On Walter and Cornelia, thanks for the info, Jim!

While this is a slender post for this, I want to suggest there might be reasons to disagree.

It's hard to know where the balance falls. I'm inclined to think, though, that you may understate how important the nativism and eugenics were. Without knowing the details of the 1955 citation it is not possible to be definitive, of course, but Cornelia herself identified that eugenics, and not the expansion of library services, as the highlight of her career. She might be mistaken about herself and her future importance, as it is the library expansion, as you say, that is the far greater legacy today, but apparently she herself did not think her embrace of eugenics was at all minor.

As for Walter, the final two paragraphs in his OE entry emphasize a lot of nativism in addition to the New Dealism:

"Walter Pierce served ten years in the U. S. House of Representatives and proved himself a firm believer in New Deal policies. He supported Columbia River hydropower, the Social Security Act, and believed government had broad responsibilities for the general welfare.

Pierce also held fast to his nativist beliefs, supporting the incarceration of Japanese-Americans after Pearl Harbor and campaigning in 1944 and 1945 against the return of Japanese citizens and aliens to their homes. After his congressional defeat in 1942, Walter Pierce retired to his new home near Salem where he died in 1954 at the age of ninety-one."

As we are seeing with the debate over the legacy at Princeton of Woodrow Wilson, these early 20th century Democratic politicians had a lot of warts. (And our own self-understanding in a history of Salem is perhaps too brightly colored by anodyne notions of "heritage" and "heritage tourism" that gives insufficient attention to power and conflict.)

Though an essay on the hottest musical on Broadway might not seem like the place to look for more on this, I think this is relevant in pointing to a generational shift in perspective:

"Two generations ago, popular historiography was dominated by the thinking of Arthur Schlesinger Jr., a historian and Kennedy administration aide who produced admiring books titled The Age of Jackson and The Age of Roosevelt. This tradition aligned neatly with the imperatives of the Democratic Party, and emphasized the idea of a continuous tradition of standing up for the little guy, starting with Jefferson, continuing with Andrew Jackson, and moving onward into the administrations of Woodrow Wilson and Franklin Roosevelt and Kennedy. In this historiographical tradition, the little guy is, implicitly, white. The Schlesingerian historiography also struggles with the fact that the two most celebrated American politicians of all time — George Washington and Abraham Lincoln — were both in opposition to the Jefferson-Jackson political tradition.

In the more recent generation, a new historiography has emerged that celebrates not only Washington and Lincoln but also the lesser-known Federalists, Whigs, and Radical Republicans who operated in the same tradition."

Andrew Jackson needs to be displaced from the $20 bill for sure! And Jefferson is losing some of his shine. And those Radical Republicans surely deserve a closer look notwithstanding the failures of Reconstruction.

I'm thinking we are seeing a shift of opinion along these lines regarding figures in Oregon history as well.

It's an interesting question, and it may not be possible to find certainty on much of it!