By adding clicks and layers to the steps citizens have to take to review Council agenda, the new Council website in some ways hinders public access.

The new system's pain in the butt! It may offer a mechanism to publish staff reports and other items in a more timely way, but it also requires additional steps and makes scanning and screening (in the sense of the light reading of documents to determine whether they merit more detailed reading) agenda items more difficult.

It may, in fact, actually make it easier to bury controversial items in hopes they will be overlooked.

The regular overview here will evolve some, and depending on how closely you read, you may find some tinkering and awkwardness.

Here is the Council agenda proper, the Urban Renewal Agency agenda, and the Housing Authority agenda. The old wall-of-text was hard to read, but it was convenient to have all three on one page. This approach looks better logically and seems more organized, but it is less convenient for citizens who want a synoptic overview.

One new feature seems to be that the new format for Staff Reports has already been changed. At first I thought the Reports had disappeared!

But it turns out they may no longer be published as a pdf and instead are some form of html text. 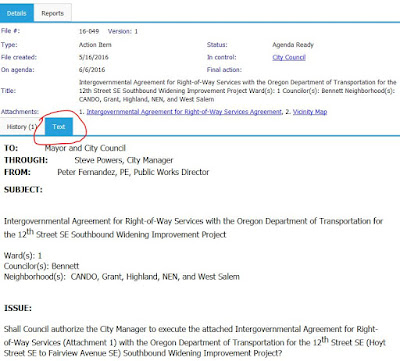 You have to click on the "text" subtab to find the Staff Report in html rather than a pdf. Hopefully that will make searching easier! But hiding behind the tab labeled "text" is not very helpful - that's a little "secret handshake" in spirit.

This item is for the widening of 12th Street SE between Hoyt and Fairview. You may recall that a sidewalk project was bolted onto a new turn lane project. The north half will add sidewalks and a new culvert for Clark Creek to a part of 12th Street that lacked sidewalks. This will be a real help! But there's also a new turn lane being added, and this will likely increase speeds on 12th.

Anyway, the matter at Council is an intergovernmental agreement with ODOT that formally authorizes the City to acquire new right-of-way, which because of the Federal funding for the project was something ODOT only was apparently authorized to do. (Seems like this is an instance of annoying red tape!) 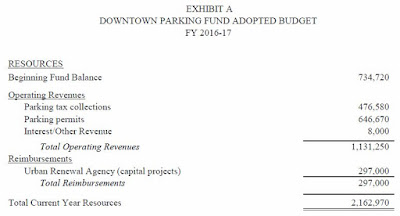 The annual renewal of the downtown parking tax is also on the agenda. The rate will be $147.18 per stall.

Direct revenue from this year's parking tax and parking permit fees is only about half of the budget this year. 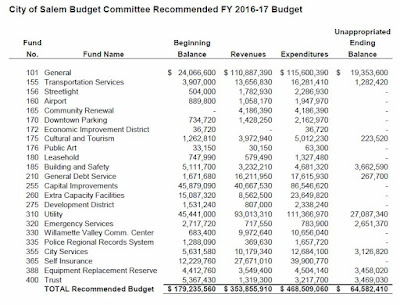 There's also the total annual budget (URA budget here), but it looks like there's a change proposed and the formal adoption pushed back to June 27th:

I think that's everything of possible interest here, but I'm not sure.

Have you explored the new website? What do you think? Do you see anything else, especially transportation-related, to highlight?
Posted by Salem Breakfast on Bikes at 12:01 PM