City to Improve Crossing at Mission and Winter; Progress on Bike Counter Installation

Two very close-in projects this summer look to help biking in Salem, one for Engineering and one for Evaluation.

At SCAN's May meeting or in the annual newsletter, you might have heard about an interesting part of the Mission Street repaving project scheduled for this summer.

The intersection of Mission and Winter has been a problem for a long time. Winter Street is a key bikeway running north-south, and Mission Street a busy road making for a difficult crossing and significant barrier.

For those on foot, the way on the south side winds with a couple of sharp elbow angles, but it is not difficult to negotiate the 90-degree turns. On bike the tight right-angles and misaligned ramps and bike lanes are a real pain. (Perhaps also for those in wheelchairs.) For both those on foot and on bike the tight quarters also crowd people when they are together waiting to cross north and when there is a weave necessary for those going south.

You might remember an SCI concept that was developed for the intersection back in 2010/11 during the Sustainable Cities Initiative's residency.

The intersection was also discussed as one of the contested matters in the Hospital's Blind School proposals. After the Hearings Officer had ruled against them, on appeal to LUBA, neighborhood advocates


argue[d] that the Bicycle System Element of the city’s TSP include plans for improving the bicycle facilities at the adjoining intersection of Mission and Winter Streets, and that the hearings officer erred in failing to require the Hospital to construct those improvements.

So here we are, not even two years later - and lo! this summer with City's project to repave of Mission Street, we will get a better solution to the intersection.

At the very least there looks to be a little bit of irony in "the testimony of the city public works department and two transportation engineers [concluding] that no additional circulation or transportation improvements were necessary." (Strictly speaking, in legal terms the argument was about "compliance" not "need" - but still.)

Better late than never, as they say!

The basic solution will be a fork in the pathway. (The image here is flipped, so north faces down instead of up.) On the north side of the parking lot, the path will split and connect with the sidewalk in two places. It's a kind of one-way couplet - stay to the right! Two new curb cuts and ramps will be aligned with each fork and with the bike lane striping on Winter Street. On either side of the bike channels, the current ramps with their existing sidewalk connections will remain.

It is conceivable that there might be some queuing congestion when multiple people want to cross, but that's already a problem, and this will be an incremental improvement on the current conditions.

Beyond the physical layout, there is also the dimension of time and sequencing.

Despite the "beg buttons" for the crosswalks, the traffic signal here is on a cycle with fixed times, so there's no need to install a separate pole mounted beg button for those on bike. And indeed the plans don't appear to show one. You'll just have to wait. Traffic on Mission Street here is the priority, and those buttons are essentially dummy buttons. (It may be that new pole-mounted video detection will be installed, however. And perhaps the cycle length can be adjusted or an interrupt inserted so that at least during off-peak hours it is faster to obtain a crossing light. There might be more to say on this later.)

For the east-west axis, there is little change.

No new bike lanes will be striped on Mission Street with this project. Initially for the Blind School project the Hearings Officer had required the Hospital to "to dedicate an additional 12 feet of right-of-way along Mission Street" for bike lanes and sidewalks, but this was deleted. Constructing bike lanes - then or now - would require widening the roadway here and the existing right-of-way is a fairly hard constraint at the moment. You can see how many trees it would take out and how much rebuilding an addition of 12 feet of width would require. Because of the parking lot for Bush Park and requirements for emergency access to Winter Street, it's probably unwise to remove the turn pocket to reallocate road space. Sometimes turn pockets seem like an excess, but this is not one of them. Even if you narrowed the travel lanes, I'm not sure you can squeeze out room for two standard bike lanes. (And there's still the crosswalk refuge in the median at Church Street as well as the historic stone wall at Bush House. Constraints abound here.)

Bike lanes on Mission Street here is a tough one with no easy solution. They seem almost certain to require a major rebuild of the road.

All in all, while the lack of bike lanes on Mission Street will remain a real problem, the north-south crossing will substantially improve. That will be a boon for bike travel! 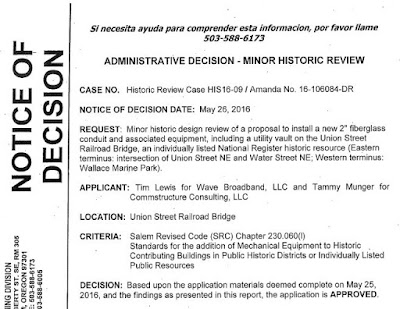 Last month City staff approved "a proposal to install a new 2" fiberglass conduit and associated equipment, including a utility vault on the Union Street Railroad Bridge..."

I suspect it's in part or solely for the automated bike counter! (Update: SKATS Staff suggest it's likely wishful thinking, alas. See comments below.)

Both the Union Street Railroad Bridge and the Minto Bridge are scheduled to get automated bike counters this summer. (Though with Minto construction somewhat delayed, it would not be surprising if that installation were also delayed.)

The City hasn't shared anything specific about the model, so it's not clear that they will have displays or public web graphing like the ones on the Hawthorne Bridge in Portland.

But however they are configured, they will help in establishing some baseline numbers for assessing bicycling in Salem.

I'm sure there will be more to say later this summer on this project.
Posted by Salem Breakfast on Bikes at 1:00 PM


The Pedestrian-Bicycle counter at the Peter Courtney (nee Minto-Brown Island) bridge should be operational when the facility opens to the public.

Salem purchased Eco-Counter MULTIs which are combination pedestrian and bicycle counters. They did not select the versions with the displays like on the Hawthorne bridge in Portland. The totems are more expensive than the versions without a display.

Finally, regarding the conduit; I'm fairly certain that the application you reference has nothing to do with the installation of the pedestrian-bicycle counter on Union Street Bridge. Note the applicant is Wave, which is a company that supplies fiber connections to businesses and homes.

Shoot! Was hoping the counter would be connected to the internet for real- or near-real-time reporting.

Thanks for the info!

Why install a counter on the Peter Courtney Bridge? It a recreational/park amenity. Wouldn't it be more useful to have counts on commuting routes to gather information on people biking for transportation? What would be the goal/use in knowing bike counts for the Courtney Bridge?

1) The counters will track both foot traffic and bike traffic. Walking activity is important, too!

2) The Minto bridge is an investment on the order of $10 million and it will be useful to know about both recreational and commuting use on it. (Remember, too, for auto counts, we don't distinguish between recreation and commuting - a trip is a trip.)

3) This is a start in developing a larger set of counts, not an end-point. It is an imperfect start, but that doesn't make it a useless start.

4) Picking spots for just one or two permanent counters on the regular street system would be quite difficult. (You can read about a manual count project here, which links to a map. Trying to pick two of those spots would not yield very useful data. Biking in Salem is pretty dispersed and it seemed like picking points of concentration - pinch points, really - made good sense.) If this pilot goes well, instead of trying to pick one or two commuting corridors, it may be possible to fund a network of 10 or 20 counters or some kind of deployment that would capture network activity instead of just point-activity.

(You can read more about the funding decision here and here. In general terms it has seemed much better to celebrate the decision for counters, which was never a certainty, than to criticize any particulars in the way they might be implemented. "Don't let the perfect be the enemy of the good" and all that.)