If you bike, you'll know the scourge of chip seal, a coarse but inexpensive substitute for smoother asphalt.

In a car it doesn't make much difference in the feel of the road, but on bike it's a vibratory wrist- and saddle-ache. The wheels of passing cars will sometimes throw a loose "chip." Sometimes, too, the discontinuity on the seam (like in the picture) can contribute to an unwanted wobble in steering.

It's bad news generally for bicycling.

This year, ODOT helpfully sent out a paving schedule for chip seal treatments. 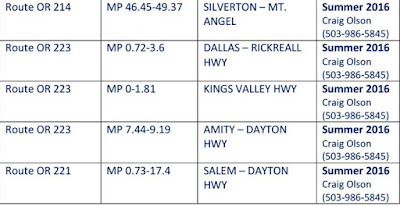 Here are the highway names and milepost numbers for local paving this summer:

Schedules are always subject to change, but the heads-up is welcome.

You might remember back in in 2011 when the BTA formally announced some new branding and a revised mission:


Our on-the-ground advocacy work will focus on the tri-county region including Multnomah, Clackamas and Washington counties.

Though they used this image of the whole state, had a promotional video, "Roll on, Oregon," and a url btaoregon.org, they really meant the Portland Metro.

Between 2011 and now, many in Portland suggested the BTA lost efficacy and was too cozy with the Bureacracy. BikeLoudPDX was formed in 2014/15 as a "more radical" alternative to the BTA, and their first action was a campaign for diverters on SE Clinton Street, an early neighborhood greenway whose car traffic had skyrocketed with construction on nearby Division Street. (Interestingly, BikeLoudPDX is scheduling something in Salem tied to the July 21st OTC meeting. If the matter is not just about Portland, there may be an opportunity for Salemites to show support as well. Will try to find out more!)

The BTA announced yesterday that there's another revision in the works.


Bicycle Transportation Alliance (BTA) Board of Directors and Staff are excited to announce that we are expanding our mission to include walking and transit to ensure that the Portland region remains one of the best biking, walking and transit cities in the country.

With the mission expansion, the BTA’s will change it’s name and create a 501(c)4 advocacy arm, and possibly a political action committee, that would allow us to more directly influence candidates and issues. The formal transition is expected to occur in the fall of 2016.

For more see the FAQ and additional comment at BikePortland and the Mercury.  Not everyone is happy, and some of the criticism, though not all, is interesting. Though the change widens the mission to embrace transit and walking advocacy, they'll still retain the focus on the Portland Metro area.

Regular readers here will have noticed here that there is much less on straight-up bicycling and bike culture than there used to be, and several of the reasons for that are the same ones the BTA cites. I don't really know how far niche bike-advocacy gets you without also talking about land use, transit, and walking. It's more about changing the total transportation mix with a robust menu of realistic options, which are generally perceived as safe and comfortable and inviting, than it is about making sure there's a bike lane on every mid-sized and large road. Their decision is easy to understand, and it has seemed like the autoist lobby has used a divide-and-conquer approach to make sure the funding slice for "alternative modes" remains slender. The "alt-transport" forces need to have a united front against the autoist hegemony! (Or something like that.)

Anyway, this won't probably have much of a direct effect here in Salem, but it will have network kinds of effects in advocacy generally and at the Legislature. There could be some early lifting for the proposed statewide transportation package in 2017, for example.

Something to watch with interest.
Posted by Salem Breakfast on Bikes at 7:00 AM

To echo your thoughts, it seems like a logical next move for them.

Curious to see how this impacts some of the other organizations like Oregon Walks as noted in the BP comments.

I'm still smarting over the repeated fundraising emails that seemed to be written for members not in the metro area touting big plans for state-wide advocacy that would go quiet until your membership needed to be renewed. You probably have a better institutional memory on this but it seemed after the 2009 session they had a diminished visible presence during legislative sessions.