Race walking is no different really than any other kind of racing. If you think too hard about it, just about any race is kindof silly. But we do love to race and it seems to answer some deep human drive.

Even so, walking is fundamentally a slow, often leisurely, activity, and making it into a form of racing seems especially silly, a contradiction. (There's even a "silly walk," for it, after all!)

So it's still a little odd to see that we are hosting the deeply serious Olympic Trials for Race Walking.

And that means some street closures on Wednesday and Thursday. 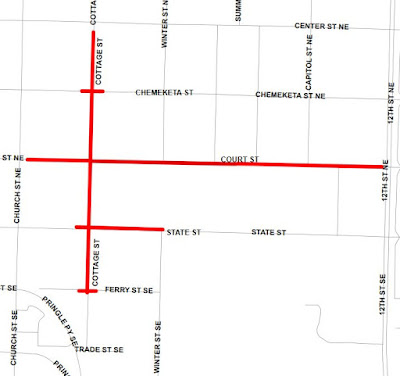 From the City release:

On street parking will not be permitted on Court Street NE and Cottage Street during this period. The race events begin at 10:30 a.m. [Change: 9am because of heat] on Thursday and will last approximately 2 hours. Salem residents are encouraged to watch and cheer on the walkers as they compete for a spot on Team USA.

It's not clear to what extent those on foot and on bike might be able to cross the course. The Winter Street and Chemeketa Street bikeways are both impacted.

For things like this the City needs to have a multi-modal description of closure levels and detours. If the road closures are hard, and include closure to those on foot and on bike, some kind of official detour for non-auto travel is important, especially for those on bike for whom the other downtown streets are underengineered and not very attractive or comfortable.

Hallie Ford is just Down the Street

Don't forget about Hallie Ford Museum of Art at Cottage and State, within the zone of street closures. The Royal Nebeker show has at least a couple of bikey images. In a very easy and direct way I read them in a pairing of loss and joy.

From the show description:


Royal Nebeker (1945-2014) was an accomplished Astoria, Oregon symbolist painter and teacher who created highly personalized narratives based on dreams and memories, often embellished with words and notations that helped drive his narrative. This major retrospective exhibition of Nebeker's paintings and prints has been organized by director John Olbrantz, and features 36 paintings and prints drawn from public and private collections on the West Coast.

Throughout his career, Nebeker focused on the human figure. His work was strongly influenced by the Norwegian painter Edvard Munch, the German Expressionists, and by the Vienna Secessionist artists Gustav Klimt, Egon Schiele and others. Although his early teachers in the United States and Norway encouraged him to embrace the tenets of Abstract Expressionism, he remained first and foremost a figurative artist throughout his life.

There's also a show of Nelson Sandgren's work, seemingly full of mid-century earth tones. (More on it at On the Way.)

Next month a show will open that is already haunting in preview alone:


Russell Childers: Oregon Outsider opens July 30 in the Hallie Ford Museum of Art Study Gallery and continues through October 23, 2016. The exhibition is the first retrospective and largest exhibition to date of the work of self-taught Oregon woodcarver Russell Childers (1915-1998), who spent 38 years institutionalized at Fairview Hospital in Salem.