In the context of discussion on "granny flats," or "accessory dwelling units," a resident of  one of our gridded, close-in neighborhoods said at their last neighborhood meeting:


[I don't] want NEN to absorb more parking and driving problems. Many of the streets are so narrow...with parking on both sides. Large vehicles have a hard time driving through the neighborhood....The city center is compacted [and I am] concerned about the loss of green space.

In this light, a couple of Public Hearing announcements are of minor interest. Both of them involve the relation between density and mobility. One of them is a traditional, car-oriented apartment block complex, the other is a Planned Unit Development more experimental in nature.

The two projects show some of the costs of pushing development out away from the city center out towards the edges of the urban growth boundary and the ways that our high-level goal in the Comprehensive Plan to "decrease reliance on the SOV as the dominant means of travel" is misaligned with our practices in the way we actually conduct development. 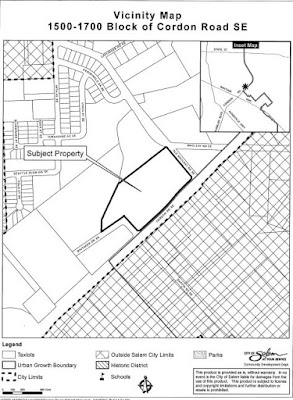 I believe this is for a second phase of a project, and you may remember some sidewalk requirements that had been debated during approvals for an earlier phase.

Just in general terms, this is an utterly car-dependent site, located right on the edge of the Urban Growth Boundary, directly abutting Cordon Road, and remote from anything useful.

If we want to reduce drive-alone trips, development here fails to meet that policy goal.

As you'd expect there's a ton of surface parking. From the application (in the Staff Report)

There's also a new road that is proposed has these wide, radiused curves that will encourage speeding rather than calm driving.


Trying to ameliorate projects like these just seems so pointless. It's not like fiddling with the details is going to make that much of a difference. Even the best sidewalks in the world wouldn't connect to anything useful, and would just be another ornamental emptiness. What is necessary is to change the incentives and high-level policy and development framework that is prior to this level of proposal and plan.

Still, when Public Works offers comment, at least in theory, they must consider how this development will knit into the future urban texture with other adjacent development.

In the Staff Report they suggest a few additional conditions of approval:
5271 Liberty Road South 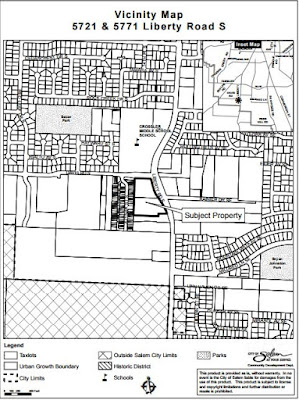 Out south by Crossler Middle School, on Tuesday the 21st, the Planning Commission will consider


A consolidated application to change the comprehensive plan designation and zoning of property located at 5721 and 5771 Liberty Road S to allow development of a 45-unit planned unit development (PUD)/subdivision consisting of 22 duplexes, a convenience service area with managers apartment unit, and common open space.

This site is also very car-dependent and remote from most everything other than the middle school.  At the same time, there are some interesting things going on in the plan.

The application in some ways slides over the car-dependency, and it is a little interesting to read the way it does it:


To the west of the subject property the lands are platted and improved RM-2 subdivisions, with roads, lots, and infrastructure all in place. South of the subject property are large tracts of RA uses. North of Davis Rd. is Crossler Middle School...East and across Liberty Rd. is a large single family subdivision...This area west of Liberty at Davis is therefore an appropriate "planning node" or "multifamily node" around the Davis/Liberty intersection area. This proposed medium density zoning of RM-1 provides a sensible transition between the high density multi-family developments to the west, and the single family development east of Liberty.

City long rang planning has indicated that this intersection of Davis and Liberty is indeed an appropriate location for a neighborhood center or node of activity.

From the Comprehensive Plan for comparison:


The intent of Activity Nodes and Corridors is to encourage development to orient to the pedestrian, and provide accessibility to transit services, major roads, and connectivity with the surrounding neighborhood, while accommodating the use of the automobile.

The language is significantly different, "planning node" vs. "activity node," but it seems like the proposed project is trying to trade creatively on the concept of "node" we have formalized in the Comprehensive Plan.

Though there does not exist a formally recognized "node" here. the more interesting thing may be the potential for a "neighborhood center" idea. And in fact the Convenience Center that is proposed would have a teeny bit of retail:


The existing residence is proposed to accommodate the Rental Office, and two small commercial spaces...This allows a small tea or coffee shop and a beauty shop.

With the school and with the distance to Commercial St or to the Liberty/Skyline intersection, it could make sense to have a neighborhood-scaled commercial node here. So even though current zoning does not support this, it's an interesting and potentially fruitful direction.

Maybe a development like this could initiate rezoning some nearby land for a real neighborhood center with a corner store and the full deal. (Though it is not certain there actually exists nearby an appropriate block of undeveloped land that would be available even in theory.)

One problem with the proposal, though, is the form of the proposed duplexes. They're awfully snouty. They lead with the garage, which constitutes well over half of the front elevation.

To avoid this, it would be great for more developers to consider the alley revival going on with the Fairview Addition development of Eric Olsen. This allows for a foot-oriented and social front elevation that greets the street, often with a porch, and a utility elevation with car access and storage in the back.


There are many Oregon White Oaks on the property and the goal is to save as many as possible. Therefore the building and road layout is determined by the location of the existing trees.

Additionally, there might not be room to deploy the housing with alley-oriented car access and center-facing porches on a path system and courtyard. Relocating the ring driveway farther out to the edges might reduce the amount of housing possible on the interior of the lot.

There's a balancing act with trade-offs going on, but even though this site at present is not very walkable in relation to external destinations, the proposed development internally still looks backwards to 20th century standards rather than forward to more walkable 21st century types.

It would be interesting to see if another round of design refinement could reduce the snoutiness of the duplexes and make it a little more walkable while also preserving a meaningful cluster of trees. Especially if the idea of a neighborhood center has traction, reshaping the duplexes in a more walkable configuration would orient them more fully to that center.

To return to the NEN meeting and concerns about absorbing parking and driving problems, if new density we add close-in is totally car-oriented, that could certainly be a problem. The key is that infill needs to be low- and no-car oriented for walk/bike/bus mobility. We can handle more people and more density if we use the smaller geometries of walking, biking, and busing. Better adjacencies with neighborhood-scaled businesses will also make it easier to subsitute walk/bike/bus trips for car trips. Both current and new residents will be able to make fewer car trips.

But if we push all of our density and growth out to the edges, it is certain to be excessively autoist, and the vicious, self-consuming cycle of parking and traffic will intensify.
Finally, two footnotes.

The PUD may be at present the only authorized mechanism in Salem by which to construct examples of the "missing middle." An inventory of all the PUDs with a toolbox of successful design elements and perhaps an assessment of unsuccessful elements could be useful. Combined with an inventory of our pre-zoning courtyard apartments and bungalow courts, it might be that there's more resources for modest density that we would otherwise think.

And does this type of three-story, wood-framed apartment block have a name? There must be an industry name for this kind of thing, right? It's completely generic. This cookie-cutter form is all over Salem and the region. So what is it called?
Posted by Salem Breakfast on Bikes at 8:30 AM

I hear the three-story apartment complex commonly referred to as a "Three-Story Walk-UP". "Walk-UP" because there is no elevator and you typically access each floor via an exterior stair.

Interesting. When I hear "walkup," I think something very urban. You know, Manhattanites talk about "walkups." So I was thinking this car-oriented form would be distinguished from that. Thanks!

I call them ugly pods. I don't care how much flair they add their still ugly pods. The design should follow traditional 4-plex to apartments like the brick building across from the Salem Saturday Market. There should be nothing like the typical building surrounded by parking. It should resemble a street grid pattern.

And "walk-up" means Exactly as you describe not these disasters.