Because of the winter storm earlier this month, the City's Open House on a strategic planning process was postponed until January 31st.

At least from here the whole thing has seemed a little strange. If Council authorized it, we all missed it. If Council didn't authorize it, it's being funded by some secret slush fund! It probably originates in the City Manager's office rather than from Council. That doesn't mean it's a bad thing, but it's just a little odd. Usually these kinds of things go before Council first.

Significantly, notes from the November SCAN meeting appear to confirm its origin in the City Manager's office:

So why is it such a secret?

The project's description, too, has seemed murky, with a lesser instance of word salad:


The City of Salem is undertaking a strategic plan to articulate the mission, vision, values, and goals for the organization to help the City sustain delivery of core services as the community and the organization grow and change.

Anyway, they've conducted some of the proverbial "stakeholder interviews" and also a phone survey. (SCV has some video here from earlier in the process.)

A reader sent along a copy of the phone survey results, and there are some interesting findings in it.

Unfortunately, the City has created no project website or document library for it. (When this is remedied, this post will be updated with links as appropriate. Update: Here it is!)

Let's start with the "most important issue."

While in aggregate, transportation-related things rank high, the Salem River Crossing itself is not very important, it turns out! (Though of course it is a little dispiriting to see "public transportation" ranked equally as "most important.") "Homelessness" and "housing" are both more important. Elsewhere, "maintenance" seemed clearly to be more important than new roads like the Salem River Crossing. ("Fix it first!") 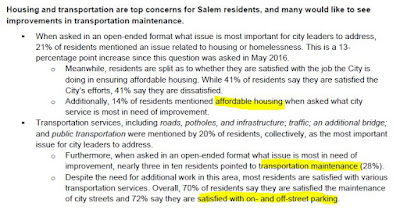 It was good also to see "walkable neighborhoods" get some love.

Drilling into detail, there were some interesting findings also. Parking seems to be less of a problem than you might think.

At the same time, it is surprising how easy people apparently find walking and biking. It may be that the question should have been separated into two, one on walking and one on biking. And people should have been asked how often they undertake these activities themselves. Walking in Salem is significantly easier than biking, and lumping them together might conceal more than it reveals. The findings may also represent the opinions of people in cars who think that there might already be too many bike lanes or sidewalks. These "satisfaction" ratings seem very coarsely grained and insufficiently nuanced. 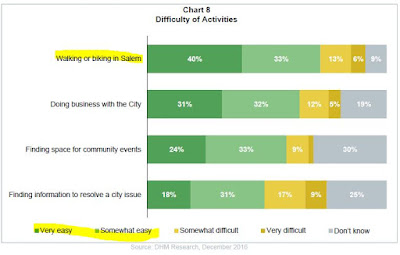 People groused about congestion of course. 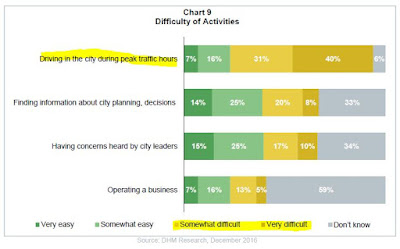 The sentiment in favor of "placing housing near City Center" may not square with protest over the project for the North Campus of the State Hospital. This is a question where assent in general probably breaks down with more NIMBYism on specific locations. Again, the questions might be too coarsely framed to yield actionable information. 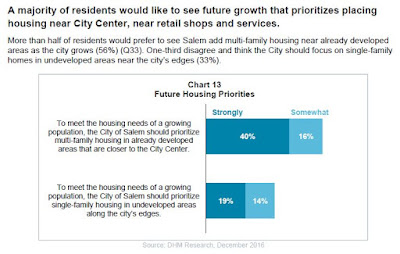 It is interesting that a substantial chunk prefer our Euclidean Zoning scheme for sort-and-separate uses.

Finally, a there is a hidden autoist bias in a question that is formulated  to express feelings on "the cars that will inevitably come as Salem grows."

Car use is not inevitable! It is the result of policy and funding that encourages car use - things like "free parking," levels of service analysis that dictate road and intersection widening, and zoning that makes things distant and creates car-dependent neighborhoods. We heavily incent car use. There is nothing "natural" or "inevitable" about our patterns of driving. Survey language like this hides this system and all the direct and indirect effort that goes into maintaining it. 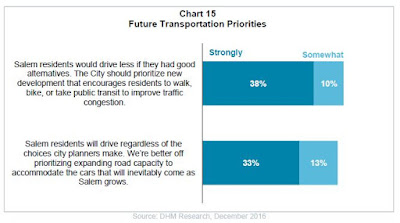 In our public debate earlier this year about Creekside and irrigators, we could talk about water because water use is priced.

But when we want to talk about transportation use, because there is a huge and hidden subsidy for driving, and there insufficient direct pricing for driving and road use, we are not able to have a good conversation about road capacity and accurately matching supply of roads with demand for road capacity.

With a better correspondence between pricing and road use, we might have different conclusions about expanding road capacity. Fix-it First would be even more obvious. Tolling and priced parking could also be part of this, but currently people insist on the subsidies. Raising the gas tax is very unpopular.

Strong Towns has also developed a similar (but not identical) analysis of the "growth ponzi scheme."

While it is good for the City to get information on these general values, the observations and feelings are all untethered from budgetary realities, and may operate more as sentiment and slogan than as actionable priorities for a city government. Hopefully they will be developed in more detail and linked to the city budget process where we all have to grapple with the realities of efficiency and trade-offs. If this is but a preliminary stage for more refinement, then it could be very useful.

Maybe more will be clear at the Open House later this month. 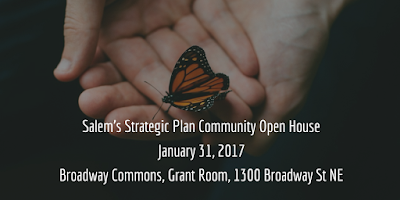 Before the Open House there will also be a charrette by invitation only for those "stakeholders." Again, the public statement about it is minor word salad:


This work will chart a course, in a transition plan, for the City moving forward based on findings from an assessment of current conditions in our community, impacts of anticipated change in the region, and perspectives of residents, community leaders and elected officials.

Hopefully the Plan will in the end result in real action, not merely a lovely shelf study that "charts a course in a transition plan for the city moving forward."

"At least from here the whole thing has seemed a little strange. If Council authorized it, we all missed it."

It was discussed at length at the November 16 Budget Committee meeting -- because the perceived need for the SP is as a tool for the budgeting process, which is not surprising to anyone who's ever watched the "wish list" formed and/or its projects funded according to who shows up at meetings.

It remains surprising that there was no Staff Report, even as "information only," for Council on this project.

This is something of a free-floating, autonomous project, and it curious in that way!

Thanks for the additional info!

Thank you! Updated the text with some of the links. I'd searched for this the other day and either failed badly on the googling, or the City just created the page and posted the document. Glad you found it.

Having reviewed the survey results, there seems to be no mention of how many were contacted in order to get 450 responses. 450 respondents out of how many?

I usually decline to participate in phone surveys, because it's usually vague as to who has commissioned the survey and for what purpose. If I'm going to donate (or possibly waste) 20 minutes of my life to a stranger on the phone, I'd like to know who will use the info and how. I don't trust spin doctors, and I'm not interested in donating my time to helping an unknown political agenda or to sell products.

From those surveys which I HAVE participated in, political agendas have often shown in the questions asked and in the phrasing. So I usually decline. Ironically, I may have declined on this very survey.