December's storm postponed consideration of the storefront restoration project for the Engelberg Antiks building last month. It's on the agenda for the Historic Landmarks Commission this month. (The agenda and Staff Report's not up yet, however. Here's the Notice.)

The building remains a small source of fascination, and it is poorly documented in our downtown Historic District. There is a photo from the 1930s or 1940s, but it has not been dated. We can now date it to no earlier than 1938. The local story of Fred Meyer here and of the building itself is a little interesting, and with the help of some additional research by a blog reader (thank you!), maybe we can start to flesh out more of it. Some of it is secure, some is more conjectural. The outlines seem clear but you might be surprised how windy and braided are some of the details!

Here's an annotated clip from the 1926 Sanborn Fire Map for the half block on the east side of Liberty Street between State and Court. In the upper left is the newly restored McGilchrist and Roth block. The Book Bin's building is on the right. The old Fred Meyer is addressed on it as 140 N. Liberty, but today we use 148 Liberty NE.

The Historic District uses a date of 1915 for construction, but in tentative way I want instead to propose 1908.

There is an announcement in September of 1908 for a new building and opening of "Ye Liberty" Theater.

Unfortunately for us, Salem was a small town, and it was not necessary to give any addresses! People knew how to find stuff.

Shortly thereafter, in 1910, notice about a business in the Roth building next door confirms the location of Ye Liberty Theater.

If the building was constructed in 1908, seems unlikely it was torn down and a new building erected in 1915 or shortly thereafter. (But we can't rule this out, it's true.)

In any case, they were still showing movies there into the 1920s.

Now we turn our attention to another block for a moment.
Another small source of fascination is the question of how much of the original "White Corner" of 1874 still exists under the moderne remodel where Shyrocks has operated on the southeast corner of Commercial and Court.

As you can see from the photo, which seems securely dated from 1938, the exterior facade was still intact.

In the corner storefront was the Byrnes store, an early department store.

After the fire, Fred Meyer, "manager of Byrnes, Inc." took out a lease for the "old telephone building," which you can see on the Sanborn map as the "telegraph" office.

As a result of the store move, the name was also changed. "The store will reopen...under the name of Fred Meyer, Inc."

And so in late April of 1932, Byrne's starts advertising as Fred Meyer, and it seems nearly certain that this store, at 170 N. Liberty, was Salem's first Fred Meyer.

After a few years, in 1938 there is a "close out" sale for the Metropolitan Store at 148 N. Liberty just down the street.

At about the same time it appears Fred Meyer closed the store at 170 N. Liberty and moved in to 140 N. Liberty. (The Metropolitan also moved or reopened, but that's a totally different story, and involves new building construction in the 1940s, I think.)

We might come back to this, as the story of these chain department/grocery stores is also an important story about autoism and our development patterns. It would be interesting to learn more about when Fred Meyer closed this store and moved out of downtown for good. There are also some other interesting Portland connections that might be worth exploring.

In the mean time, even if we can't be certain yet that under the building are parts of the original 1908 Ye Liberty Theater, we can be reasonably certain about the movements downtown of what became Fred Meyer. And we can be sure that the proposed remodel is not to original conditions, but is itself to a second-order remodel from the time Fred Meyer moved in. (Update: It closed in 1956. See addendum below.)

Here we go. There's a "Remember when" Salem nostalgia facebook group, and one of its members posted an uncredited scan from a picture book or something. They identified it as from 1918.

We can tie it exactly to a date range.

So that looks like strong evidence that under the Engelberg Antiks building are the vestiges, maybe the last remaining in fact, of a very early movie theater in Salem!

Just down the street, and involving a different old storefront and chain, the paper had images of the demolition of the old Safeway at 245 Court this past week. It had been remodeled quite a bit already, and while it is a small loss, and a little disappointing that the shell could not be used for the new storefronts, it is not a great loss. Its replacement will be terrific.

Yesterday in the Sunday paper there was a history column about the theater! 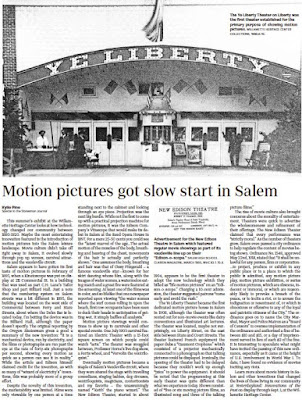 
obscene, indecent or immoral, or which are reasonably likely to provoke a breach of the peace, or to incite a riot, or to arouse the indignation or resentment of, or which is obnoxious or offensive to any of the loyal and patriotic citizens of the City.

That goes with the 1918 ban on street carnivals.

In a piece on the 50th anniversary of an employee, the SJ says:


The company, after a 12-year absence in town, opened supercenters on Commercial Street SE and Broadway Street NE the same November day in 1968.

A downtown Fred Meyer, on Liberty Street NE across from the Reed Opera House, closed in 1956 when it ran out of room for expansion.

But a companion video piece misidentifies the 148/140 Liberty St storefront at the first 170 Liberty St one.

Here's a note on the end of the run as a movie theater, and the conversion to retail.

Oops! I forgot that there's a picture of Ye Liberty, not very well reproduced unfortunately, in the Salem Library Historic Photo Collections. It is identified as at 170 N. Commercial rather than 140 N. Liberty. But this seems unlikely at the moment and probably the result of something garbled.

Updated with a better photo, securely dated, of the theater next to the Roth building.

And it turns out that photo is from the State Library's collection, so the image is now properly credited. Here's a much smaller and inferior image from straight-on.

140 N Liberty must have become 160 N Liberty, no? On the backside of the Hughes-Durbin building (aka The Metropolitan) you can see the remnants of an old Fred Meyer decal on the brick.

At the moment, though, I do not think that 140 became 160. It's clear that there's a relation between 140 and 148, but the Hughes-Durbin buillding had Penney's, not Fred Meyer. Here's a photo of that. According to the Downtown Historic District information, "The original Hughes-Durbin Building was built in 1916 at this location. It was a two-story brick building. This building appears to have been constructed c. 1945 and although remnants of the original building may remain, the materials, design and overall appearance changed so drastically it is considered to have been constructed in the 1940s." The photo shows that original two-story brick configuration, not the later configuration we know as the Metropolitan building. ("Limousine Life" was showing the the Liberty Theater in March of 1918, so that's a likely date for the photo.)

Probably the ghost sign is just advertising for Fred Meyer at 140 N. Liberty.

Ahh, that makes sense. I'll try to get a good picture of the ghost sign.

Maybe Anon/Unknown posted the photo to Reddit the other day?

Added notes on the closure from 1956 - 1968 as well as a misidentified storefront.

Added dates for the shift to retail.