The Policy Committee for our local Metropolitan Planning Organization meets on Tuesday the 24th, and it looks like they have a draft project list for an important 2018-2023 funding cycle. (Agenda and packet here.)

But First, at the Oregon Transportation Commission

One of the projects that was initially considered for this 2018-2023 cycle, but was later split off and instead added to the current 2015-2020 cycle as an amendment, is a study for seismic retrofitting the Center Street Bridge.

Over at N3B you might have seen a terrific note about Councilor Andersen testifying before the Oregon Transportation Commission in favor of it. Formal approval for the project was on the consent calendar for the OTC, so it's not like was in danger and needed much lobbying. Instead, what Councilor Andersen did was show conviction and support from a Salem Elected - not just one of the rabble-rousers! - and give visibility to the fact that the Salem River Crossing project is in trouble and does not conform to higher-level policy goals - like "Fix it First" or reducing drive-alone trips. Hitherto communications on this topic have risen up to the OTC through the MPO and our area ACT from Mayor Peterson and Councilor Lewis, cheerleaders for the Salem River Crossing. So Councilor Andersen's comments were a strong counterpoint from within government. Thanks, Councilor Andersen!

Worth a little digression, I suppose, is that ODOT Director Garrett, shown smiling in the middle of the photo, is increasingly attracting criticism from the OTC.

The other day the Portland Tribune posted an article on the OTC and problems with its relation to the Oregon Department of Transportation, which ostensibly it supervises as its "Board of Directors." 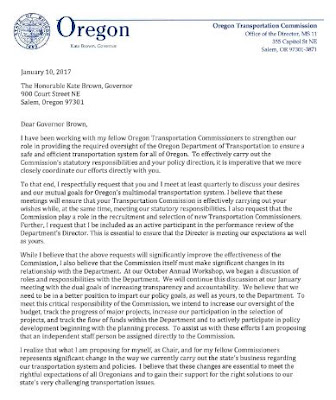 In her letter to Governor Brown, OTC Chair Tammy Baney asks to "play a role in the recruitment and selection of new Transportation Commissioners," to be "an active participant in the performance review of the Department's Director," and calls for "significant changes in [the OTC's] relationship with the Department." 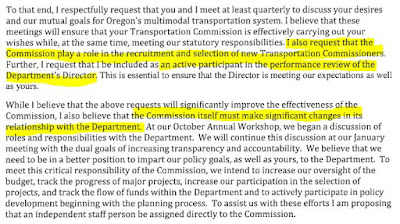 In comments to the Tribune on the letter, critics and analysts confirmed its significance:


"Wow," said Catherine Mater, who held Baney's position until 2015 [when Governor Kitzhaber fired her for opposing a coal project], as the letter was read to her over the phone. Considering that ODOT staff ostensibly work for the commission, Mater said the request for an independent staffer indicates "a complete disintegration of trust" between ODOT and the commission tasked with overseeing it.

David Bragdon, former president of greater Portland's Metro regional government, has closely watched ODOT for years. The letter "reads like a vote of no confidence in (ODOT) management," said Bragdon, who is executive director of Transit Center, Inc, a nonprofit.

"This is a pretty darn amazing letter," said Jim Moore, a Pacfiic University government professor who leads the Tom McCall Center for Policy Innovation. The fact that it was put on official letterhead suggests it was meant "for a wider audience and that the letter was intended to put pressure on the governor," he said.

Somewhat later Baney appeared to walk it back a little, not wanting perhaps to make public the full extent of her displeasure or concerns, but it seems clear that there is increasing skepticism about ODOT and its leadership.

There's a large audit of ODOT that's supposed to come out any moment now, and its findings for Legislators will have a great impact on what any "transportation package" might look like in this session.

So that's something to keep in the back of your mind if you aren't following these things already.

The minutes from November contain more evidence that Cherriots should not be afraid to be more assertive. 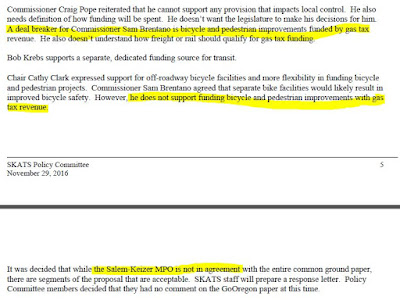 SKATS officially operates by "consensus" and requires a unanimous vote on policy actions. As they were discussing jointly endorsing a policy paper and proposal for 2017 Legislation by the Oregon Consortium of MPOs, one member of the Committee said that funding walking and biking was a problem:

The end result was fragmentary:


It was decided that while the Salem-Keizer MPO is not in agreement with the entire common ground paper, there are segments of the proposal that are acceptable.

Without need for unanimity, there might have been a chance for a stronger endorsement.

In any case, this is an example of how Cherriots' "playing nice" might lead to sub-optimal outcomes, and how a harder negotiating stance on things like the Salem River Crossing, as they now seem to be doing, might yield in some cases better outcomes for the community.

Members of the Salem 350.org chapter also attended the meeting and the Greenhouse Gas Targets Workshop held after the meeting proper. Several members of the Policy Committee reiterated skepticism about greenhouse gas reduction efforts. That continues to be an uphill slog.

Back to the current meeting and agenda, mostly it's housekeeping kinds of things.

It looks like a final draft list for the 2018-2023 cycle is almost ready to go out to the public formally for comment.
As a result of some new Congestion Management Air Quality funds (see here and here), items 10-12 were added or expanded: The scope on McGilchrist went from just 23rd-25th to 12th-25th; the Cherriots technology upgrade/replacement added some new components; and the Lancaster project is wholly new. Some of the others have had slight adjustments to the estimate.

So barring any major new developments, the Committee will approve this list, the formal document will be prepared for the February meeting, with public comment in March and April, and adoption in April and May.

From here there is reason to be pleased about:
I am doubtful about the Keizer and Kuebler/Cordon studies, as they look to be pretty autoist, but "there's a chance," as they say, they might offer some incremental improvements without being transformative.

The annual Work Program is also on the agenda, but I don't think there is more to say beyond the notes for the Technical Advisory Committee meeting earlier this month.

SKATS Policy Committee meets Tuesday the 24th at noon. SKATS is at 100 High St. SE, Suite 200, above Andaluz Kitchen and Table Five 08.
Posted by Salem Breakfast on Bikes at 12:01 PM