Urban Freight Corridors and the CMAQ Bonus at the MPO

The Technical Advisory Committee for our Metropolitan Planning Organization meets today, Tuesday the 10th, and there are several items of interest. 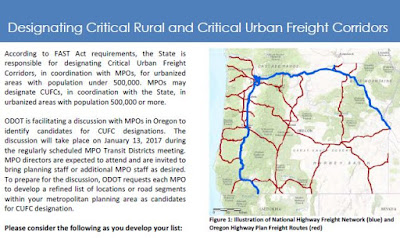 At the top of the agenda is something that always seems a little dicey for people interested in walking and biking. The new Federal Transportation law includes something called "Critical Urban Freight Corridors." The magic of, and need for, free-flowing "freight" is constantly invoked to justify hydraulic autoism: Road widening for those in cars and trucks, and second-class facilities on the margins (or not at all) for people walking, biking, or busing.


At the December TAC meeting, there was a short discussion of the Critical Urban Freight Corridors (CUFCs) that ODOT will be defining in Oregon in consultation with the MPOs. ODOT is hosting a workshop on CUFC selection on January 20, 2017. A finalized list will be developed by ODOT by February for submittal to FHWA and inclusion in the update to the Oregon Freight Plan....

The last two federal surface transportation funding acts, MAP-21 (Moving Ahead for Progress in the 21st Century) and FAST (Fixing America’s Surface Transportation), have increased the focus on freight and related issues. This increased focus has led to additional requirements that DOTs and MPOs must address when developing their long-range plan and short-term funding program. Part of this focus is to define Critical Urban Freight Corridors (CUFC) in each state. During the next two months, ODOT and the MPOs will identify 77.53 miles of roads statewide to be designated as a CUFC. Separately, ODOT will also identify 155.06 miles of roads statewide as Critical Rural Freight Corridor (CRFC). Designation, once submitted and approved by FHWA, will allow eligible projects on these roads to apply for National Highway Freight Program (NHFP) funding, which is anticipated to amount to $73.5 million available within Oregon through 2020.

Several candidates for CUFC designation are listed in a table, and here are some that seem particularly worth attention:
Others, like Cordon Road and Kuebler Boulevard, seemed obvious and relatively unproblematic.

Right now there is talk in the emergency response world about smaller fire trucks for the urban environment. As our templates for street design increasingly recognize the benefits for safety and comfort of narrower lanes, our largest fire trucks may not be able to negotiate these streets.

One approach is to say, no we need wide streets and large radius turns. Make the streets and urban form match the requirements of large trucks.

Another is to say, maybe we need smaller and more nimble trucks. Make the trucks match the urban form. And reduce the number of competing cars on the roads rather than widening the road for more cars.

UPS experimented with a bike trike in Portland this past year, for example. But the conversation about freight and urban mobility still has seemed to default to a roto-router and dredging mode: We got to widen the road.

It's hard to say where this CUFC designation will go in Salem, but it's something worth watching, especially if it becomes a reason to say "there's no room for bike lanes now."


The regional planning work to be conducted in the MPO region by SKATS, ODOT, local jurisdictions, and the Transit District over the next state fiscal year (July 1, 2017 – June 30, 2018) are described in it.

One of the projects is traffic projections: 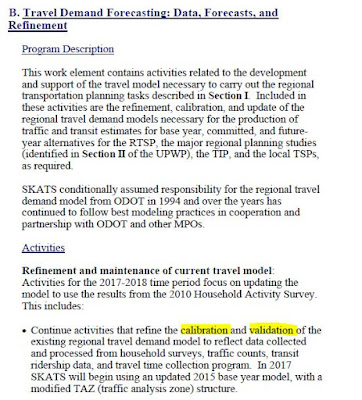 So far all of the "calibration" and "validation" has been conducted internally, but as we have seen with regard to traffic forecasting circa 1980, the track record is lousy.

It would be helpful for SKATS to publish more on the calibration and validation process, and to make fully public ways that our traffic forecasting has been accurate and inaccurate. Even inside of the assumptions of hydraulic autoism, right now there is no formal mechanism to assess road projects success against forecasted traffic volumes ten, 20, 30 years after completion. We might as well be using sheep livers in our traffic divination for as much as we look back to any actuals for empirical validation!

There's more on the delay of the South Salem Transit Center for Cherriots:


Due to project interruption caused by staffing changes, progress on the South Salem Transit Center (SSTC) has been slowed temporarily. In order to accelerate the completion of this project, a project management firm will be hired to manage all capital projects for SAMTD. The firm will have adequate resources to manage multiple projects simultaneously, without negatively affecting the project schedule.

There continues to be murky references to ways that the SRC is actually forecasted to fail to do what it says it is going to do:


An activity not in WOC#4 [???], but related to the outcome of the River Crossing study, is the likely need to develop Alternative Mobility Targets for sections of statewide facilities that cannot meet the mobility standards of the ODOT Highway Plan. ODOT will take the lead on this task with SKATS staff assisting. (See separate activity description below for more information.) [italics added]

Curiously, the draft Work Plan doesn't seem to have a separate "activity description" for the Alternative Mobility Targets.

What to do with the CMAQ Bonus?

In last month's minutes there was an interesting bit about the unexpected bonus of Congestion Management Air Quality funds (previous discussion here):


It was noted that Policy Committee Chair Cathy Clark suggested that CMAQ funds could assist in finishing up sidewalk projects on the regional system. Transit projects and needs included on the list enclosed in the agenda packet were also discussed. Ms. Odenthal encouraged TAC members to provide guidance to staff.

TAC members discussed the diverse priorities held by SKATS Policy Committee members. Safety has historically been a high priority to the majority of members while alternative modes of transportation are not necessarily as high a priority to some members as it is to other members.

Mostly, though, the proposals for the CMAQ funds are not very transformative. The Technical Advisory Committee members are being asked to prioritize this list. Several are ones that missed the cut for the "regular" part of the 2018-2023 Federal funds. They are valuable, second-tier kinds of projects that are in search of funding.
Throwing it all at transit might have the most direct benefit for air quality. But Lancaster's all effed-up, and that might be a worthy project as well, even if it is just remediation to basic late 20th century standards. The interconnects seem like the most retrograde, oriented towards free-flow and induced demand rather than alternatives to driving.

SKATS Technical Advisory Committee meets Tuesday the 10th at 1:30pm. SKATS is at 100 High St. SE, Suite 200, above Andaluz Kitchen and Table Five 08.
Posted by Salem Breakfast on Bikes at 7:00 AM

We should not use the shortened "Critical Urban Freight Corridors" version, we should use its proper full name: