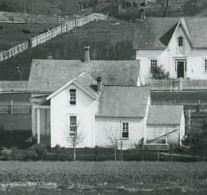 It's Black History Month, and yesterday the Oregon Encyclopedia tweeted out a link to a locally relevant article, "Salem's Colored School and Little Central."

The story is little known and it's not possible at this point to retell it often enough.

So check it out!

(And while you're at it, consider more generally reading about post-Civil War Reconstruction and its shameful counterpoint and sequel in Redemption. Some historians and social critics have argued persuasively that we are entering a second phase of "Redemption," a reaction to the Civil Rights and Obama eras, and it will take hard work to baffle it.)

Supporting the OE article are some photos.

And the caption to one of them - which doesn't actually seem to have very much to do at all with supporting any point in the article! - solves a mystery in the Salem Library Historic Photos collection.

A different print of this same photo is in the Salem collection and it has been identified as "View down 12th Street in Salem, Oregon, from roof of old East School, 1886." This description was very difficult to square with the image, as there is no street in the photo that really looks like 12th, but the OHS caption identifying it as looking down Marion Street makes perfect sense.

And a little thrillingly, the house at the center (in detail at top of post), across the street from the gothicky house, looks to be the same one that remains today at 14th and Marion! Over at the Discover blog, Virginia Green calls it the Hayden House.

Probably a little more research would be necessary to button down this identity with 100% confidence, but for our armchair purposes here we're pretty sure.

At any rate, it's nice to be able to identify a photo of an outer Salem neighborhood (at that time anyway!) that is not downtown.
Posted by Salem Breakfast on Bikes at 12:01 PM

For a little more on East School, which was replaced by the Safeway on Center Street between 12th and 13th, see here. (And still more on Safeways here.)