Italianate Smith-Ohmart House of 1870 up for Historic Design Review

One of the most important historic houses in Salem had been for sale for while, and it looks like it might have recently sold. The City just posted a hearing notice for a "Major Historic Design Review."

Based on a quick reading of the Notice, the details of the current proposed remodel for the Smith-Ohmart house of 1870 don't look to disturb the "big picture" of a remodel that already significantly impacted and altered the original Italianate home. So to say the proposal is worth attention is not to say that it should be opposed.

It is instead to say that it is an occasion to notice an underappreciated historic home in Salem.

The proposed remodel is for changes to a backside gable that was bolted onto the squarish Italianate main body of the house.

The National Register listing does not say when the gable was added. Stylistically, it doesn't seem integral; the two bits aren't really very harmonious. The center window just below the peak is quite narrow, however, and the chimney looks old also, so maybe the addition is older than you might think considering the disjunction in style. There might be an interesting story about that - and maybe the Staff Report for the Hearing will uncover or discuss some of this.

(For an extensive gallery of images, see this zillow listing. The National Register Nomination, from 1979, is relatively thinner unfortunately than current Nominations seem to be. I don't know if this says more about increased research today or about a kind of inflationary pressure on claims for significance in nominations.)

In any case, the history of the family is foundational for Salem. From the Nomination (again in 1979):


The Italian Bracketted farmhouse built about 1870 for Fabritus Smith, Oregon Trail pioneer of 1846 and state legislator, predates by several years the Italianate house of Asahel Bush, a National Register property and best-known of historic homes in Salem. The former property--one of the earliest developed in all of South Salem--is comfortably buffered by its oak and evergreen-shaded yard atop a knoll. For 73 years, it was the "home place" for the families of Fabritus R. Smith, his daughter Velleda Smith (Mrs. Adam Ohmart), and the patriarch's grandson, Roy V. Ohmart. Inevitably, the city grew out to encompass the Smith claim, and the house is now the barrier between strip development along South Commercial Street, route of the old Pacific Highway, on the west, and a residential neighborhood east of the house which was developed between the 1920s and the Post War period on land sold off from the original claim. The Smith-Ohmart House is significant to Salem as a well-preserved example of the Italian Bracketted Style in which the main volume is virtually unaltered. It is significant also for its association with Fabritus Smith and his family who were its occupants for nearly three-quarters of a century.

The Smith-Ohmart House was the third farm home of successful farmer Fabritus R. Smith on his Donation Land Claim of 635 acres. The first, a log cabin built in 1849, stood over a mile away on the east edge of the property near the only road to the south, now 12th Street SE. The second--a frame house, built in the early 1850s--stood a few yards west of the present house and was lost to fire.

For many years, Fabritus Smith served as Vice-President of the Board of Trustees of Willaimette University. His first wife, Virginia Pringle Smith [usually Virgilia] taught at the first school in Salem, outside of the University and its Academy, and her grandmother [Tabitha Moffat Brown, buried in Pioneer Cemetery] is credited with founding Pacific University at Forest Grove. Other members of the family who have resided in the house have also been teachers.

As the third farmhouse, the house represents the growing prosperity of an agricultural family who came over the Oregon Trail in 1846, the consumation of the dream which inspired that first large migration to Oregon. Fabritus, a native of Rochester, New York, earned his way to Oregon by driving an ox team and wagon for Joseph Waldo. His wife, Virginia Pringle, came with her family by the disasterous southern route and arrived in Salem barefooted and sodden by rain and snow on Christmas Day, 1846, when Fabritus first saw her outside the Jason Lee House, where he boarded. Some of their children married into other pioneer families.

Fabritus served two terms in the Oregon legislature in 1876 and 1878. He also served on the local school board. Other family members have also served in similar capacities. Fabritus was also coroner for Marion County in 1866.


They really hollowed out the hillside to create a level lot for what is now Withnell Dodge. According to Duniway this was done in 1929 or so.

In the form of venerable trees, some remnants of the original oak savannah might still be around on the top of the hill.

Between the car dealerships, other strip development along Commercial, and McKinley school, as well as the other early- and mid-20th century residential development, the early landscape is hard to read. Among all these, the Smith-Ohmart House really stands out - even if it is also a little hidden! - as link to the early statehood period.

If you've never walked by it, you can catch your own glimpses along Ohmart Street looking south, and at the driveway off East Nob Hill. Unfortunately a hedge blocks most of the view, though.

The Staff Report is out, recommends approval, and there doesn't seem to be anything more to say on that - any dissent will mostly be fussing or debating on details.

The backside gable addition is from before 1920, and modified two more times it seems, but not much more is known about its first stage. The explanatory narrative from the applicant agrees it is non-original, but there doesn't seem to be any documentary evidence to confirm that.

The Sanborn Fire Maps are maybe a little more interesting. 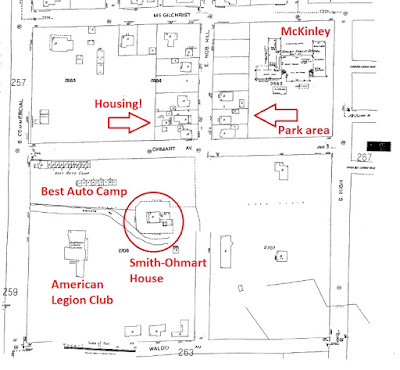 Here's the clip from the 1950 iteration (the 1926/27 base map, with updates manually pasted over the base map; you can see a seam on the section of East Nob Hill Street right by the house).

The housing where McKinley Park is today, the auto camp, and the American Legion Club are all features from the none-too-distant past. So they were interesting to learn about.

Yesterday in the paper was the obituary for Robert Ohmart, the baby in the photo of the four generations.

Updated with Sanborn Fire map and a few additional comments.

Added a note on the passing of Robert Ohmart.

I just came across your latest post. Bob Ohmart was my dad. I can't tell you how much it meant to me that you made the connection to the four generation photo when coming across his obituary. I happened to have printed out your blog on the Smith-Ohmart house to show him just a few months before his passing. He was so pleased to see it. Thank you again for acknowledging him and keeping this piece of Salem history alive.