In the Neighborhoods next Week: West Salem and Downtown

The West Salem Neighborhood Association meets on Monday, and they have several items of interest on the agenda.

A little worrisome is a potential 2017 goal:
A bridge over Wallace Road sounds great, right, so why is it worrisome?

Because of a new location and the way it is framed up as "a way to help traffic flow."

The project, proposed as an alternative to the Second Street undercrossing, may be an answer to the question, "how can we get people on bike and on foot out of the way?" and not an answer to the question, "what do people on foot and on bike need in order to bike and walk more?" The proposal looks to be a pedestrian displacement system more than anything else. [clarification added]

In the notes to the previous meeting they said


[A neighbor] is working on the design for a bicycle/pedestrian bridge beside Highway 22 over Wallace Road NW at the Edgewater intersection. The bridge would provide a connection between the existing bike/pedestrian path from the Marion and Center Street bridges to the path along the south side of Edgewater Street. The Land Use Committee will meet with ODOT representative Sheila Lyons and Ward 1 City Councilor Kara Kaser February 16 and 17 to discuss ways to move this project forward.

The problems here:
The idea's genesis here seems more than a little autoist and therefore unhelpful.

Right now a crossing at Second Street along the railroad alignment still looks most useful.

In the 2017 goals there's also desire to 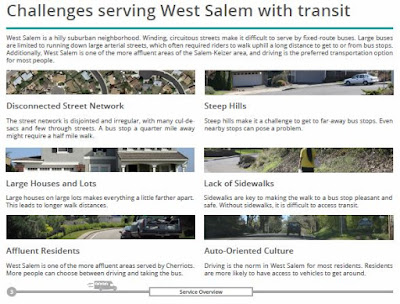 This is great, but when they redesigned the Cherriots service map a couple years ago, they took out several lines in West Salem because they were not popular and performed badly. The new "flexible transit" service hasn't been very popular either, and when they assessed the reasons why, they came up with a number of structural problems in West Salem.

Better transit in West Salem isn't just a matter of scheduling (and funding) more buses. It may be that quality transit in West Salem is not possible until the cost of making car trips is more accurately priced, with less or no subsidy, and the trade-offs are on an even playing field. This could mean there are tolls on the bridges or congestion pricing as well as priced parking downtown - things currently many Salemites vehemently oppose.

Briefly, in the CANDO minutes (archived here) for last month is a note about


a new memory care and independent living facility being planned for 901 Front Street NE along the Willamette River. The plan calls for the 2-building, 98,000 sf facility, which will require a conditional use permit, to replace warehouses on 3.88 acres and be oriented toward the river. The plan also includes some form of public right of way along the river on the west side of the facility, and from Front Street to the river along Mill Creek. The board was generally receptive to the plan as presented.

On balance that seems like it will benefit the area! The connectivity along the river and creek is nice, and this area has languished with vacant buildings for some time. So even if a nursing home isn't the most vibrant use of the land, it will definitely create more life than is there now.

(Also, if you haven't been reading it, they've got an extensive series going on various efforts to work on the constellation of problems around homelessness. Most recently they pivoted from criticism of the Task Force to something much more positive with "Mayor Announces Ambitious Plan for Chronic Homeless." If you have an interest in this topic, this is by far the best analysis on it in any media here.)

I'm confused. Why is a bike/ped bridge over Wallace Road needed if the city is planning an undercrossing at that same location?

This is being proposed as an alternative to the undercrossing, as I read it. Sorry about that. I will revise the text to be clearer.