A Trio of Classical Revival Houses and the Pineconian Order

A while back on a trip to Eugene, there was a magnificent discovery: A terrific guide knew of a settlement-era house that pre-dated Statehood and was still on its original site.

The Masterson House of 1857 has been remodeled some, but the basic form of the original Classical Revival house is visible and intact. It's hardly even a slant-rhyme compared to those other houses - it's a complete rhyme.

When it was built, it was a little over a mile from "Eugene city," but now it's part of a very close-in neighborhood with the streetcar-era grid intact.

A little over a century after those Classical Revival houses were in fashion and built, a different kind of classical revival seemingly took root here, and it was decidedly more regional with strong local flavor.

You might recall a talk in 2011 at the State Library when ODOT historian Chris Bell talked about a restoration of a Conde McCullough bridge near Crater Lake. The column ornaments had been a bit of a mystery, but he was able to match drawings to an existing column on the Historic Columbia River Highway. The Stark Street Viaduct had been built a few years earlier, but it also used the same columns. So modern replacement parts could be made.

Bell called the pattern "the Pineconian Order," a variation perhaps on the Ionic. (More on the restoration here and here - McCullough's original design was altered apparently, so it's not a "pure" McCullough.)

This had seemed like a one-off whimsy, but it's definitely a thing!

On the pilasters and column ornaments for UO's Gilbert Hall (aka Commerce Hall and Anstett Hall), Ellis F. Lawrence also used a variation of a "Pineconian Order." 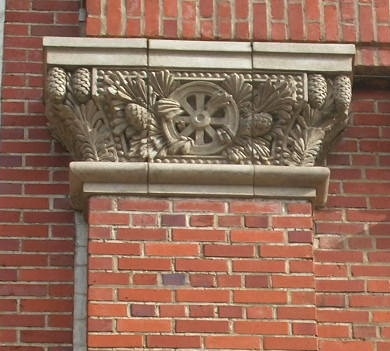 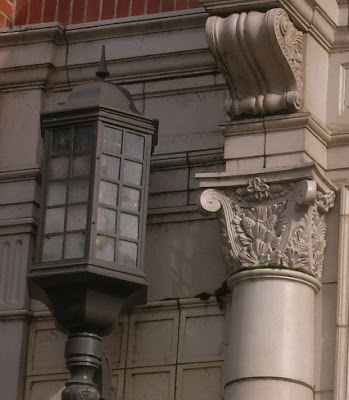 The bridge dates from about 1923 and Gilbert Hall from 1921. A casual google turns up pinecones used as finials, but not so much on columns and as variations on classical orders.

Do you know anything about this? There must be some architectural history writing on what looks like it could have been a regional style or fad. While the Order isn't really Art Deco-y at all, it also feels of a piece with the ways that WPA-era and other mid-century art sometimes looked to vernacular tropes or regional themes.

Timber was a hugely important industry, and it seems right to have incorporated tree motifs with cones and branches into Commerce Hall's ornamentation. (Though are these actually fir and not pine cones?)

With Elliott Forest in the news, the loss of Federal Timber Payments to Counties, and questions about how best to balance ecosystems with sustainable harvesting, it's a reminder of how important the forests remain today.

It's a bit of a slow news week, so here's some filler that might be a little interesting.
Posted by Salem Breakfast on Bikes at 12:01 PM

Slow news week? So you are not going to cover our Mayor's State of the City speech and his interview with Jonathan Bach of the Statesman Journal where said such things as tolling the existing bridges would be "illegal", and that they new bridge might be "free" and that there is not a plan to toll bridges in Salem. How about his speech, where he compared efforts to plan the 3rd Bridge with an example of 19th century MASS TRANSIT!