Council meets on Monday, and while it may not seem like a very important thing, a routine and dull thing in fact, the update to our Natural Hazards Mitigation Plan could actually be a powerful thing, and it seems like it is currently neglected.

The City will engage University of Oregon to update its Salem Natural Hazard Mitigation Plan. It's updated every five years, and the current one, from 2012, is due. When it came out last time, it seemed like it did not give sufficient attention to earthquake preparedness, and dwelled more on flood. Flood of course is more frequent and predictable, but the big earthquake will be more catastrophic. Our risk-assessment does not seem to have captured this adequately.

Focusing more on earthquake and what institutional and municipal investments we should be making in advance of "the big one," as distinct from small-scale privatized and personal "duck and cover" efforts, seems like it should be much more important that it currently is. Maybe this iteration of the plan can highlight this.

There are several traffic items also to note.

Council will apply to renew a $9,000 grant to perform crosswalk education and enforcement activities.

It's nice the funding is available, but it's increasingly clear that the way this is framed up, it is an amenity, an extra, something outside the core mission of public safety. There's probably nothing to be done at the moment, but it is a sign of our priorities.


at the intersection of Cordon Road SE and Gaffin Road SE...

So here it is being conducted on a "pay as you go" basis by development, but it still seems like the investment on the edges is not likely to generate returns in the long-run and instead will be a municipal liability and drag.

Also on the agenda is initiating the process to Acquire property along 12th Street between Hoyt and Fairview where a key sidewalk gap will be filled - but also some additional widening for cars created.


There are information reports on two decisions regarding the affordable housing project at the Rose Garden/Epping site on Portland Road.
While the neighborhood association did not submit a formal set of objections, some comment focused on a wish to wrap the project in a 10-foot opaque fence and to eliminate the driveway access on Highway Avenue, making the only access off of Portland Road. To make it even more of a gated enclave, in other words. Staff and the Hearings Officer did not agree. It will be interesting to see if there is further wrangling and an appeal over any of this.

The Urban Renewal Agency will also get an update on the downtown grant program, which has come in for some questions and criticism in light of the subsidy for the Park Front building.


The grant program was modified in 2014 to the current Capital Improvement Grant Program, which requires a minimum project cost of $10,000 and provides up to $300,000 in grant funds based on total project costs. The types of costs eligible for funding were expanded and program objectives were created to maximize the benefits and leverage achieved from a public/private project investment. Grant requests that meet these guidelines are administratively approved by the Director of Urban Development. Exceptions are presented to the Agency Board for approval. Attachment 2 is a summary of the Capital Improvement Grant Program recipients from the inception of the program in May 2014 to date. The Downtown Advisory Board is currently developing additional criteria for grant exceptions which will be presented to the Urban Renewal Agency for consideration and adoption.

The report, however, is missing any kind of feedback or assessment loop: Which of these grants overperformed and which underperformed? Are Salemites getting their money's worth?

We do we just list them and not try to figure out which of them were most effective?

Take the $76,000 that the City gave The Kitchen for "interior renovations." The Kitchen has gone to a 24/7 model, and that seems to be a real success, spurring a spin-off expansion and being a key player in the downtown nightlife and dining ecosystem. From a December SJ piece:


Soon, fans will get those brioche doughnuts next door, as well. The round-the-clock service at The Kitchen on Court Street proved so popular that Malherbe signed the lease in October on the former Tryst salon space for a second 24-hour restaurant. This new spot, which has no opening date so far, will specialize in to-go sandwiches, pastries, and espresso as a part of The Kitchen brand.

While The Kitchen specializes in full-service American dining and breakfast all day, the cafe next door will be more of a to-go pastries, sandwich, soup and coffee place when it opens. That way, the two restaurants can serve specific niches.

[Jesse] Hayes, the owner of Archive, thinks that since restaurants with a very specific clientele or purposes have opened, downtown business has surged. 1859 Cider Company, he notes, only serves unique craft-made cider. Coin Jam’s identity as a 21+ arcade and grill provides a singular experience for Salem’s geeks and gamers.

Hayes, who grew up in the Salem area, says as the population grows, businesses that “don’t shoot for the middle" will help the overall community grow.

"Salem doesn't realize that it's big enough for niches," Hayes says. "It's a new approach to downtown, and there's a lot of traction headed in that direction."

Even in the absence of accounting data on payroll and cascading economic effects, that right there seems like pretty resounding anecdotal evidence for success with the Urban Renewal funds and their goals! The project has had a network effect, leveraging or reinforcing other efforts.

The Kitchen was also a risk. Was Salem ready for it? That underscores the usefulness of the Urban Renewal investment.

By contrast, it's hard to see much of the Park Front venture as an equal risk needing City subsidy. It's mostly just moving existing businesses with existing client bases to fancier digs.

So a more self-aware and self-critical perspective on the grant funding would be welcome. 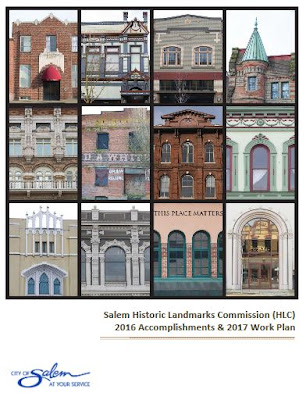 Council will receive an annual report on the Historic Landmarks Commission, but it doesn't have information on demolitions at Fairview or the State Hospital. A stronger report would frankly discuss failure as well as success. What are we doing about the derelict DA White building that is featured in the grid of 12 images on the cover? And positively, more discussion about the renaissance and economic impact of the McGilchrist and Roth buildings might be in order. (In fairness, they do discuss work on the Grand Theater a good bit.) All in all the report is a little Pollyannaish and underpowered, with too much on photo contests and not enough on demolitions.

While there is another work session for the Police Station scheduled for next week, there is also a set of draft ballot measures on the agenda for this week. This seems to put the cart before the horse and the way it all fits together is obscure - unless they are trying to short-circuit the work session debate. Maybe how this all fits together will be clearer as others weigh in.

Finally, N3B had suggested an Intergovernmental Agreement for the Salem River Crossing might be on the agenda, but it does not appear to be before Council quite yet. Drafting it may take a little longer. This morning, N3B suggests has been drafted, but is being delayed because of criticism. (There will almost certainly be more to say on this later.)
Posted by Salem Breakfast on Bikes at 12:01 PM

"So here it is being conducted on a "pay as you go" basis by development, but it still seems like the investment on the edges is not likely to generate returns in the long-run and instead will be a municipal liability and drag."

Thank you for this comment — straight out of "Strong Towns" and Chuck Marohn. It would be nice to hear one of our more enlightened Councilors who heard Chuck Marohn's presentation last October, or watched the video, raise this concern at the Council meeting.

Over at CANDO, they've got notes on action at Council regarding homelessness and a Task Force, as well as Mayor Bennett's revised approach, which seemed much more promising: