City Council, March 13th - Ride-booking: My Way or the Highway

Council meets on Monday and the headline item is the proposed rapprochement with Uber. You could also see it as "surrender."

From the Staff Report:


Uber and Lyft recently prevailed in a legal action to prevent the City of Portland’s release of company ridership data and number of TNC vehicles in Portland, arguing those records are exempt from public disclosure as trade secrets. Under the draft SRC, the City will have access to records of this type, and it is likely that TNC and Taxi Companies will seek to restrict the City’s ability to disclose that information in the event of a public records request. [italics added]

Some recent headlines:
And you might recall some earlier headlines:
And the former Commissioner of the New York Department of Transportation made tart observations about Uber's refusal and then evasiveness about sharing important data:

So our Staff Report says we should expect troubles and non-compliance, and there's a well documented pattern of trouble and non-compliance elsewhere - tell me again why we are in such a rush and propose to give up leverage first rather than making disclosure and other concessions a condition of approval? If Salem has any leverage at all - and we might not as a very small market - we will only have it before service starts, not after.

More from the Staff Report:


Major differences between current SRC and the Draft Amendments:

Let's focus on transit first and let other cities decide whether TNCs really are helpful. Let's help modernize our existing taxi companies that run like normal businesses, making profits. Especially since rides with the TNCs are all enormously subsidized by the VCs and at some point they will have to start making a profit - and fares will rise accordingly.

Salem should consider strongly waiting until the market shakes out and TNCs are charging actual market- and profit-based fares. Then we all will know what are the true capabilities and costs of TNCs, and they will not have degraded transit and existing taxi service in the Salem area through a comprehensive scheme of under-pricing.

We know what Amazon did to Jackson's Books, to Borders, and then to Book Bin East, we know what is happening to Macy's and other department stores. We know what happens when large companies oriented around "disruption" subsidize losses in order to reshape the marketplace.

We have every reason to wait, and very few to rush.

from the Staff Report:


Because development and infrastructure needs are likely to continue to change over the life of the MCIP Plan, staff recommends that the MCIP Plan be amended to include an “other” category for infrastructure projects costing less than 10 percent (equal to $2,600,000) of the maximum indebtedness in the Plan....

The IGA assumed funding for infrastructure projects would come from a variety of sources, including tax increment financing (TIF), development district fees, State land sale proceeds, and developer contributions. The MCIP Plan identifies the list of projects that are eligible for TIF funding. The project list contained in the MCIP Plan was last updated in 2012.

The whole project list was new to see (maybe it had been published before, and we just missed it), and it is a little staggering to contemplate. Unfortunately, there are no cost estimates on each item, so the total scope of subsidy is made invisible. But if you look at the entirety of the list, and assume that the "maximum indebtedness" value of $26 million is still a fraction of the total value of the necessary work, then it wouldn't be surprising for the total to be over $100 million. 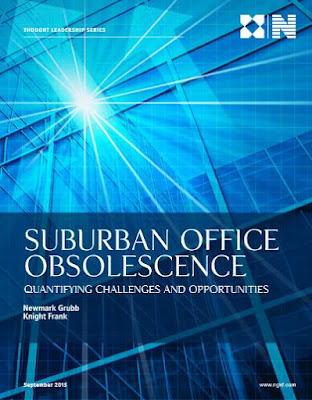 You might remember this report about increasing doubt about office parks sited on the edges of cities.

And Strong Towns makes a case that we need to include future maintenance liabilities and replacement costs in our total accounting of new infrastructure. When it 25 or 50 years we have to fix these things, will the tax base it created in the new industrial park be self-sufficient to fund replacement and maintenance? Or will we have to look elsewhere for those funds, robbing Peter to pay Paul?

In what world is all this stuff going to pay for itself without depleting other municipal resources? Creating and maintaining these things looks like a textbook example of the "growth ponzi scheme."

From the Existing and Proposed Amendments from "Section V of the Mill Creek Industrial Park Urban Renewal Area Plan" (the last item in each series, "other minor infrastructure..." is the proposed addition; all the other items are current):

This is a missed opportunity. What Salem should be doing is pioneering in using networked ridehailing to extend transit in terms of coverage hours and range, either by helping Cherriots start a "public option" TNC (publicly owned and operated by Cherriots) or at least by requiring any private firm who wants to operate in Salem to interface with our transit provider and operate as an adjunct rather than as a competitor.

The whole thing isn't very deeply thought through. The Staff Report is way too short and doesn't say anything about why each policy choice has been made. The proposed regulations are an adaptation of Bend's code, but the Report says nothing about why Bend's was chosen and not another city's.

And as Walker points out, there is no consideration given to how TNCs might fit into the city's overall transportation mix and how strategically we might want to deploy them best.

The current proposal seems reactive and shallow rather than constructive and considered.

Of all the things from Bend that Salem chooses to emulate they choose this.... ....

The Staff Report still says it's version 1, but I think it has been edited significantly since Friday.

"City staff discussed potential changes to the city’s existing regulations with representatives of Uber and Lyft that would encourage their entry into the Salem market. Uber suggested that Salem consider amendments that are substantially similar to an ordinance under consideration by the cities of Bend and Redmond. The city councils of those central Oregon cities have been reviewing the proposed changes to their respective codes, and are likely to adopt nearly identical ordinances in early March."

So, it's clear the industry lobbyist provided language that would be most favorable, and also that City Staff may not have exercised sufficient analytical independence.

Here's the latest from the NYT -

"Uber exists in a kind of legal and ethical purgatory, however. Because its drivers are independent contractors, they lack most of the protections associated with employment. By mastering their workers’ mental circuitry, Uber and the like may be taking the economy back toward a pre-New Deal era when businesses had enormous power over workers and few checks on their ability to exploit it."