One of Salem's gems is at the Historic Landmarks Commission next week. The Byrd House of 1887 is up for a "major historic design review" and it's worth some attention. It is interesting not because of the scope of remodeling on the house, all of which seems defensible and proportional, though at least one house detail is worth calling out, but it is interesting because of the way the proposal and City response slides right over without remark a major autoist intervention on the property.

The Byrd House is in the Court-Chemeketa Historic District. It is not on its original site, however. According to the nomination materials:


This Queen Anne/Eastlake style house was built in 1887 at 197 Court (northwest comer of Court and Church) and moved to its present site, the southwest comer of 14th and Chemeketa Streets, in 1906. The cost of moving and "enlarging" the residence was $750, according to the Statesman.

It is a one-and-one-half-story structure with most of its Queen Anne/Eastlake details and patterns intact. The complex roof line incorporates a flat-topped, hipped roof that rises to a hipped peak toward the south and gives way to a front-facing (west) gabled bay and side-facing gables on the north and south. The south gable is capped with a hip. Two elaborate brick interior chimneys add to the variety of roof forms. In addition, the house originally had extensive roof cresting, now limited to the porch roof. Elaborate decorative woodwork ornaments the gables, windows (capped by finely carved pediments), and indeed most of the wall surfaces: the horizontal shiplap is varied with vertical boarding along the upper walls above the windows. An attached three-bay porch with a dropped roof faces west at the north comer. It is balustraded and columned with turned supports, with the columns bracketed at the top. The oriel windows on the south and west originally were crowned with balustraded second- story porches, now removed. There is a one-story shed addition at the rear.

Cultural Data: The house was built by George Collins and bought a few years later by Dr. William H. Byrd. He had been born in Marion County in 1854, the oldest of eight children of Lorenzo A. and Martha (Savage) Byrd. Lorenzo Byrd crossed the plains in 1846 and settled on a donation land claim in the Waldo Hills. The homestead was purchased in 1850 by Dr. John Savage, who came to Oregon in 1850. His daughter, Martha, married Lorenzo Byrd in 1854.

Their son attended local schools, read medicine under the supervision of Salem doctors, studied medicine in San Francisco, and earned his M.D. at the Willamette University medical school in 1881. He practiced in Salem for nearly 50 years. He married Theresa Holderness of Salem in 1882, and they had a daughter, Winnifred, who became a prominent musician. After Mrs. Byrd's death, Dr. Byrd married Margaret Marcum in 1890 and had two sons, Clarence and Donald. Dr. Byrd purchased the lot on which this house stands in Watts Addition in 1905 and moved the house to this site the next year. He bought adjoining lots to the south in the next few years and built three Craftsman Bungalows now located there in about 1910. He seems not to have lived in [the house] after he moved it. It was given as a wedding gift to Clarence in 1921....Dr. Byrd died in 1929. [inline citations removed for clarity]

(It's beyond our scope here at the moment, but there might be a transportation story to return to! There are photos of Byrd with a bicycle and also with a 1909 Buick automobile, as well an an image of Winnifred at Nye Beach with a car. We could probably see the outlines of his transition from walk/bike/streetcar to automobile. Maybe we'll come back to that.)

If you've walked by it at all, you'll have noticed the house has been vacant for much of the last decade, has been for sale several times, repainted two or three times, and generally been in search of some love.

One of the biggest alterations looks to be the removal of an "unstable chimney" from roof to basement. Above the roof it's mostly hidden by trees and the slightline angle - but look at it! That's some fancy masonry, and it will be a real loss. The State is not requiring reconstruction as part of the building rehabilitation, and the City concurs with this allowance. The larger "primary" fireplace and chimney is being restored, and staff judge this sufficient to maintain "integrity."

More interesting here is the proposal for a new driveway and curb cut. The corner lot on which the house sits has been subdivided previously, as it lacks alley access, and originally would have had access. Without a detached garage on the alley, there is no provision for off-street car storage.

As part of its identity, however, the Court-Chemeketa Historic District has defined itself against the "intrusion" of cars and traffic, and specifically highlights the alleys:


Despite its proximity to downtown Salem, the district is relatively well-protected from the severe impact of traffic because of the nature of its geographic and man-made boundaries. Mill Creek provides Court Street with a dead end to the east and protects Chemeketa street on the north between 14th and 17th streets.The uninterrupted stretch of Court from 14th to 17th streets helps to provide the district with a firm southern edge. The closures of Court and Chemeketa streets deflect through traffic to and from the downtown area and are planted buffer zones helping to define the district. The major intrusion is 17th street, an arterial running north and south through the district for a distance of approximately two blocks. Apart from this intrusion; the area in general is a quiet residential zone....

Collectively, the numerous automobile garages and general-purpose sheds which serve the houses of the district contribute to the district's character on a subordinate level. Typically, the garages are small, box-like frame constructions with gable roofs, and they are usually oriented with their gable ends and entrances fronting an alley. By their uniform scale and serial arrangement at the rear lot lines, they provide definition and design continuity along the district's east-west alleyways.

(More on our uneasy autoism in historic districts at "Defense Against Developer Dark Arts.")

Yet the request for a new curb cut and driveway receives no attention at all in the Staff Report for the Design Review. Without comment, it is apparently automatic for approval. In several places, the Staff Report and Recommending Findings simply ignores the driveway, curb cut, and mentions only the associated fencing. 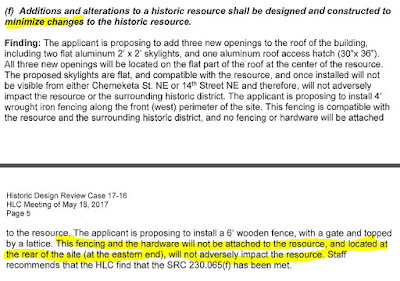 The first Finding (a) even calls out that "the property shall be used for its historic purposes, or for a similar purpose that will not alter street access."

I don't see how you can omit a discussion of the new driveway and curb cut here. This seems like an unambiguous instance of "altering street access."

The other two moments are much more ambiguous. At Gaiety Hollow, the garden and yard is formally defined and included in the list of "historic resources." Here there is no such inclusion for the yard. So alterations to the yard and lot are very secondary, maybe even totally unimportant. In this light it is easy to say "the addition of fencing on the site will not impact the resource directly." The house is the only "resource."

And yet, in the context of the period of primary significance for the Historic District, from 1860 - 1918, a modern curb cut and driveway is in fact a meaningful alteration. Between the streetcar system and the wave of sidewalks and paving in 1909-1910, a particular configuration of transportation is at the center of the district during its "major period of growth" from 1902 to 1910. We have abstracted the forms of the houses and buildings from the transportation technology and patterns that directly contributed to the urban form and fabric. We insist on historic authenticity for windows and doors, but we are freely ahistorical with regard to streets and cars. Transportation is a real blind spot for historic preservation.

The Court-Chemeketa Historic District is very walkable, and I'm not sure it's necessary to start installing new driveways and curb cuts inside of it. I'm also not sure that this is a reason to insist on modifying the plan by removing that element. Since the house languished for so long, maybe the driveway is a reasonable trade-off for someone willing finally to invest in the house. This is not clear cut and it does not seem wise to be dogmatic about it!

But I am sure that the driveway and curb cut deserve explicit analysis and discussion at the "street access" criterion and perhaps also under other criteria. The Review and Findings should grapple with them and shouldn't be silent.

When it's someone else's car and traffic, we criticize them as intrusions, but when it's the owner's car and traffic, we bend over to accommodate them. In general we should be more self-aware and more critical about just what exactly we want to do about traffic, cars, car storage, and the streets themselves.
Posted by Salem Breakfast on Bikes at 1:30 PM

I am happy to see interest in this abandoned house and glad to learn that there is a bike coalition. One of the biggest reasons we chose this house was its relative walkability, but the state of the sidewalks, bike lanes, and the one, dreadful skate park/homeless encampment suggest to me that you have an uphill battle before you.

You seem to have gotten hold of an earlier draft of Thursday's proposal. The final version did not include any curb cut or off-street parking, which is why there is no HLC response. In earlier drafts, I had asked permission to coordinate a curb cut with Public Works, which claims they are replacing our sidewalk this year. I didn't want them to replace the sidewalk only to tear it up in a few years, but the HLC cannot review that request without full architectural plans and permits, which I cannot afford to provide them at this time. You can get an updated version from the HLC or email me directly and I'll send it to you.

As for the fence, the final design will depend on many factors, but especially on the wishes of my wonderful neighbors. Like adding a kitchen and garage, a full perimeter fence may be several years away.

Thanks for the update and clarification!

You bet. Stay safe out there.

Over at On the Way there's a nice update with photos on the interior remodel.