Council meets on Monday, and they'll be thinking about two big ways to juice activity in Riverfront Park.

There is an update on the Rotary Amphitheater project, including sheets on each concept.

Probably in part because of the lovely, moody lighting represented in this moon scene, I have kept returning for several weeks now to the first concept by CB|Two. Apart from the mood, I like its asymmetry, the graceful swoop of its lines, and especially the ramp and secondary level on the right side, towards the river and slough. There may be practical considerations that limit it as a performance space and municipal amenity, but as an instance of public architecture, it swells with the most possibility and energy it seems to me. Anderson Shirley's concept is plainer and draws less attention to itself, and that has merit too. The other CB|Two concept belongs at Pickathon! It doesn't seem right for here. And the AC+CO concept looks like a wind-mobile and weather station, all decked out with vanes and other ornament. It is too baroque and does not seem like it would age very well. (What are your favorites?) (And Update: See bottom for details on the winner.)


Final concept renderings from architectural firms are due to the Design Committee in early September. The Design Committee will select a “Preferred Design” on September 21, 2017, which will be forwarded to Salem Parks and Recreation Advisory Board and City Council for final approval in October. 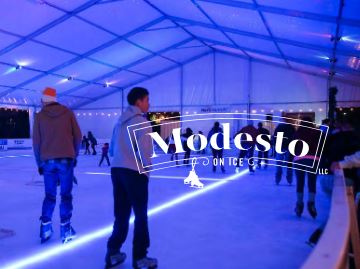 There is also a proposal to pilot an ice rink in Riverfront Park during the winter. The group applying for it has operated one in Modesto with success apparently.


1. Staff have met with Troy Acor, a representative of Salem on Ice, LLC, on several occasions to review proposed plans, develop appropriate language for an agreement, and identify permitting requirements and approvals necessary to undertake the project. Community Development Department Planning Division staff has evaluated the proposal and Willamette River Greenway requirements. Building and Safety staff has provided information on permitting requirements. Public Works Department Recreation Services, Parks Operations, and Engineering staff have worked with Salem on Ice to define the proposal and develop terms to mitigate impacts to the park and its turf.

2. Sufficient power is available on the site through the installation of a temporary service. The proposed agreement requires electrical service to be separately metered and paid directly by Salem on Ice, LLC.

3. The proposed agreement obligates the City of Salem to provide water for making the ice. The City will also install a sand cap on the site prior to installation of the facility, to support turf restoration in the spring. In the proposed agreement, these services are to be provided without charge to Salem on Ice, LLC.

4. The agreement is structured to be a one-year agreement, with up to four annual renewals, based upon mutual agreement of the parties.

"Turf restoration" sounds a little forbidding, but you might remember that even something as wonderful as the "Before I die" project in Riverfront Park during January 2013 was not able to sustain a steady stream of activity in Riverfront Park. Especially in winter, the park space is an ornamental emptiness.

Over on Facebook there is already a good bit of enthusiasm for the idea, and it seems like something totally worth trying. I suppose it could end in a fiasco, but this is the kind of seasonal activity that would really complement the carousel and park in winter. Even if turf restoration turns out to be more costly than the City supposes, it seems like a good risk with solid upside potential.

Bullets for the rest:
Postscript, Sunday the 27th

The updated forecast is for a lower crest - but also more persistent. 68 feet rather than 75 feet, but over 48 hours or more, out to Wednesday. (Update - Well, it's forecasted to be catastrophically more persistent now. Some areas are expected to be under water for more than a month.)

Rotary announced that a revised version of the second CB|Two design, now called "Basket Weave" is the winner. 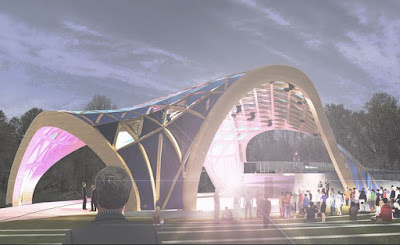 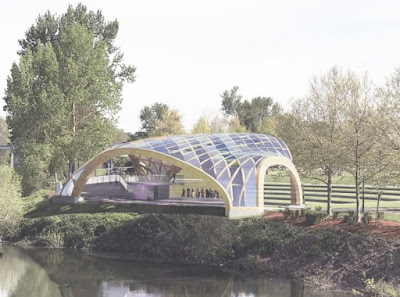 I will say that I really like the Anderson Shirley submission, for its aesthetics and practicality. It is buildable, useful all 4 seasons, and attractive.

The AC+CO submission brings to mind the concept of "magpie architecture." The rain shadow is entirely wind dependent, solar shade will wander both by hour and season, and, frankly...it looks brutish. Buildable, impractical, and sorry, but I find it ugly.

But then, I think that rain is wet, so who am I to say?

It could be that I'm especially attuned to the solar issue because of the eclipse, but I've been to a fair number of venues and the big thing to demand from all the entrants is "live" video simulations of the views from all sections of the audience's area at various times of the day, most especially evening when there seems to be a lot of possibility to have people squinting into the setting sun.

I can't say for sure. I don't find any awareness of how the audience will experience shows in these drawings. But what I've learned is that architects all too often can fall in love with their designs and design them for each other and for competitions, showing how creative they are (especially how the table top model looks from above), rather than how the thing works for the audience.

This is first and foremost a stage, and should be designed to work well for stage and musical performances, meaning that the audience isn't having to fight the ambience or the design, to enjoy the show. Function first. Make the form fit the function, with full awareness of the environment year round. We have to include the winter months, especially as the climate continues heating -- we will be using this thing earlier in the spring and later in the fall than many people realize, especially as we experience more intolerably hot days.

I like an ice rink but, speaking of climate disruption, I hope Salem only approves the ice rink with a hard requirement that the vendor source 100% carbon-free energy (unlikely) or buy renewable energy credits for 200% of the project's actual power consumption each year. Spewing greenhouse gas pollution into the atmosphere to make ice rinks for the amusement of very over-amused and over-entertained first-world people is immoral -- especially since the energy required to keep the rink iced will climb inexorably, year after year, as the planet keeps heating up.

(Edit: Added photo of highway in Houston. In addition to the energy requirements for a rink, as Walker rightly points to, what happens to it if Riverfront Park floods in winter? Anyway, rains in Texas will continue and the magnitude of disaster there is enormous. Flood at Council should get more attention and discussion than a nod and thanks.)

I picked the 200% of actual power consumption for REC purchases off the top of my head and later thought about it and realized that we really should require that any public project energy consumption that is not carbon free must be offset 3-1 with renewable energy credit purchases because even the average well-run thermal energy plant dumps two units of waste heat for every unit of delivered electricity.

I few years ago the City had an event at the amphitheater that I attended. What I experienced is a place that is hot in the summer and hard to walk to and around. One of the things that was unfortunate was that you went from sitting in the hot sun, to squinting into the setting sun. Without some effort to make it so that you can sit and see comfortably, I am not sure that any of the designs are addressing real life. Made me wonder if any of the architects had even been to an event at that location.

The other thing that I realized is that if you are in a wheel chair or have to use a cane, the access is very limited and in some ways prohibitive to those people. Kids might love the area and some able adults too, but for me as an older person, I can't see myself feeling welcome there. At the event I mentioned, there was a person receiving an award who was in a wheel chair and it was clear no one had thought about designing something for people like her.

Then the last thing that needs to be considered is how the sound carries out to the audience. Currently the sound only is clearly understandable if you are directly in front of the speakers. If you were not able to sit on the grass and needed to sit off to the side near the sidewalk, you would have a very poor experience.

So, aesthetics is not my main concern as a user of the park. I am concerned more about the experience as a whole.

That said I do like the last Anderson Shirley design in many ways, but I guess I could see potential in the first CB/two design if they dealt with the sun in your eyes issue.

It appears that the Rotary amphitheater already is a "done deal," but, I hope I'm wrong about that. There is no demonstrated need for such a structure, all of the proposed designs would mar what is now a wonderful and unique natural setting, and none of the project drawings show the fencing that will surround the structure. Certainly, the Rotary organization and the City could come up with a more meaningful and functional investment in our Riverfront Park -- for example, a pedestrian and bicycle bridge connecting downtown Salem with the park.

Updated with pix of the Rotary's winner, "Basket Weave." Still has to go to Council for approval.

Weekend news is that it is going to be the "Gerry Frank" amphitheater. Not sure how this works with the Kalapuya theme - but there it is.