Though it'll appear in print on Sunday, last night online the paper posted a walking tour of some old Salem transportation sites circa 1917. (Map here.)

A favorite among the images was this stables business where the Liberty Parkade is today.

In the Library's collection, there's a somewhat later image of the same building. Its business model had transitioned from horses to cars.

And the site today is still dedicated to car storage.

There might be more to say after Sunday. The constraints of a newspaper column mean that there's lots that had to be left out. Nothing on bicycling, bike dealers, and their related buildings for example! The Vick Bros garage is still around as a few other early garages. Anyway, more in an update later perhaps. (Here are posts tagged "Wheeling: Old-time Biking," including notes on Harry Scott, Watt Shipp, Paul Hauser, Otto J. Wilson, Arthur Moore, Ben Taylor, and Myra Albert Wiggins.) 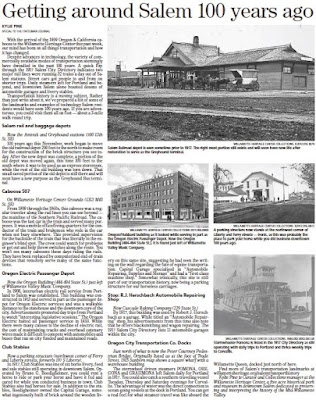 updated with clip of print version