It seems like there is an unusually high number of interesting meetings this week at the City!

Now that we have a new "Strategic Plan," the annual budget process is undergoing some changes and the Budget Committee will kick off the new cycle on Monday at 6pm in City Hall. (Agenda and meeting packet here.)

In the backwards-looking update on the adopted 2018 budget, there's a discussion of some $400,000 budgeted for an update to the Comprehensive Plan, which will include "a physical vision for where future growth will occur." There is an opportunity for better coordinating transportation planning with land use planning. 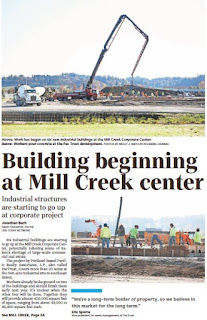 Yesterday there was news about six new spec buildings going up at the Mill Creek Corporate Center.

You already know about the Amazon warehouse there.

This part of town is utterly car-dependent.

With Kuebler/Cordon and other busy roads, as well as the straight-line distance from residential neighborhoods, walking and bike is not realistic. Bus service is infrequent.

Meanwhile, Panasonic/Sony nearby has closed.

We have plopped down this major cluster of big box development without any plan at all for connectivity other than drive-alone trips.

More generally, as we push new development to the outer edges of the city and Urban Growth Boundary, we have not seriously asked about the transportation burden on the City and on individuals. Especially when we are also handing out Enterprise Zone tax abatements.

Back to the budget committee itself, as I read the summary update, spending that $400,000 for the actual planning process is on hold while some groundwork priors are settled. This Comprehensive Plan update will some an important thing to watch.

And it will be interesting to see how the Strategic Plan really functions. Most of the praise for it has concentrated on individual projects called out in the Plan, like the Environmental Action Plan. But its higher level principles have not generated much praise, and it is these that have seemed too generic to yield actionable direction for the Committee. We will see.

The City Council Public Transit Committee meets in Public Works on the 3rd Floor of City Hall on Tuesday at 6pm. On the agenda:

In the past session, Senator Courtney introduced SB 10, which would provide for Governor-appointed Transit District Board members instead of elected members. It died in committee. So it's not exactly clear why it is being discussed again, and what exactly this has to do with improving Salem transit. Maybe it will be reintroduced in the short session next year. Maybe something else is going on. Might be something to watch.

Cherriots has also sent out a survey to ask people on what they want to use the new funding. You can complete the survey here. Its results will obviously be helpful both to the Committee and to Cherriots.

The Planning Commission meets on Tuesday at 5:30pm, and they'll conduct a Public Hearing on the Lansing-NESCA neighborhood plan. (Agenda here.) They'll also get updates on the Housing Needs Analysis, which checked off the ADU piece, but still has the larger pieces to go; and on the West Salem Business Disctrict Code Clean-up (see previous note here).


These neighborhood plan updates are interesting, but it's difficult to understand just what exactly they do. It's not clear how much they actually shape neighborhood development. When an actual, quasi-judicial land-use matter comes up, no matter how much we might appeal to a neighborhood plan to shape the decision, the actual decision criteria are independent of the neighborhood plan. Maybe more to the point at the moment, if the plans are advisory and non-binding, why do we wrap them so tightly in the Public Hearing process? It just seems like a lot of hoopla and process for a document that doesn't actually do anything. They get a small subset of neighbors involved, but they almost certainly oversell their actual effectiveness.

I can't get the final draft to load from the City site. Interestingly it is some 77mb in size, and the draft from this summer was only 13mb. Maybe there is something wrong with the file. Here's the City's project site and a previous note on it here.


All are welcome to come to a Public Archaeology Open House on Wednesday November 8, between 10 a.m. and 2 p.m. to learn about newly unearthed secrets of Salem's history. Willamette Professor Scott Pike will lead his students in an excavation of the immediate area around a rediscovered Chinese funerary shrine in the Salem Pioneer Cemetery located at Commercial St SE and Hoyt Street SE.

Due to very limited parking, attendees should park along Hoyt St S and walk to the cemetery [up the hill to the corner at Skopil Avenue; it is a little misleading to talk about the Cemetery at the corner of Commercial and Hoyt, as there is no entry there] With the wet weather, mud-ready footwear is encouraged. Visitors are reminded to be respectful of gravestones, walkways and other people. Rubbings are not allowed as they are dangerous to both the person doing the rubbing and the delicate, old gravestones.

Records from the original cemetery owner show that the first Chinese burial in the cemetery was likely between 1864 and 1870. In 1901, about a dozen Chinese people were buried in the Chinese section of the cemetery. Burials continued through the 1930s until the last record disinterment of remains in 1948. The area soon became covered in brambles and attempts at cleaning the area were made in 1953 and again in 1963. Sometime between 1963 and today the shrine was destroyed. 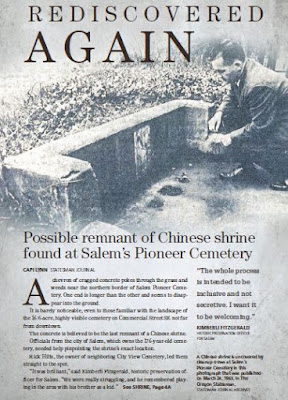 
On Wednesday, November 8, from 2–4 p.m. at Center 50+ [at the intersection of Highland Avenue, Portland, Silverton, and Fairgrounds Roads] the City will host a panel discussion on Transportation and Connectivity for Salem's older adults. This will be the first in a series of meetings discussing livability in Salem. Residents are encouraged to attend and participate.

For more on the Age-Friendly Initiative, see here.

The Citizens Advisory Traffic Commission meets on Wednesday at 6pm in Public Works on the 3rd floor of City Hall.

They'll get a presentation on "Neighborhood Traffic Management Program Minimum Requirements." There's no material beyond the bare agenda, but maybe there's an opening here to talk more about traffic calming, traffic diversion, and a 20mph speed zone on residential streets.

CATC is one of the most under-utilized City commissions, and at some point it could be a real site of advocacy for a more balanced transportation system.

The Public Art Commission also meets on Wednesday at noon in Public Works on the 3rd floor of City Hall.

They'll be talking about the new Police Station, about a proposal for a mural sponsored by the Oregon Environmental Council commemorating the Bottle Bill, and about restoration on the Eco-Earth Ball in Riverfront Park. (Full agenda and packet here.)

Public art for the Police Station will be particularly interesting, with opportunities both outdoors and indoors, and hopefully some installations fully site-specific and integrated with the design, rather than decoration applied afterwards.

(The City's calendar also lists a couple of things for Thursday that might be of interest, but no agenda are posted. Maybe more later.)
Posted by Salem Breakfast on Bikes at 12:01 PM

Agree 100% with your observation on Neighborhood Plans...they are worthless as tools for actually doing anything but creating expectations that are most likely not to happen unless a private property owner agrees. And they often are useless in land use cases. In my 25 years of doing land use, I think there has only been one time I can recall that the Neighborhood Plan helped change and outcome.

Plus, those plans cost a lot of money. I think the last time I looked it was about $50,000. You could do a lot of good in a community with the $100,000 plus that they waste on these Plans each cycle (doing two at a time).

BTW, I am reminded of all the wonderful research you do for all of us when you write these most informative blogs. I learned several things just in this one post! Thanks