At the MPO: Vetting Projects for $5 Million Continues

The Policy Committee for our local Metropolitan Planning Organization meets tomorrow, Tuesday the 28th, at noon, and they'll be reviewing several big items, including updates on the Public Participation Plan, the entire 2018 Work Plan, and the vetting process for the current round of project applications.

Applications for the $5 million

Earlier this month the Technical Advisory Committee began scoring the project applications, and some of the drawing details are a little interesting.

The County doesn't seem to be all that interested in making Center Street between Lancaster and 45th very inviting for non-auto travel.

The designs they are showing intend a future with five lanes of car traffic, too-wide travel lanes that encourage speeding, and an odd multi-use path instead of fully realized sidewalks and bike lanes on the north side. The project is very clearly about cars-first.

In the City of Salem's application for the McGilchrist project, they are a little oblivious maybe about the attractiveness of vintage 1980s style bike lanes on a street that is expected to have lots of heavy truck traffic. These are concept renderings only, and they will be changed in the final design process, but it would be nice to see something more forward-looking at the inception of the project.

It's always a little odd to see a City of Turner project in the list. On the one hand, small cities deserve funding, but at the same time is encouraging the urbanization of Turner not just a big move in favor of autoism and car-dependency? It is a little strange to see Turner included in the MPO's boundaries. Maybe if the Mill Creek Corporate Center really becomes a big employment center this will not seem so strange.

For the whole list of projects and the opportunity to comment formally on them, see the social media style map with comment fields, and there is a previous post here with a brief description of them. The applications total about $10 million, but there is only about $5 million in funding, so by dollar anyway, half of the projects will not make the cut.

The final recommendations look to be announced in January with a formal Public Hearing and decision in February.

Separately, there is a new project, as an amendment to the formal 2018-2021 cycle for funding, that is a little interesting. The right-in, right-out turn into the Keizer Station Transit Center is problematic, and Cherriots wants to make left-turns possible with a center turn pocket. This involves a whole lotta widening!


The scope of the new project is to construct a new signal on Keizer Station Blvd. at the Keizer Transit Center access road to allow buses to turn left into, and out of, the facility and add a second left-turn pocket and related signal adjustments at the intersection of Chemawa Rd., Lockhaven Dr., and Keizer Station Blvd. so that the left-turn queues will not block the access to the transit center. This project will allow SAMTD to eliminate 4-5 minutes of out of direction travel caused by the current right-in-right-out only access to the Keizer Transit Center. The estimated cost of the new project is $2.8 million, which will be funded using the remaining funds from the original FTA grant, with match provided by SAMTD and city of Keizer.

The project sure seems like it's a lot bigger than it needs to be to provide the buses with the appropriate left-turns.

On the update to the formal three-year Work Plan, there's an item for a Regional Safety Plan.

Over the weekend, the Register-Guard had a front-page article about Eugene's draft Vision Zero Plan. (The SJ picked it up off the wire, and you can read it also in today's paper, though there are no pictures or maps.) 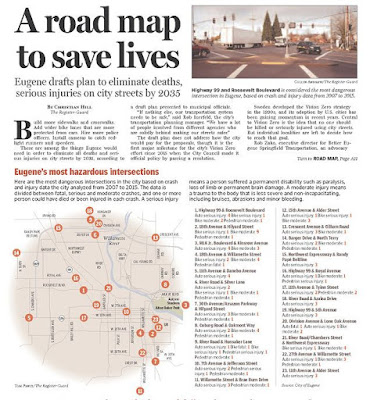 The contrast between their Vision Zero approach and Salem's recent approach to walking deaths - well, let's just say there's lots of upside here in Salem, lots of room for improvement!

It would be great to see the MPO more assertively embrace Vision Zero concepts.

At the same time, retrograde forces at the MPO are strong, and perhaps this remains unlikely. At the last meeting, members of Salem's 350.org chapter spoke in favor of assessing Greenhouse Gas emissions, and in direct response one of the Policy Committee members

Since the MPO and its Policy Committee are bound by an agreement that decisions must be unanimous, just one recalcitrant member can really slow up and even halt valuable projects or ideas. The "consensus" approach functions powerfully to maintain the status quo, and hampers the MPO from responding more agilely to changing conditions and to the exigencies of the future. It is set up to maintain autoism and to be backwards-looking.

SKATS Policy Committee meets Tuesday the 28th, at noon. SKATS is at 100 High St. SE, Suite 200, above Andaluz Kitchen and Table Five 08.
Posted by Salem Breakfast on Bikes at 12:01 PM