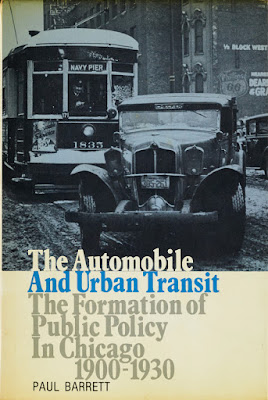 Here's an interesting book! The Automobile and Urban Transit: The Formation of Public Policy in Chicago, 1900-1930. (Have any of you read it?)

It looks like there's an open online edition, so it may be that we'll take a little bit of a tour, since it looks like a fine-grained case study of the development of autoism a century ago. 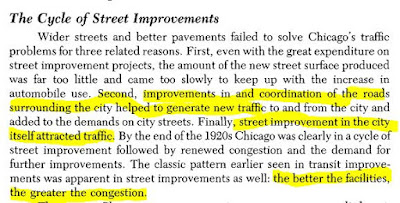 Here's a bit on induced demand:


The Cycle of Street Improvements
Wider streets and better pavements failed to solve Chicago's traffic problems for three related reasons. First, even with the great expenditure on street improvement projects, the amount of the new street surface produced was far too little and came too slowly to keep up with the increase in automobile use. Second, improvements in and coordination of the roads surrounding the city helped to generate new traffic to and from the city and added to the demands on city streets. Finally, street improvement in the city itself attracted traffic. By the end of the 1920s Chicago was clearly in a cycle of street improvement followed by renewed congestion and the demand for further improvements. The classic pattern earlier seen in transit improvements was apparent in street improvements as well: the better the facilities, the greater the congestion. 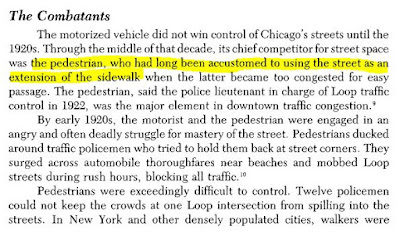 And on the invention of jaywalking as a power move by autoists:


The Combatants
The motorized vehicle did not win control of Chicago's streets until the 1920s. Through the middle of that decade, its chief competitor for street space was the pedestrian, who had long been accustomed to using the street as an extension of the sidewalk when the latter became too congested for easy passage. The pedestrian, said the police lieutenant in charge of Loop traffic control in 1922, was the major element in downtown traffic congestion.

By early 1920s, the motorist and the pedestrian were engaged in an angry and often deadly struggle for mastery of the street. Pedestrians ducked around traffic policemen who tried to hold them back at street corners. They surged across automobile thoroughfares near beaches and mobbed Loop streets during rush hours, blocking all traffic.

Pedestrians were exceedingly difficult to control. Twelve policemen could not keep the crowds at one Loop intersection from spilling into the streets. In New York and other densely populated cities, walkers were likewise too numerous to be arrested, ticketed, or otherwise regulated. Only in relatively uncrowded Los Angeles was some measure of control achieved.

Businessmen and automobile clubs advocated anti-jaywalking ordinances as a solution "There is no more reason for the pedestrian to be permitted to run wild on that portion of the street set aside for vehicles," a Chicago Motor Club spokesman complained, "than there would be for vehicles to run wild on the sidewalks." Indeed pedestrian control was an issue of traffic segregation.